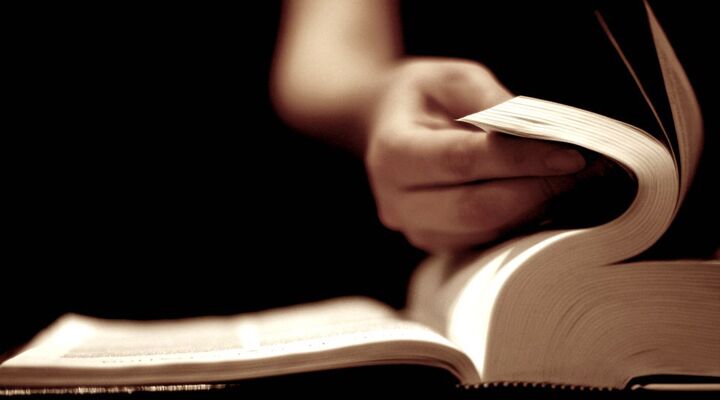 The Philadelphia Trumpet, in conjunction with the Herbert W. Armstrong College Bible Correspondence Course, presents this brief excursion into the fascinating study of the Bible. Simply turn to and read in your Bible each verse given in answer to the questions. You will be amazed at the new understanding gained from this short study!
From The July 2013 Philadelphia Trumpet
View Issue FREE Subscription

Did you know that today’s news—even tomorrow’s—has already been written? In fact, current and future headlines about the United States, the European Union, Germany, Russia, China and other nations were recorded more than 2,000 years ago!

It’s pretty hard for meteorologists to accurately foretell the weather even a few days in advance. But these ancient writers forecasted that Britain and America would rise and fall, that Germany would dominate Europe, that Catholic Europe would clash with radical Islam, and that Russia and China would grow in power and unity. They predicted other specific events that have already come to pass in history and are coming to pass now. And you can find all of these prophecies in one book: the Holy Bible.

How could biblical writers know the future? They had to be divinely inspired.

Herbert W. Armstrong estimated that a third of the Bible consists of prophecy. Fulfilled prophecy proves the existence of Almighty God! It proves that the Bible was divinely inspired, containing revealed knowledge from God that we could not otherwise discover. God challenges us to look within its pages and prove its inspiration by the irrefutable proof of fulfilled prophecy!

Probably the most important pursuit of our lives is to prove God’s existence and the inspiration of His written Word. Today, God is making His existence known to you by showing that His inspired Word—the Holy Bible—is absolutely dependable.

Skeptics have long scoffed at Bible prophecy. The Apostle Peter forecasted that these critics would be especially active “in the last days” (2 Peter 3:3-4). We certainly see critics who mock and ignore Bible prophecy, but beyond that, how can we be sure whether “the last days” are happening right now?

1. In the Bible, the “last days” or “time of the end” is prophesied to occur just before Jesus Christ’s Second Coming. At His first coming, Jesus’s disciples asked Him about His return and “the end of the age” (Matthew 24:3, New King James Version). In what time frame did Christ declare He would intervene and return to Earth? Matthew 24:22.

Let the gravity of those words sink in. If Christ does not return to Earth soon, every last man, woman and child on this planet will be exterminated. Our most pressing modern problem is the threat of nuclear- and biochemical-induced human extinction—and this was predicted almost 2,000 years ago!

This is one irrefutable sign that we are in “the last days.” Never before has man had the capability to destroy every human being on Earth! Christ’s prediction could never have been fulfilled until the 20th century invention and proliferation of weapons of mass destruction.

3. Can any man interpret these prophecies? Verses 2-4. Then who can reveal their meaning? Verse 5. The Lion of the tribe of Judah—the Root of David—is Jesus Christ! He is able to open the seals and reveal what these prophecies mean.

The framework for all end-time prophecies is found in these two books of the Bible that have been unsealed in these last days—Daniel in the Old Testament and Revelation in the New Testament.

The King of the South

One of the most amazing, most detailed and specific prophecies in the Bible—describing historical events up to the present time—appears in Daniel 11. Many Bible commentaries recognize that this prophecy begins with Xerxes’s Persian Empire being overthrown by Alexander the Great (verses 2-3). The step-by-step fulfillment of the rest of this prophecy spans a massive amount of history and culminates in the resurrection of the saints (Daniel 12:2, at the Second Coming of Christ). Here, we shall focus on the end-time “king of the south.”

The prophecy of Daniel 12:1 flows directly from “the time of the end” introduced in Daniel 11:40. Translators should not have inserted a chapter break here. Obviously, there can only be one “time of trouble such as never was since there was a nation.” So Daniel obviously prophesied the same unparalleled world cataclysm that Jesus warned about—the Great Tribulation. When this king of the south emerges, we are perilously close to that time!

The word push means to thrust at or gore, like a horned animal butting someone. Push means to wage war. The king of the south keeps pushing until it prods its European superpower enemy into a war!

3. How will the European power—the beast of Revelation 13—ultimately respond? Same verse. (See page 1 for more information about this “whirlwind.”)

4. Who are the victims of this violent attack? Daniel 11:40, last part; verses 42-43. These verses indicate which countries will be allied with the king of the south.

5. What happens after the king of the north conquers the king of the south? Does he make an alliance with some of the remaining countries in the Middle East? Psalm 83:4-8. To what end? Verse 4.

The goal of this Psalm 83 alliance is to destroy the modern descendants of Israel. Assur, or Assyria (verse 8), is modern-day Germany. Mr. Armstrong taught that the nations Germany will ally with are: Edom—Turkey; Ishmaelites—Saudi Arabia; Moab—Jordan; Hagarenes—Syria; Gebal—Lebanon; Ammon—also Jordan. None of these countries can be the king of the south either.

Egypt will not be part of this alliance because, by this point, it will have already been defeated along with the king of the south. Only two other major Middle Eastern nations are conspicuously missing from this prophecy—Iraq and Iran.

Today, Iran dominates the Middle East. It is the head of state-sponsored terrorism. In Lebanon, Iran arms, finances and ideologically motivates the Hezbollah terrorist organization. In Israel, Iran supports and funds Hamas, a Palestinian terrorist group. Iran strongly influences other Palestinian terrorist organizations as well. Furthermore, the United States unwittingly cleared the way for Iran to gain control of Iraq.

Iran has already implemented a pushy foreign policy against the European Union. Iranian President Mahmoud Ahmadinejad said in 2005 that Israel should be picked up and moved to Europe—specifically to Germany and Austria. The Süddeutsche Zeitung remarked that Ahmadinejad’s “continued provocations scream for a response” and that “European leaders have to be prepared for confrontation.”

Just 20 years ago, the world could not have imagined the kings of the north and south coming out of Europe and the Middle East. Nobody but God could have inspired these prophecies!

The Lesson of Prophecy

1. What does fulfilled prophecy tell us about God’s character? Isaiah 14:24. God’s purpose shall stand because He has the will to see it through. Bible prophecy is 100 percent reliable. God’s reputation is on the line—His Word never fails!

Prophecy comes from the God of love who warns about what will happen, hoping people will repent while they can (Isaiah 55:6) and avoid needless suffering and death.

3. Will God allow catastrophes to come upon mankind without warning first? Amos 3:7; Hebrews 13:8.

Every kind of government man has devised has failed to bring peace. Man has proved incapable of ruling himself. God sent prophets to warn individuals, cities, nations and the world of the results of their evil ways—the results that sin brings. They were to deliver God’s message before God poured out His judgments on the people who revolted against Him and did what seemed right in their own eyes.

God operates the same way today. Does it make sense that He would not send a prophet just before the most severe calamity ever to befall mankind? Of course not—God promises, through prophecy, to give us advance warning so we can turn to God’s ways before it is too late!

4. In the face of imminent danger followed by the soon-coming return of Jesus Christ, what is God’s admonition to you? Luke 21:34-36.

We live in the most momentous time in history! The world powers that God prophesied to be in place just before Jesus Christ’s Second Coming are here now! His true Church that was prophesied to be on the scene to prophesy again (Revelation 10:11) in the last era of Church history is doing so now! Events show that God’s Kingdom on Earth is about to be established!

God, in His mercy, has given us prophecy so we may know where we are and where we are going in the timeline of history. Prophecy is like God’s spiritual clock: It tells us exactly what time it is!

Ezekiel 33 prophesies that a watchman will deliver a warning message from God as Germany rises to power and is about to destroy the modern nations of Israel! Most people don’t believe him until it is too late (verses 30-33).