There is a purpose behind all this suffering. 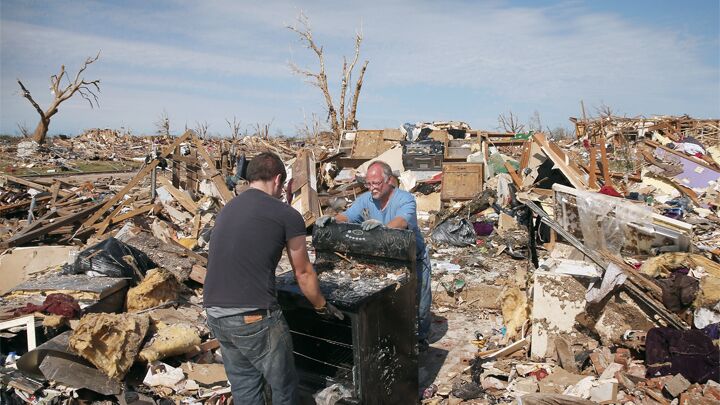 There is a purpose behind all this suffering.

On May 20, about 27 miles south of our offices, a monster 1.3-mile-wide EF-5 tornado tore a 17-mile-long scar through central Oklahoma. It damaged or obliterated 12,000 homes, and devastated businesses and infrastructure. More than 230 people were injured, and 24 died, including seven elementary-school children.

For tens of thousands of people in the path of that whirlwind, this was a devastating tragedy. For millions of people who watched the news coverage around the world, it was deeply disturbing. Yet these types of catastrophes are happening with alarming frequency. More weather disasters, more crashing economies, more crime, more terrorist attacks, more weapons of mass destruction, more wars.

Just like with the Moore tornado, we are helpless to stop these calamities. But these are not just matters of time and chance.

The Old Testament book of Haggai is filled with prophecy about this end time, and it specifically talks about the nations being shaken in our day. In this prophecy, God claims ultimate responsibility: “And I will shake all nations, and the desire of all nations shall come: and I will fill this house with glory, saith the Lord of hosts” (Haggai 2:7). God says He will shake all nations! He says He is allowing or even causing this suffering because of our sins!

Why? What does God want us to learn? He is trying to teach us a lesson. We choose whether to learn that lesson from words—or by a lot of woe.

The Bible contains many specific prophecies about world events—prophecies that are being fulfilled right now! Believe it or not, God gives us these prophecies because He wants us to stop suffering.

If we really believe God, we ought to act on what He says. If we don’t, we are going to have more and more trouble.

Last fall we saw Hurricane Isaac shred the Caribbean and the northern Gulf Coast of the U.S. Then Hurricane Sandy slammed the Northeast with rain and wind. It flooded and destroyed parts of Long Island, Brooklyn, Staten Island and New Jersey.

In April at the Boston Marathon, nearly 27,000 runners represented 96 countries. Two Chechen terrorists, who had lived in America for about 10 years, wanted worldwide publicity for their cause, so they detonated two pressure-cooker bombs right near the finish line. They killed three people, including a child, and injured more than 260 others. Runners and bystanders suffered busted eardrums and injuries from flying shrapnel. Many lost fingers, arms and legs.

That bombing ought to have united America, but it actually led to more division. The Russians had alerted the fbi in 2011 that the older brother was associated with radical Muslims. In 2012, this man took a six-month trip to Russia. The fbi—whose top priority is to protect Americans—knew about it, but, to its own shame, failed to stop him.

The Boston bombers were clearly radical Islamists. But as radical terrorists do the dirty work, the general Muslim community doesn’t stand up to them or denounce them as it should. In fact, evidence shows that a large percentage of mosques in America are led by radical Muslims. Many Muslims in America empathize with the views of these killers.

A decade ago, American Muslim journalist, columnist and author Stephen Schwartz testified before a Senate panel that Muslim leaders estimate 80 percent of American mosques are under Wahhabi control, a strict, even extremist Muslim sect. These people could commit terrorist acts all over America!

Britain’s homegrown Muslim extremist problem is even more well known. On May 22, two Islamic Britons attacked and killed an off-duty soldier with knives and meat cleavers. They did it in broad daylight, just 200 yards from military barracks in southeast London!

Terrorists are certainly coming after the West—especially the U.S., Canada, Britain and the Jewish state of Israel. Who is going to stop them?

The King of Terror

Just after the Boston Marathon bombing, Canadian authorities arrested two Arab terrorists planning to detonate a bomb that would have destroyed a passenger train as it crossed a bridge. These terrorists were from Iran.

Everyone knows that Iran is the world’s number one sponsor of radical Islam. That nation is a safe haven for terrorists. Why? Because nobody has the courage to do anything about it!

In October 2011, Iran sponsored an attempt to assassinate a Saudi ambassador on American soil. America did not hold Iran accountable for it. On Sept. 11, 2012, al Qaeda attacked an American diplomatic mission in Benghazi, Libya, killing our ambassador and three other Americans. That terrorist group is affiliated with Iran. Yet the United States has done nothing in response.

The attacks are intensifying. How do America, Britain, Canada and the other modern nations of Israel react? Time after time, when these bold attacks trace back to Iran, our governments do very little. It seems the West is even afraid to label Iran what it is: the number one terrorist-sponsoring nation in the world! Who in the government or the media even mentions that?

Little Iran—which thinks it’s the mightiest nation in the world—has the West running scared. Is America afraid to go after this terrorist nation because the Iranians could inspire radical mosque leaders within the U.S. to cause more bombings in America?

Iran harbors terrorists who attack other nations, which are acts of war, yet it faces no real consequences because America and the West are weak! The Prophet Isaiah says the U.S. is faint of heart and sick! (Isaiah 1:5).

Daniel 11:40 talks about a “king of the south”—the powerhouse in the Middle East. That refers to Iran leading radical Islam. Iran is the king of the south and nobody is willing to stop it.

There is a solution to all of this if we are willing to be taught by God.

North Korea is taunting America, threatening to launch missiles with nuclear warheads. How has America responded? We asked China to intervene.

China supplies North Korea with most of its fuel and food. All evidence indicates that China is orchestrating North Korea’s actions! What logic is there in asking China to solve the problem it is basically causing? China is actively working against America in many ways, including using cyber-espionage to steal many of our military and corporate secrets! But America doesn’t confront China either, because we’re hoping it will help calm North Korea down. You can be sure China won’t do that—not as long as North Korea’s saber rattling produces such fear in America! China is using North Korea as leverage so it can continue its thievery and other attacks against America!

As nuclear proliferation in North Korea and other nations continues, insane men are getting control of nuclear bombs! This is destined to produce nation-destroying cataclysms!

This is reality! I’m not trying to alarm you about something that isn’t real. Anybody can see that this is an issue of human survival! And America’s feeble response is making the situation worse.

But look again at Haggai’s prophecy. It holds a note of great hope.

Haggai 2:7 can be broken down into three parts. First, it says that God will “shake all nations.” This is a terrifying prophecy that leads into the Great Tribulation and the Day of the Lord. Then it says “the desire of all nations shall come.” What is that desire? The context is about peace—the peace we desire so badly but just do not have.

“I will shake all nations, and the desire of all nations shall come,” God says. You can see that this shaking of nations will actually usher in peace! After God shakes the nations, He will send the Messiah! It’s all tied together. God will make us snap out of our wicked carnality and bring us the peace we desire!

In the third part of this verse, God says “and I will fill this house with glory.” The Hebrew words here indicate that this “house” is a physical place. This is explained in our free booklet Haggai: God Has Begun to Shake the Nations. I urge you to order this booklet if you don’t already have it. It’s an extremely important message for this end time.

“The desire of all nations” in verse 7 is not about only one place having peace. God promises to bring peace to all nations—so all mankind can enjoy prosperity and happiness, a good family life—all the wonderful blessings God has to give.

That worldwide peace begins in this end time at a physical place. This place publishes a message of hope for all nations. The people there understand what God is doing and set an example for this world about how to have real peace. This is a phenomenal, earthshaking prophecy.

God wants all mankind to have peace, but mankind refuses to listen to Him. So we must learn our lesson the hard way, through terrorist attacks, violence and calamity, until we hear Him.

This stupendous prophecy is encapsulated in just one verse in Haggai. But there are at least a hundred other prophecies just like it in your Bible! Ninety percent of prophecy is being fulfilled in this end time because the Bible was recorded mostly for this end time (article, page 24). Yet we hear almost nothing about prophecy in religion today.

God gets very specific about how He will give us peace, joy and happiness. He will shake us so that we realize how arrogant—yet helpless to stop evil—we have become. When we have suffered, we will finally be to the point where we will listen when the Messiah comes. Then He will teach us the way to happiness. That time is almost here! And God is now preparing people to help Him teach this world how to have peace.

This is a dreadful warning, but it is also an inspiring sign. God is going to get this world’s attention!

In Haggai 1:5, God says, “Consider your ways”! The original Hebrew means to deeply concentrate to see what’s wrong with your ways.

Most economists will tell you that America’s $17 trillion debt is very dangerous. David Stockman, budget director under former President Ronald Reagan, said that no nation has everborrowed money on such a scale and survived! If spending continues at the current rate, in another decade the national debt will reach $30 trillion. America prints $85 billion a month. It has already created over $2 trillion out of thin air! Do we realize how dangerous this is?

The Bible says we ought to leave an inheritance for our children and grandchildren (Proverbs 13:22). Yet we have gotten the next generation so deeply in debt they won’t ever dig their way out! That is a great sin in this land! This economic malady afflicts Britain and most of Europe—except Germany, which has more sense and is the powerhouse of Europe.

“Consider your ways,” God says. He’s almost pleading with us. Something is not right! God is full of wrath because of the way we are living!

The good news in all this is found in Haggai 2:6: “For thus saith the Lord of hosts; Yet once, it is a little while, and I will shake the heavens, and the earth, and the sea, and the dry land.” As I explain in my booklet on Haggai, spiritual shaking is already going on right now, and physical shaking is going to intensify to prepare this world and universe for a glorious outcome.

This is all good news. God will bring peace to all mankind. That peace is almost here, and it’s going to last for eternity! Mankind won’t have to endure such terrible suffering ever again. This is a message of tremendous hope! God will soon usher in the peace, joy and happiness we all desire.