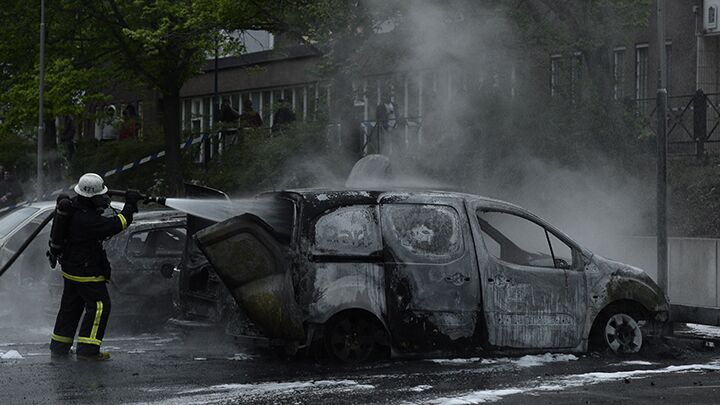 Over 300 cars burn as youth from immigrant backgrounds clash with police.

Young people in Stockholm’s suburbs rioted for their fourth night on May 23, setting fire to schools and burning about 30 cars, according to Bloomberg. The unrest started on May 19, several days after police shot and killed a 69-year-old man wielding a knife.

Buildings—including schools, a cultural center, a bank and a police station—have been set on fire or vandalized. Between 300 and 400 cars have been torched since the violence began. Firefighters said they have “never before seen so many fires raging at the same time.” Eyewitnesses reported that many of the rioters appear to be in their 20s.

While the fifth night of unrest was not as bad as the previous four, signs indicate it may be spreading to other cities across the country.

These riots are yet another social problem directly caused by Europe’s financial crisis.

When times are good, EU nations are able to sustain high levels of immigration with relatively few problems. However, rising unemployment is fueling anger and even hatred among immigrants and natives.

While Sweden’s overall unemployment rate is at 8.2 percent—well below the EU’s average of 10.9—its youth unemployment is high, at 23.5 percent. With unemployment at this level, people begin to blame immigrants: Our children can’t find work, because the immigrants are taking all the jobs.

These sentiments support the growth of the nationalist Sweden Democrat Party. In 2006, the party received 2.9 percent of the vote. Four years later, it reached 5.7 percent. Today, it is the third most popular party in Sweden. In February, its approval level reached a peak of 10.2 percent, before falling back to 6.7 percent. These riots may push the party’s approval rating to new heights.

Natives are not the only ones affected by unemployment. The immigrants are also suffering, with 16 percent unemployed. The 2011 unemployment figures for immigrants between 19 and 24 came in at 35 percent. This means a lot of potentially hopeless youth, ready to rage against the system. The bbc reported that “local people said the motive of the youths making trouble was anger over joblessness.”

In Husby, one of the suburbs with the worst rioting, 80 percent of the population are from an immigrant background.

“The reason is very simple,” said the editor of Norra Sidan newspaper Rouzbeh Djalaie. “Unemployment, the housing situation, disrespect from police. It just takes something to start a riot, and that was the shooting.”

“Rising unemployment and social differences between local and immigrant populations are likely to remain key fixtures of the European crisis,” wrote Stratfor on May 22. “Consequently, the European Union’s more developed countries will be prone to social unrest, increased popularity of nationalistic parties and a widening gap between nationals and foreigners and foreign-born nationals.”

Although Sweden is not in the eurozone, it suffers the same problems of high unemployment and low growth. The riots in Sweden are a foretaste of what is coming to all of Europe.

As unemployment remains high, tension between ethnic groups will increase. This will fuel the rise of right-wing, far-right and nationalist parties.

Ethnic riots resulting from high unemployment will contribute to dramatic change in Europe.