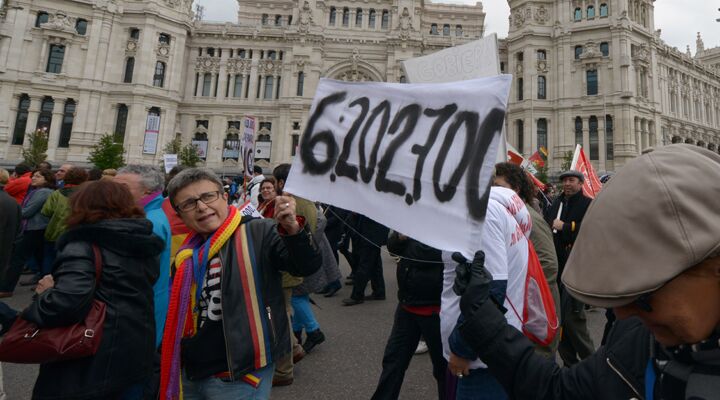 As Europe edges toward mass anarchy and chaos, the Catholic Church is emerging as the key mediator between Europeans and their leaders.

Europe’s unemployment crisis is one everyone knows about, but no one is thinking seriously about.

We’ve all seen the atrocious figures and statistics, the long lines of grumpy, unemployed Greeks and Spaniards. But how many have actually thought about what this means, for Greece and Spain, for Europe, and even for the international community? Historically, mass unemployment has resulted in extreme social and political upheaval, followed by the rise of tyrannical ideologies and government, followed by the outbreak of large-scale war.

Considering the history, isn’t this worth thinking on?

Unemployment can be a frightening phenomenon. When a working-age person has meaningful daily tasks—be it making a cappuccino, laying bricks or creating spreadsheets—his mind tends to be active and occupied. Added to this, the employed person has income, which means food on the table, a roof overhead, clothed children and a hopeful future. Basically, he or she tends to be happier, more content, more stable, more hopeful.

Take employment away and two things begin to happen psychologically: First, as the bills mount and his stomach aches, the unemployed person becomes stressed, anxious and frustrated. Soon, the stress evolves into desperation and hopelessness, even despair. Second, disenfranchised by his deteriorating circumstances—the loss of the family home, his decline in status, marital tension—the unemployed person finds himself emotionally and intellectually vulnerable. The one commodity he does now have is time—time for his vulnerable, frustrated mind to entertain new, often extreme or radical “solutions” that promise to rescue him from the system that has failed him. Dismayed by the status quo, he pines for something new. A new political party, new ideologies, new leaders, new policies—a whole new system.

When unemployment is low, the threat of social unrest and political change is marginal and easily mitigated. But if the unemployment level rises, it creates a veritable army of disenfranchised, desperate, angry people. An army ready and willing to embrace extreme political ideologies. An army ready to support a leader who promises salvation. An army willing to overthrow the established system. When this happens, unemployment is no longer an unfortunate economic issue, it’s a terrifying social and political crisis capable of initiating major catastrophe!

So, where is Europe on the unemployment spectrum?

In Greece, unemployment is just above 27 percent, up from 21.5 percent 12 months ago. Spain’s rate is 26.7 percent. In these two countries, more than one quarter of people who want to work cannot find a job. Unemployment in both countries is worse than it was in America during the Great Depression.

Other European countries are moving in the same direction. Portugal’s unemployment rate is 17.5 percent and rising. Slovakia’s is 14.5 percent and rising. I was in France over the weekend and spoke with three employed friends, each of whom told me that their company would be laying off employees over the next few months. One friend, an accountant who is privy to the finances of numerous businesses, said that nearly all her clients are making plans to lay off employees. France’s unemployment rate is currently 11 percent, but it’s about to get much worse.

These figures take into account only those who are willing and able to work. They don’t include people who no longer receive unemployment benefits. Or people who have given up searching for a job or have taken up part-time employment. They don’t include those in education. And they do not take into account those who have left the country to look for work elsewhere. (I was recently in Cyprus and was shocked by the number of people, especially the young, bolting to greener pastures.) In the last 12 months, more than 1 million have moved to Germany in search of work.

Stratfor ceo George Friedman has a guideline when analyzing unemployment: “A rule I use is that for each person unemployed, three others are affected, whether spouses, children or whomever. That means that when you hit 25 percent unemployment virtually everyone is affected.” By this measure, unemployment is affecting every person in Spain and Greece. In many other states, half to two thirds of the populace is touched by unemployment.

The more we dissect the figures, the grimmer the picture. In Greece, 34.2 percent of individuals ages 25 to 34 are unemployed. Nearly 60 percent of workers between 16 and 24 are out of work. In Spain, the unemployment rate for 16-to-24-year-olds is 57.2 percent. In Italy, nearly 40 percent of under-25s are unemployed. In Slovakia, it’s nearly 35 percent of under-25s; in Portugal, 28 percent. The under-25 unemployment rate across the EU is 23.5 percent. According to unemployment rates submitted to Eurostat, only two European countries currently have an under-25 unemployment rate under 10 percent: Germany and Austria. Europe is brimming with millions of young people disenfranchised by the established system, yearning for change, and ready to throw their support behind someone with radical solutions for a brighter future!

Looking at these figures, it’s a marvel countries like Greece, Spain, Portugal and Italy have not already experienced mass unrest and riots. Indeed, as Ignacio Sánchez-Cuenca, research director of the Center for Advanced Study in the Social Sciences, recently asked: Why have the Spanish people not revolted? For now it seems the masses of unemployed are being sustained on state handouts. This is untenable. What will happen when the benefits inevitably dry up? Already, thousands of people are being cast from their homes and food banks are running dry.

We need to think about this because it’s real and happening right now. Across Europe, and especially in the southern Mediterranean, there are millions of disenfranchised, frustrated people with the time and desire to entertain any person, or party, or ideology that can promise them a return to a better life. This massive army is ready right now to get behind the individual, ideology or government that can promise salvation!

Friedman recently delivered a similar warning: “It is important to understand the consequences of this kind of unemployment. … Fascism had its roots in Europe in massive economic failures in which the financial elites failed to recognize the political consequences of unemployment. [The elites] laughed at parties led by men who had been vagabonds selling postcards on the street and promising economic miracles if only those responsible for the misery of the country were purged. Men and women, plunged from the comfortable life of the petite bourgeoisie, did not laugh, but responded eagerly to that hope. The result was governments who enclosed their economies from the world and managed their performance through directive and manipulation” (March 5; emphasis added). We’ve already seen evidence of this with the rise of far-right and far-left parties in Greece and elsewhere.

On Sunday, Telegraph columnist and economist Ambrose Evans-Pritchard wrote an excellent article on a subject the Trumpet has long been anticipating. Reporting from Toledo, Spain, Evans-Pritchard noted how the Vatican and the Catholic Church are taking a keen interest in Europe’s economic crisis, specifically Europe’s unemployment problem.

Before we note some high points of that article, recall what Herbert W. Armstrong wrote about the role of the Vatican and the Catholic Church in uniting Europe. In August 1978, he wrote: “Europeans want their own united military power! … They have made a real effort toward union in the Common Market. … But they well know there is but one possibility of union in Europe—and that is through the Vatican” (Good News, emphasis his). Two years later, he warned that “world conditions may force European nations … to unite, bringing to pass the revived ‘Holy Roman Empire’ …. [European nations] have wanted to unite politically, with a common currency and common military force, for some time—but have been unable. It can be accomplished only through the Vatican” (Worldwide News, June 1980).

In 1979, Mr. Armstrong described a scenario that is remarkably prescient. “The nations of Europe have been striving to become reunited. They desire a common currency, a single combined military force, a single united government. They have made a start in the Common Market. They are now working toward a common currency. Yet, on a purely political basis, they have been totally UNABLE to unite” (Plain Truth, January 1979). In spite of these conflicting political interests, Mr. Armstrong explained, European countries will find a way to unite. How? “In only one way can this resurrected Holy Roman Empire be brought to fruition—by the ‘good offices’ of the Vatican, uniting church and state once again, with the Vatican astride and ruling.”

Gerald Flurry and the Trumpet have been echoing this forecast by Mr. Armstrong ever since Europe’s economic crisis began: The Vatican will be the glue that unites Europe under German leadership!

Now consider the following recent remarks by Braulio Rodriguez, the archbishop of Toledo and the highest Catholic official in Spain, as reported by Evans-Pritchard. “We have to change direction, otherwise this is going to bring down whole political systems,” he said in an interview with the Telegraph. “It is very dangerous. Unemployment has reached tremendous levels. … There is a deep unease across the whole society, and it is not just in Spain. We have to give people some hope or this is going to foment conflict and mutual hatred.”

Archbishop Rodriguez apparently explained how the Commission of the Bishops’ Conferences of the European Community (comece), a forum of leading European bishops, is currently gearing-up to play a greater role in helping solve the crisis.

About the archbishop’s remarks, Evans-Pritchard wrote: “Europe’s churches are emerging as a powerful pole of authority, filling a vacuum left by political parties of all stripes tainted by the crisis. German leaders may be more ready to heed criticism from the Vatican and their own clergy than from Club Med politicians” (emphasis added).

Note that last point: German leaders won’t listen to other European politicians, but they will listen to the Vatican!

This is precisely the scenario that Mr. Armstrong forecast. You need to watch and think about this. Europe’s economic crises are going to get worse. The unemployment lines will grow, and so will the army of disenfranchised Europeans searching for someone to rescue them. Don’t be surprised if we see massive protests and riots this summer. But as mass unemployment and mass disgruntlement grow, don’t take your eyes off the Catholic Church.

As Europe edges toward large-scale anarchy and chaos, the Vatican will emerge to mediate a new relationship between Europeans and their leadership.