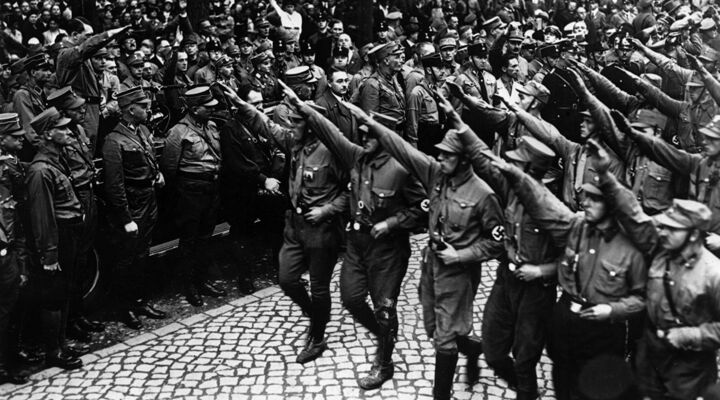 A recent secret meeting emphasizes an increasing focus by Germany on raising its military profile.

From the time that Nazi elites met behind closed doors at the Red House during World War ii to instruct Germany’s top wartime industrialists to revive the nation’s industrial base as a means of preparing for the Fourth Reich in the case of military defeat, secret meetings of the influential in Germany have been part of its rebuilding an imperial future. (The Red House intelligence report is reprinted in full in our free booklet Germany’s Conquest of the Balkans.)

It therefore ought to come as no surprise to read reports of a secret meeting on armaments held recently by the Fraunhofer Society in Baden Wurttemberg.

German-Foreign-Policy.com reports that the secret meeting was held under the title “International Symposium on Ballistics” and “dealt with explosives and projectiles as well as armoring. Media representatives were refused access to the urban congress center under threat of using force” (April 26; translation ours).

Established in 1949, four years after the conclusion of World War ii, the Fraunhofer Society is the largest research institute in Germany. It is headquartered in Munich and comprises 60 institutes, employing 13,000 personnel utilizing a budget of over €1 billion.

One Munich information website claims that “The Fraunhofer Society is very interested in making the results of its innovative research public.” However, it would appear from this latest episode that when it comes to “innovative research” on explosive devices and armaments, any interest in making the results available to the public is curtailed dramatically, under threat of force, to ensure secrecy.

Over the past 20 years following the reunification of Germany, German industry has quietly retooled to become the world’s third-largest producer of military hardware. Perhaps this would not be of any general concern had it not been for that nation’s unfortunate record of instigating mass warfare in its own imperial interests.

Realizing this, German elites have been careful not to disturb public opinion which bills Germany as a democratic state bent on maintaining world peace.

At the same time they have, since the Balkan wars of the 1990s, been carefully building up German military presence in zones of combat over a wide perimeter south and east of Berlin (Daniel 8:9). Inevitably this steadily increasing military effort will involve heightened demand for armaments to resupply German forces as they risk increasing engagement in combat in foreign theaters.

Since former Defense Minister Karl-Theodor zu Guttenberg began to steadily engage public opinion in support of Germany’s armed forces, German elites have been carefully considering their options in respect of the propaganda to achieve this.

As general opinion in Europe is increasingly turning against “the German way” which is proving detrimental to European economies as the euro crisis grinds on, Germans are going to feel increasingly embattled and hard done by, by the rest of Europe.

Add to this the very real threat of Islamist extremism, most especially from Iran, and you have a highly sensitized situation building in Germany which elites will take advantage of to gain public support for an acceleration of German militarization.

There is yet another aspect to this. As German hegemony spreads globally, the German government will have no option but to increase its military power to protect both its resource bases overseas and its increasing foreign assets. This is an inevitable result of any policy of imperialism.

So, whichever way you slice the cake of the perennial German question, the course of imperialist growth upon which the nation embarked immediately upon reunification in 1991 has now come full circle to place Germany back into its inevitable role as a rising military power for the third time in a single century.

Not only have Germany’s industrialists responded magnificently to their orders to revive German industry as the backbone for a Fourth Reich, they are now placing their nation at the very forefront of the technological edge in the latest developments in the armaments trade.

Had German elites held a secret, closed-door meeting on ballistics 50 years ago, it would have set alarm bells ringing in Western diplomatic circles. Yet not even a whimper will be raised in response to this inevitable outcome of the Red House gathering of the 1940s.

This is destined to have but one clear result. A result which the prophecies in your Bible declare will bring great devastation to Anglo-Saxon nations in particular. Read our publications The United States and Britain in Prophecy and Nahum—An End-Time Prophecy for Germany to understand the prophesied outcome of the return of German militarization.

We know that it is said that it’s always darkest before the dawn. Germany is set on a course that will soon turn over one of the darkest pages in mankind’s history. But the good news is, once that page is turned, it will open the brightest of chapters for the future history of humanity.

That reality is revealed in our booklet The Wonderful World Tomorrow—What It Will Be Like. It is a booklet replete with examples of the hope for the future that the Eternal God has planned to enable humankind to fulfill its incredible human potential. Its vision is guaranteed to give you a life filled with hope for the future, a hope which we all drastically need as the clouds of mass public confusion about the future of mankind darken the lives of so many in this day and age.

Study the prophecies that guarantee this brightest of futures for humanity and your life will become one of joyful anticipation, especially amid the increasingly darkened days we shall have to survive in order to obtain it.