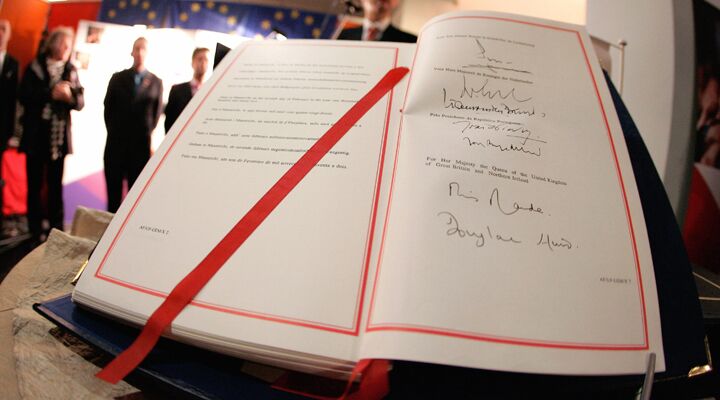 Over two decades ago, after reading the fine print of the Maastricht Treaty—the EU treaty that established the euro—we deduced correctly that any nation signing up to the European Monetary Union, for which Maastricht was the enabling treaty, would be virtually signing over possession of their national bullion stocks to the EU central bank.

Now that has become the reality for the benighted nation of Cyprus. The demand by the European Central Bank for proceeds from gold sales to be channeled to its own centralized coffers is the first manifestation of the golden fangs of Maastricht in action. It may not be the last.

In our September/October 2002 edition, we noted that “when 11 of the present 15 EU member nations joined the European Monetary Union (emu), they signed over their individual national holdings of gold to the European Central Bank, located in Frankfurt, Germany!”

This week, Cyprus came under an ecb directive, its wording confirming the Maastricht edict, requiring it to channel proceeds of any bullion sales to its coffers in Frankfurt.

With this in mind, it is worth considering a theory that has lurked behind the publicity given to the European Monetary Union since its inception. It goes like this:

Gold is great disaster insurance. Predictions of imminent global economic disaster increasingly abound. On this score, it is interesting to note that while a number of countries, including Britain and Canada, were busy liquidating gold assets in the early part of this century, one country was busy buying them up—Germany.

The German central bank holds the second-largest gold reserves in the world. It has not engaged in any form of large-scale selling. A curious thing occurred at the moment in 1999 when 11 of the present 28 EU member nations joined the European Monetary Union, signing over their individual national holdings of gold to the European Central Bank in the process. Coincident with the launch of the euro, Germany bought bullion in a big way.

The timing of Germany’s acquisition of huge amounts of gold was intriguing. “[T]he Bundesbank suddenly acquired massive gold reserves, just as the euro was launched in the first quarter of 1999. The gold amassed, both in terms of its physical size and of its value (national valuation basis) is more than enough with which unilaterally to introduce a gold-backed ‘new deutsche mark’—in contrast to the U.S. dollar, which is not backed by gold” (Economic Intelligence Review, March 2000).

The point is, whether or not the euro is a success in the long run, Germany sits in the box seat. On the one hand, the euro has substantial gold backing from the receipt of bullion by the European Central Bank, courtesy of the emu nations’ signing over of their reserves. This gives some strength to the euro’s backing. Yet the collective economies of emu nations are really not in the best of shape. “It [emu] was meant to be the cornerstone of the single currency. Instead it is fast becoming a millstone. In the face of global slowdown the eurozone’s stability and growth pact is a misnomer. It is failing to deliver stability and may yet threaten growth” (dawn Group, Aug. 14, 2002).

Now, both the European Stability and Growth Pact and the European Central Bank are German ideas, pushed through at German insistence. When an economic crisis in Europe does bring failure to the system that supports the fledgling euro, then, as we have seen, it’s up to Germany to suggest the solutions, within the context of the treaties and pacts that it has largely authored.

The late Christopher Story, financial analyst, posed an intriguing possible scenario in the event of such a crisis developing. He wrote in the issue of Economic Intelligence Review quoted above, “[T]he Germans may have been preparing their greatest coup in history: the sudden, overnight substitution of a ‘new deutsche mark’ backed by gold, for the regrettably ‘failed’ EU collective currency. … [I]n reality, the Bundesbank’s acquisition of colossal gold reserves coincident with the launch of the euro (which policymakers were never supposed to notice), and the convenience of the biggest competitive devaluation in history, betray the probable truth—that this represents the realization of the pan-German plan for a European collective currency elaborated by the Nazis, and was cunningly postulated from the outset.”

Either way, we see the German solution to a bankrupt EU member country manifest in the demise of Cyprus as a sovereign nation and its reduction to the status of a vassal state of the Rome/Berlin axis that controls the European Union. There can be no clearer example of the outcome of the plan to resurrect the German Reich from the ashes of World War ii, initially via economic means, rather than military power.

Herbert Armstrong knew it would be so.

“But even though the Germans surrender, and we gain another armistice, it will be only another recess! The Nazis will go immediately underground—plotting and preparing World War iii” (co-worker letter, Jan. 23, 1945).

“I was telling our radio audience and readers of the Plain Truth about the Nazi Underground before the end of World War ii. They plotted then to come back and succeed in World War iii if they lost the Second World War” (ibid, June 14, 1959).

“We don’t understand German thoroughness. From the very start of World War ii, they have considered the possibility of losing this second round, as they did the first—and they have carefully, methodically planned, in such eventuality, the third round—World War iii! Hitler has lost. This round of war, in Europe, is over. And the Nazis have now gone underground” (Autobiography of Herbert W. Armstrong, Volume 2).

Just how far-sighted was Herbert Armstrong’s prophecy of a resurrection of the German Reich was to be later borne out when an American Secret Service document dated 1944 was published in the press.

The Daily Mail republished the document a few years ago, declaring that “U.S. Military Intelligence report ew-Pa 128 is as chilling now as the day it was written in November 1944” (May 9, 2009).

The Mail stated that “The document, also known as the Red House Report, is a detailed account of a secret meeting at the Maison Rouge Hotel in Strasbourg on Aug. 10, 1944. There, Nazi officials ordered an elite group of German industrialists to plan for Germany’s postwar recovery, prepare for the Nazis’ return to power and work for a ‘strong German empire.’ In other words: the Fourth Reich.” (This intelligence report is reprinted in full in our free booklet Germany’s Conquest of the Balkans.)

Seventy years on, the evidence is available for all to see. Germany is back as the dominant economic, financial, industrial and political force in Europe. As Herbert Armstrong prophesied, Germany has underwritten its comeback not by military force this time, but by sheer economic might!

But that’s only phase one of the German elites’ plan. Phase two is quietly shaping up in the background as Germany increases its deployment of its military forces in fields of combat overseas. Soon, the industrial might that has made it the third-largest exporter of military hardware will be turned to advantage, increasing its own armed strength in preparation for a demonstration that the Fourth Reich is a global force to be reckoned with.

The baring of Maastricht’s golden fangs is but a harbinger of the baring of the iron teeth of the rising empire of the biblically prophesied king of the north.

Watch for the Cyprus precedent to be reenacted in other failing euro economies. As you watch, look for the careful increase in military power of the Rome/Berlin axis, all under the approving eye of an appeasing Anglo-Saxon leadership.

But as you watch, know that these are but signs that the greatest world event of all is very near, even at the doors! (Mark 13:29).

If ever there was a time to watch and pray, it is NOW!

Read our booklet Germany’s Conquest of the Balkans and prepare for the imminent rise of the greatest government of all, one that will literally shove the Fourth Reich and all human governments into the annals of history—the unsurpassable rule of Jesus Christ over the universal government of God! (Isaiah 9:6-7).