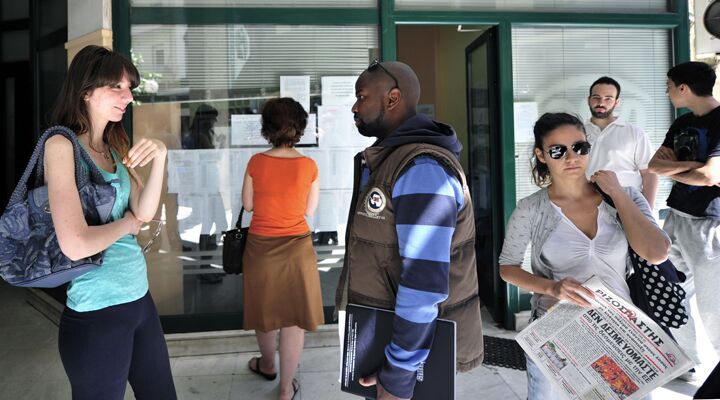 The unemployment figures for November 2012, published by the Hellenic Statistical Authority, show an economy with huge problems. Greece’s young people can expect to study, graduate, and then be unemployed. Getting a job is the exception, not the rule.

These figures only look at people who are willing and able to work. Those still in education aren’t counted. It doesn’t reflect the number of young people who looked at the job market and decided to stay at school and gain a more advanced degree. Nor does it reflect those who left the country to look for work elsewhere.

The total number unemployed is over 1.3 million. However, this doesn’t include those who have been unemployed for so long that they can no longer receive benefits. According to the Greek Reporter, the true figure could be as high as 2 million.

Between November 2011 and November 2012, one third of a million Greeks lost their jobs. Each day, 887 people joined the ranks of the unemployed. One person lost his or her job less than every two minutes.

“We have 250,000 people every day trying to get to the church to find food,” said former Greek MP Eva Kaili. “We’re talking about young people that cant find a job in Greece, that are trying to leave the country.”

These are huge figures, the type that cause huge social upheaval. These numbers equate to millions of frustrated, hopeless, or even depressed individuals and countless struggling families. European leaders may claim the euozone’s economic crisis has been solved. These numbers prove them wrong.

This record high unemployment threatens the survival of the state. It will force major changes in Europe. For more on where these changes will lead, see Trumpet columnist Ron Fraser’s recent article, “A Job for Europe’s Youth.”