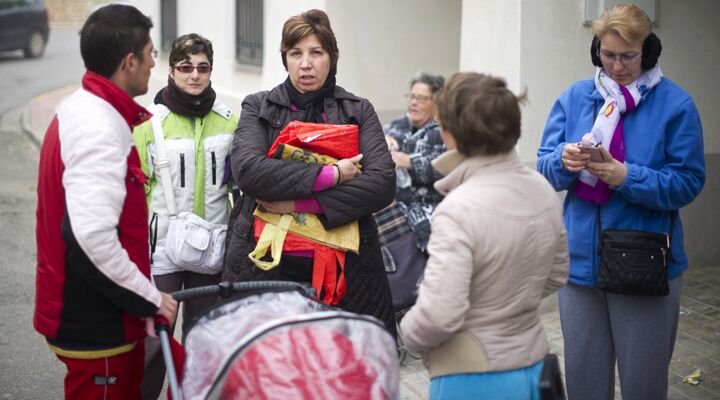 Half of Spain’s young people cannot find jobs. That’s a recipe for chaos.

European leaders are claiming that the worst of their financial crisis is over. They couldn’t be more wrong. The eurozone is on the brink of radical change.

In November, the Spanish unemployment rate for those under 25 was 56.5 percent. The latest figure for Greece is 57.6 percent (November figures aren’t available yet). Over half of all young people looking for work in these countries can’t find a job. One million young people in Spain alone can’t find work. Across the eurozone, nearly one in four young people are without work.

The overall unemployment rates are also dire. In Spain and Greece, one in four adults looking for work can’t find a job. This doesn’t include people who’ve simply given up or taken part-time work. In Portugal, Ireland, Slovakia, Latvia and Cyprus, unemployment is around 15 percent.

Many of these are record highs. But unemployment was only a few percentage points lower this time last year.

Last week, Stratfor’sGeorge Friedman outlined what these numbers mean in real life. “Consider someone unemployed in his 20s, perhaps with a university degree,” he wrote. “The numbers mean that there is an excellent chance that he will never have the opportunity to pursue his chosen career and quite possibly will never get a job at the social level he anticipated” (emphasis added).

“Also remember that unemployment does not affect just one person,” he continues. “It affects the immediate family, parents and possibly other relatives. The effect is not only financial but also psychological. It creates a pall, a sense of failure and dread.”

Europe’s high unemployment means there are millions with no interest in supporting the current order.

The EU has come up with solutions that will keep Greece and Spain from going bankrupt over the next few months. But its solutions do nothing to solve the unemployment crises. Those unemployment figures aren’t going to change any time soon.

When the unemployed realize this, Europe will be gripped by social upheaval.

“The stoicism of the Spanish people so far has been impressive,” writes the Telegraph’s Ambrose Evans-Pritchard. “But willingness to put up with an intolerable state of affairs depends on belief that the pain is ultimately worthwhile.”

Once Spain’s 6 million unemployed realize that their stint on the dole is not a short step on the road to prosperity, then the rioting will start.

“Unemployment is a root of anti-state movements on the left and the right,” writes Friedman. “The extended and hopelessly unemployed have little to lose and think they have something to gain by destabilizing the state. It is hard to quantify what level of unemployment breeds that sort of unrest, but there is no doubt that Spain and Greece are in that zone and that others might be.”

Europe is heading for social chaos.

This, not the bond markets, is what will probably drive the euro crisis in 2013.

This social crisis will cause radical change in Europe.

“Social unrest and riots will eventually force Europeans to succumb to a strong united government of Europe, led ultimately not from Brussels, but from Berlin,” wrote Trumpet editor in chief Gerald Flurry in February 2009.

Northern Europe is not suffering. Germany’s unemployment rate is 5.4 percent—roughly a fifth of Spain’s.

Faced with mass unrest, some countries may quit the euro. But others will instead turn to Germany, willing to do almost anything to get German help to stop the rioting. This huge unemployment rate could be the hammer, anvil and furnace necessary to forge a newly integrated Europe.

European leaders already want political and financial union. But they’re talking about it in terms of the next five or ten years. Social unrest will force this unification to happen much faster. Some countries won’t be able to take the heat and will leave the kitchen. But the rest will forge closer together to form an undemocratic superpower.