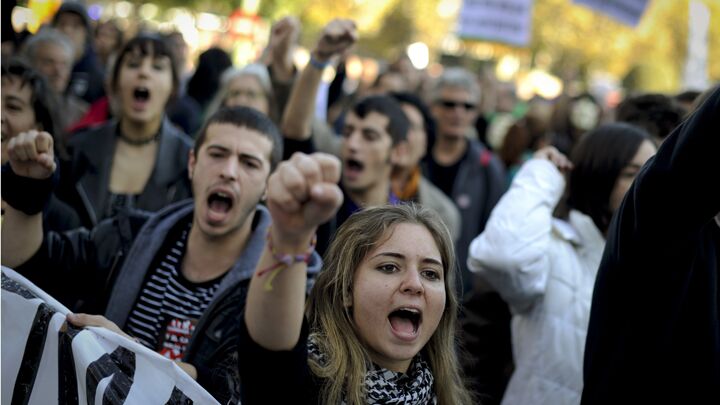 Unemployment is sky-high among young people. The pope sees this as an opportunity.

The most significant growth in the Roman Catholic religion—already apparent in this, the pope’s crusading “Year of Faith”—is the return of youth to Rome’s religion.

These two phenomena are powerfully connected.

High jobless rates among Europe’s youth are creating real problems. “[A]s Europe’s safety nets strain under the weight of austerity measures, more social and political unrest could arise,” Stratfor reported January 11. “Dramatically higher unemployment has been one of the main social consequences of the European crisis … . The crisis has had an even greater impact in the eurozone [compared to the EU as a whole], where unemployment reached a record 11.8 percent of the labor force in November 2012, up from 7.6 percent in the third quarter of 2007. All told, more than 26 million people are out of work in the European Union.”

This situation tears at the stability and order in European society.

The Yearnings of Youth

It is not unusual for people to turn to religion as a panacea for ills in times of trouble. Such is the case in Europe today. Amid the ongoing European crisis, the Vatican has seized the initiative to mount its “Year of Faith” crusade—taking advantage of the euro crisis to rebuild its number of adherents.

As is to be expected, since the social crisis centers on the youth demographic, it’s European youth who are responding in droves to the pope’s appeals. This is preparing Europe for the fulfillment of certain Bible prophecies for our time.

The traditional religion of Rome held sway in Europe for nearly two millennia. In the 20th century, liberal-socialist academics and the intelligentsia became the prime teachers of youth. However, the failure of communism left a gaping hole in their arguments. Since the late 20th century, up-and-coming youth have increasingly wandered as a largely soulless generation without a moral anchor. Add the current economic crisis to the mix, and the inevitable result is a yearning for something to give life meaning.

This vacuum has particular resonance in Europe. “These high unemployment rates jeopardize Europe’s stability,” Stratfor rightly observed. “At the national level, persistent unemployment is threatening the survival of the traditional political elites. The pervasiveness of high unemployment provides fertile ground for ideas and parties on both the right and the left that reject the establishment.”

Throughout his many writings, homilies and general appeals both to the faithful and to lapsed Catholics, Pope Benedict xvi is threading a message against the traditional establishment of the West—in particular the Anglo-Saxon model. He has called for a new world order—an order based on the Catholic Church’s own social chapter.

In his encyclical “Caritas in Veritate,” Benedict put forward Rome’s social chapter as the solution to global crisis. Many—especially European imperialist elites—are read this as the only way out of the globe’s endemic crises.

Such a vision has revolutionary appeal to a youth wandering in the darkness of a moral and social vacuum, seeking to embrace a reason for living. Hence the charge of the youth into mother Rome’s arms—only a few months into this Year of Faith.

Like his predecessor, John Paul ii, Pope Benedict particularly appeals to the youth of today. But there is a difference between the two—a profound difference.

Benedict has experienced the religious fervor, the strong social forces that can be released in youth when their young conscience is bestirred by a revolutionary vision put forward by a charismatic personality with a view of imposing a revolutionary new world order on the globe as a former member of the Hitler Youth.

He has experienced the unity of comradeship that is the natural outgrowth of a movement designed to meet the aspirations of young people yearning to make a difference in society—to establish a thousand-year rule of a new world order, a Holy Reich!

Benedict knows from experience that it’s a short walk from stirring a religious fervor in youth to launching a crusading spirit of military proportions. After all, as one of Hitler’s uniformed youth, he himself manned an anti-aircraft station, designed to shoot down Anglo-Saxon and Allied pilots during World War ii.

Later, he aided and abetted the escape of Nazi henchmen from Germany as part of the infamous Vatican ratlines movement.

Germany suffers from a unique problem that is increasingly impacting its social makeup: Its population is declining.

This is a dangerous position for Europe’s most economically powerful nation. No nation, even with Germany’s power and influence, can hold that power without a population and military force of sufficient size and technological prowess to protect its status.

Germany has countered the shortfall in its workforce by importing foreign labor in recent decades. But, as the Romans found out, a nation can ill afford to rely on hiring foreigners into its military force to secure its own national wealth. A nation’s military force must share the patriotism, the religious zeal—and in Germany’s case, the traditional imperialist vision—of its elites. In the European Union sense, any EU combined military force must share the same mindset—the mindset of its leading power, Germany.

What the pope’s Year of Faith is steadily delivering is a unified mindset—in particular within European youth—that will lead to an outcome that is prophesied in your Bible: “For God has put it into their hearts to fulfill His purpose, to be of one mind …” (Revelation 17:17; New King James Version).

With Germany increasingly committing to overseas military missions, with its huge wealth being increasingly looked upon with jealous eyes by many, and with the United States withdrawing from the role of global policeman, the Fatherland cannot escape the reality that it shortly must boost its military strength.

This it will do not only by increasing the extent of its own military forces, but also by adding to it the combined power of a limited number of European states whose leaders will possess the same Roman Catholic, Teutonic, crusading imperial mindset. Your Bible prophesies that this will comprise 10 national blocs all yielding up their power to Rome/Berlin: “The ten horns which you saw are ten kings who have received no kingdom as yet, but they receive authority for one hour as kings with the beast. These are of one mind, and they will give their power and authority to the beast” (verses 12-13; nkjv).

Crucial to any nation’s military force is that part of the population that is between the ages of 18 and 25 years. Most “grunts” fall into this age group. It is generally the fittest and most physically able group in any nation’s population.

This is precisely the age group most affected by today’s unemployment in Europe—and also the most susceptible to be influenced by religious ideology.

Roman Catholic EU elites know that it is a short haul from ideological commitment to taking action to fill the goals of that ideology. That is what underpinned the Crusades of old. It is what will provide the platform for one more final crusade by the Vatican and German elites—a “holy” Roman imperial crusade destined once more to head for Jerusalem!

The year 2013 is an important one in the effort of EU elites to further their imperial goals. Two crucial elections will see a confirmation of imperialist leadership in Europe’s two leading nations—Italy in February and Germany in September.

Add to that the impact of the pope’s crusading Year of Faith, and what will be a record-breaking rallying of Catholic youth on World Youth Day in Rio in July, and these will be looked back on as catalysts that propelled EU imperialist elites forward to their ultimate goal: the seventh resurrection of the Holy Roman Empire, with the prophesied havoc that this continually resurrecting old empire will once again wreak on an unsuspecting world.

Barely a century ago, a pathological megalomaniac sent German youth to the war front with the motto “God with us” stamped on their belt buckles. Just 25 years after that debacle, a demoniacal leader of great charisma sent the cream of German youth to death motivated by a religious fervor to conquer the world.

Are our memories so short?

Why do we remain so blind in the circumstances arising in Mitteleuropa so similar to the ones that ignited both those wars?

At heart, this is a spiritual phenomenon. What is undetected by commentators is the fact that it all being engineered by a higher source than man! Yet its reality, now so close to being consummated, was prophesied three millennia ago in your Bible in the book of Daniel. Its vision was added to in greater and more precise detail through the visions of the Apostle John 2,000 years ago in the book of Revelation.

The great hope that drives the Trumpet to continue to warn the world of this impending cataclysm in all that is playing out in Europe today is what lies beyond it. It is the fulfillment of a vision so breathtaking it requires the power of God’s own mind, His Spirit, to comprehend it.

Put yourself to the test. Request our free booklet Who or What Is the Prophetic Beast? and see if God will open your mind to understand these great prophecies and to use that understanding to prepare you for a part in their fulfillment.