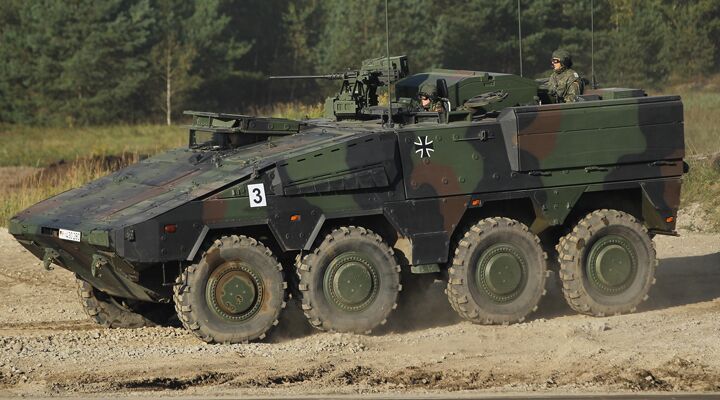 Germany is today far more strategically placed to initiate a sudden imperialist power grab than it ever was under Hitler back in 1939.

We have often commented on the infamous Nazi Red House document. It clearly documented the underground strategy that certain German military, political, industrial and banking elites would adopt to ensure that their nation would revive to mount another attempt at global dominance.

Now, 70 years on, that vision is about to be realized.

It’s been a most cleverly managed strategy, of which even many of Germany’s politicians have been largely ignorant as they have been manipulated by certain elites, now in a second generation but trained in the mindset of their old World War ii mentors, to use the European Union as a cloak for their imperialist intentions.

Both the German public and the general public have been victim of a masterful public relations campaign, aided and abetted by an Anglo-Saxon mass media terribly ignorant of true history, which has convinced the world at large of two great lies—that Germany is now a model, peaceful democratic nation, and that it is simply not capable of raising a powerful military force to be a threat, yet again, to world peace.

Yet German power can no longer be hidden. Even certain German politicians are beginning to express concerns at the scope of the nation’s weapons industry.

Peer Steinbrück, set to challenge Angela Merkel as German leader next year, criticized her center-right government on Saturday for letting arms exports surge ….The former finance minister, nominated to lead the Social Democrats (spd) into September’s election against Merkel, said it was a scandal that Germany has become the world’s third-largest arms exporter on her watch.Arms exports are a sensitive issue in Germany due to its Nazi past and the role arms makers such as Krupp played in stoking 19th- and 20th-century wars with exports to both sides.

Germany is the largest exporter of military armaments in Europe and third in the world behind the United States and Russia. The Arms Export Report 2011 released by the German government in November shockingly reveals Berlin’s geographic reach, international partnerships and foreign policy relating to its armaments industry.

Arabian Gulf states appear prominently in the report, underscoring German influence in arming these authoritarian countries as an iron arc in opposition against Iran. Trusted purchase partners such as the United Arab Emirates, Saudi Arabia, Kuwait, Qatar and Bahrain all have ordered sizable amounts of hardware.

The report revealed a total of €5.4 billion in export authorizations approved by Germany’s Federal Security Council, up from €4.8 billion in 2010. “German arms exports have nearly doubled since the end of the 1990s,” reports German-Foreign-Policy.com (Nov. 16, 2012).

However, once unreported sales are included, the picture becomes even more frightening.

As German-Foreign-Policy.com astutely notes, glaringly missing from the report are arms produced under German license in associated countries stretching from Europe to the Gulf states as well as tank sales to Saudi Arabia and Qatar—estimated at €10 billion—and the delivery of tanks and infantry vehicles to Indonesia, projected at €6 billion. Adding these line items to the reported €5.4 billion, the 2011 report could more accurately total €21.4 billion!

“Last October, in her speech to some 250 civilian and military leaders at this year’s Bundeswehr conference in Strausberg (Brandenburg), the German chancellor explained the booming arms exports’ political function. ‘All available instruments’ must be networked for Berlin’s global policy, Merkel said: ‘economic policy, development policy, diplomatic, police, and military measures must proceed hand in hand.’ Potentials of allies must also be used—not only those of nato and the EU allies, but also those of ‘other actors,’ who should be ‘encouraged’ to enhance their engagement for ‘security and liberty.’ And she promised support: ‘Whoever feels committed to maintaining peace’—like Germany—‘but cannot play an active role throughout the world,’ should now be ‘called upon to help trustworthy partners’ so that they can ‘assume corresponding responsibilities.’ This includes support in military training and the supply of the necessary military hardware” (ibid).

What is clear from the report is the impact of the scope of the actual and potential hostilities in the Mideast and Asia upon German arms exports, which is reflected in the 2011 report and only set to be exceeded in future reports.

It’s hard to conceive that Germany, shattered amid rubble after Allied invasion in World War ii, exports more military hardware than any other European country today. This fact alone has foreboding historical overtones. Under the perceived “dove”-like administration of Angela Merkel’s coalition government, the results of this report, and the sales that have been omitted, reveal a “hawkish” military industrial powerhouse exporting hardware unchecked across Europe, the Mideast, Africa and Asia.

The U.S., Britain, the United Nations and nato have forgotten the words of Franklin Roosevelt and Winston Churchill at the end of World War ii in their joint declaration: “It is our inflexible purpose to destroy German militarism and Nazism and to ensure that Germany will never again be able to disturb the peace of the world.”

They didn’t stop with that, but continued, “We are determined to disarm and disband all German armed forces, break up for all time the German General Staff that has repeatedly contrived the resurgence of German militarism; remove or destroy all German military equipment; eliminate or control all German industry that could be used for military production.”

“It is not our purpose to destroy the people of Germany,” wrote the two world leaders, “but only when Nazism and militarism have been extirpated will there be hope for a decent life for Germans and a place for them in the community of nations.”

What few point to in this whole scenario is the cold, hard reality that Germany’s armaments industry could so easily turn its production to self-consumption of its wares, rather than exports. The last time that occurred it spelled massive disaster for the world.

This time Germany already has its allies consuming its military hardware, dependent on it for spare and replacement parts, for upgrades and for the training of their military personnel in the usage of its weaponry. It’s one small step from there for Germany to arm itself to the teeth, thus becoming not only the world’s third-largest producer of military hardware, but the third-largest user of the same, replete with imperial alliances with many of its existing foreign customers, who are in turn armed with German weaponry.

One other fact seems to escape most observers of the German scene today.

Hitler launched a world war having occupied only the periphery around his nation—the Rhineland, the Sudetenland, Austria and Czechoslovakia.

Since Germany, in concert with the Vatican, stimulated the Balkan wars of the 1990s—resulting in the first aggressive post-World War ii military action by that nation—it has progressively mounted military missions in 13 separate foreign theaters (see map).

The reality is that today Germany is far more strategically placed to initiate sudden imperialist aggression than Hitler ever was back in 1939!

All it lacks is the type of charismatic, imperialist leadership to initiate it!

Germany may well continue for a short while to appear the dove in European foreign policy under Mutti Merkel’s waning motherly leadership amid deepening continental and world crisis.

But not for long.

The postwar view that Germans have long held of themselves is changing, as is the view of their European neighbors, and the mood is turning ugly (“The Ugly German Rears Its Head,” Spiegel Online, Dec. 13, 2012). It’s under such conditions that populist leaders tend to rise in Germany.

The ancient Prophet Daniel wrote in chapter 8 of a powerful end-time leader’s imminent arrival amid today’s crisis. He is described as fierce in physical appearance and devious in dark political lobbying. He appears one way to Germans and Europe’s citizens, only, in reality, to be just the opposite, a crafty wolf in sheep’s clothing, leaving devastation in his wake via a deceptively-crafted policy of peacekeeping that hides the true nature of a Holy Roman imperial motive.

Trumpet editor in chief Gerald Flurry has long warned readers, “The Daniel 8 man is going to change the German landscape—economically, politically and militarily. Germany needs a man for emergencies. What we see developing now is just such an emergency, and Germany is about to bring that man to power. This is what’s just ahead of us!”

Again, we remind you as Herbert W. Armstrong did beginning in 1934, a world dictator is about to appear! A strong man in Europe is about to arise! Then watch for the unleashing of the powerful military potential that the German armaments industry has steadily built to such a dominant level.