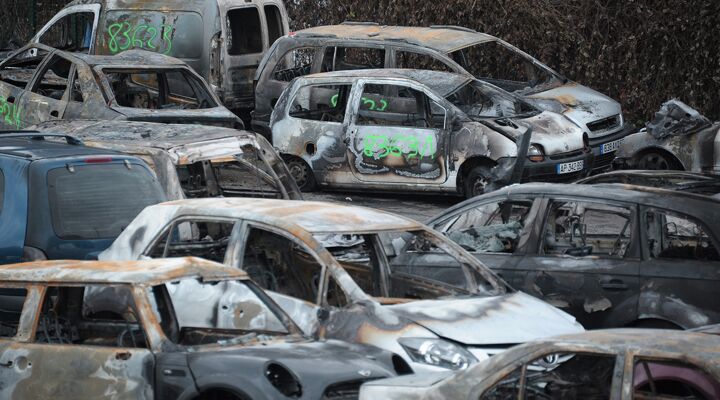 Fireworks are the most traditional way to celebrate the New Year. But there are other traditions. In Japan, Buddhist monks hit a gong 108 times. In Spain, people eat 12 grapes. And in certain French cities, they burn cars.

That’s right. The New Year’s Eve car burning has become so regular it is almost a tradition. Every year, youths run riot. This time, 1,193 cars were burned.

Naturally, the story has gathered a lot of media attention. But all the mainstream reports on the subject are strangely vague about one thing—who is doing the burning. Every student of journalism learns that his or her article should answer the “five Ws”: who, what, when, where and why (and sometimes “how”). Who is invariably listed first.

Why have so many journalists suddenly forgotten their basic training?

It’s tempting to look for a conspiracy, but the answer is more likely political correctness combined with laziness (or tight deadlines). Perhaps the French media are keeping quiet for fear that publishing the truth will pour oil on the flames.

Who are these rioting youths? The mainstream reports contain the hints necessary to put it all together.

“The practice reportedly began in earnest among youths—often in poor neighborhoods—in the 1990s in the region around Strasbourg in eastern France,” writes the Associated Press. Strasbourg is the home of France’s biggest mosque and a large population of Muslims.

Car burning “also became a voice of protest during the fiery unrest by despairing youths from housing projects that swept France in the fall of 2005,” continues AP. “At the time, police counted 8,810 vehicles burned in less than three weeks.

“Yet even then, cars were not burned in big cities like Paris, and that remained the case this New Year’s Eve. [Interior Minister Manuel] Valls said the Paris suburban region of Seine-Saint-Denis, where the 2005 unrest started, led the nation for torched cars, followed by two eastern regions around Strasbourg.”

Who rioted in 2005? At the time, the New York Times wrote that “a majority of the youths committing the acts are Muslim, and of African or North African origin.” Seine-Saint-Denis is heavily Muslim.

Even the Iranian state-owned Press tv notes the connection between car burning and Muslim districts. “While not a single car was burned in Paris, its suburban region of Seine Saint Denis led the nation in torchings,” it wrote. “Heavily Muslim and just as heavily impoverished, the area has 75 percent of the population of Paris, but Paris is protected by five times as many police officers.”

Whether you believe that Muslims are rioting (à la the right-wing blogosphere) or that French police refuse to protect France’s poor Muslim districts (à la Press tv), it’s clear France has a problem with Islam.

And that’s becoming obvious to the French too. They can hardly escape it after last year’s shocking attacks on Jews.

“In August, the French government announced a plan to boost policing in 15 of the most crime-ridden parts of France, in an effort to reassert state control over the country’s so-called ‘no go’ zones (Muslim-dominated neighborhoods that are largely off limits to non-Muslims),” it wrote.

These zones “include heavily Muslim parts of Paris, Marseilles, Strasbourg, Lille and Amiens,” according to the report—in other words, the areas where people burn cars.

But the Gatestone Institute’s report notes that French attitudes to Islam are changing. “Opinion surveys show that to voters in France … Islam and the question of Muslim immigration have emerged in 2012 as a top-ranked public concern,” it writes. “The French, it seems, are increasingly worried about the establishment of a parallel Muslim society there.”

The government’s efforts, however, “were halting and half-hearted,” the report said.

A survey published in October last year found that 60 percent believe Islam has become “too visible and influential.” Forty-three percent said the presence of Muslim immigrants is a threat to French national identity, compared to 17 percent who said it enriches society. Sixty-three percent oppose Muslim women wearing veils or Islamic headscarves in public. Only 18 percent support the building of new mosques.

“Our poll shows a further hardening in French people’s opinions,” said the head of the French Institute of Public Opinion’s polling department, Jerome Fourquet. “In recent years, there has not been a week when Islam has not been in the heart of the news for social reasons: the veil, halal food, dramatic news like terrorist attacks or geopolitical reasons.”

The most headline-grabbing resistance to radical Islam came from the satirical magazine Charlie Hebdo. Islamists firebombed its offices in November 2011 after it published cartoons of Mohammed. Its response? This week it published Mohammed’s biography in cartoon form.

The politics haven’t changed to reflect this. But the people have.

Whether you blame the Muslim immigrants, or French society, it’s clear that France is bitterly divided. Animosity and even hatred are building on both sides.

Many conservatives worry that Islam will overrun Europe. But this belief neglects history. When has Europe not reacted to this kind of threat? The norm is to overreact—or invent threats to react to.

European civilization will not lay down and die. Already the French people are turning on Islam. Will 2013 be the year they push their politicians to do the same?

The push will come sooner or later. The Bible prophesies that Europe will take the lead against radical Islam. For more information on this, see our article “Catholic Europe vs. Islamic Hordes: Round 2.”