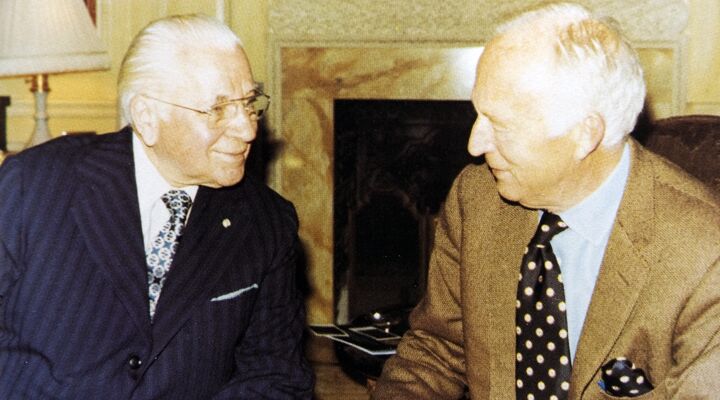 At midday on Sunday, May 5, 1985, Herbert W. Armstrong arrived in Brussels, Belgium, for meetings with publication staff of the French-language version of the mass-circulation Plain Truth magazine, Pure Verite.

Thereafter, he drove to Chateau d’Argenteuil for a special luncheon with Princess Lilian, the widow of his longtime friend King Leopold iii, whom he had first met in 1968 seeking use of the king’s extensive color photograph collection in editions of the Plain Truth.

Seventeen years later, after collective global humanitarian endeavors between Ambassador International Cultural Foundation, which Mr. Armstrong had founded, and the King Leopold iii Foundation, this friendship had built into a powerful partnership in the pursuit of peace by the king and unofficial ambassador.

Upon arrival, Mr. Armstrong, who was accompanied by Colonel Von Cauberg, was greeted near a sitting room by the princess and her youngest daughter, Esmeralda. For the next half hour they conversed, before adjourning to the dining room.

During lunch, Princess Lilian complimented the close friend of her husband, who at 92 years of age maintained a strenuous travel schedule. Largely, the topic of conversation centered upon Outrageous Fortune, the new book authored by Roger Keyes. Relying upon documents obtained from the Second World War, the book exonerated King Leopold’s decision to stay with his troops as their chief commander and surrender to the invading troops on May 28, 1940, and as such save approximately half a million of his countrymen from slave labor in Germany.

The king was repudiated by Belgian government officials, who by the time of the invasion had fled to the safety of Britain. King Leopold iii was held in Belgium until 1944 as a prisoner by the occupying Nazis, after which he was transferred to Austria until hostilities ceased and he was freed to return to Brussels.

However, controversy at home led him to renounce the throne on Aug. 11, 1950. “The king did not speak in his own defense, but instead suffered with dignity the politically expedient abuse heaped on him by others in England, France and Belgium,” wrote Mr. Armstrong’s personal aide in the May 13, 1985, edition of the Worldwide News.

Reflections of his father, King Albert, impacted Leopold. In the wake of the savagery of World War i, Albert toured the battlefield of his tattered realm. In dismay at the images of waste and carnage, he directed an iron shell casing from these grounds cast into four watch cases. His desire was to award each watch to the person who had made the most notable efforts toward peace.

One was given to the head of the Allied Supreme Command, Field Marshal Ferdinand Foch. Another was given to Commander in Chief of the Third Expeditionary Force Gen. John J. Pershing. The third was awarded to France’s Premier Georges Clemenceau in recognition of his wartime leadership. During his lifetime, Albert found no one of his estimation worthy of the last remaining prize. After his death, the fourth watch was passed on to his son King Leopold iii.

In 1970 the king presented the last of these special watches to the internationally recognized unofficial ambassador for world peace. In acceptance, Mr. Armstrong stated, “I feel it was the highest honor the king could have paid anyone. Whatever contribution to world peace I may be making is not through war, but through education, teaching millions worldwide the way to peace!”

At the conclusion of lunch the ensemble repaired to the relaxation of the royal library. Surprisingly, the princess then excused herself for a few minutes, leaving the group to reflect upon the meaningful mealtime conversation. When she returned, Mr. Armstrong made a point of telling her that he felt the king was “a courageous man and a dear and affectionate friend,” adding that an article featuring him would appear in a future edition of the Plain Truth.

In response and to Mr. Armstrong’s amazement, Lilian reached into her pocket and pulled out a small box, opening it to expose a beautiful medal covered in white enamel, featuring in its center a gold portrait of Leopold.

Then, with the small assembly gathered, she officially presented to this special friend of Belgium and its regal house, the Cross of the Veterans of King Leopold iii.

“She said that her husband intended to confer this decoration to him earlier because of his friendship to the king and the Belgian people, but he died before he could present it,” wrote the Worldwide News. Thereafter, she presented Mr. Armstrong with a signed copy of Outrageous Fortune, adding her desire to accept his previous invitation for her to tour the Ambassador College campus in Pasadena, California.

Belgian and all readers of our French-language edition of our magazine, La Trompette Philadelphienne—Été, need to request their free copy of He Was Right, Il avait raison, for a recounting of over 50 years of prophetically accurate fulfillment of biblical prophecies impacting Belgium. In 1934, Mr. Armstrong declared, via the Plain Truth, that one last time the Continent would be in the grip of German dominance amid its pursuit of regional and global ambitions as the final resurrection of the beastly medieval church-state combine of the Holy Roman Empire.