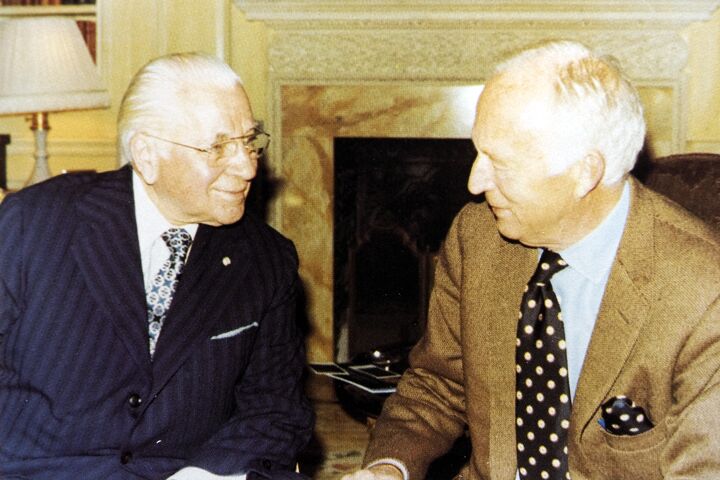 The real solution to Belgium’s government crisis is embedded in a friendship between one of their own kings and an elderly ambassador for world peace.

Amid the current turmoil in the European Union, one of its founding member nations, Belgium—the nation that houses the headquarters of the EU and nato—has been without an effective government for well over a year.

Belgian politics has suffered from ongoing chronic breakdown, with almost 430 days passing since its last elections without any agreement between the parties on the settling of differences between the warring Flemish and Walloon (French-speaking) political representatives. Talks are set to resume in a week’s time after being suspended while politicians take a vacation.

Last month, Belgium’s King Albert ii delivered a speech in accordance with tradition on Belgium’s national day, July 20. It was broadcast nationwide to Beligium’s population of nearly 11 million citizens. The message from the 77-year-old king revealed royal impatience with Belgian politicians and sounded a warning that the country’s crisis of confidence, governance and leadership could not continue as the status quo without drastically damaging national unity.

In his speech, the king pointed to the need for political stability in Belgium especially as Europe is embroiled in the current crisis of the eurozone countries. He noted that that particular crisis had necessitated a special eurozone summit in Brussels on Belgium’s celebrated National Day. The king clearly showed his frustration at the failure of negotiations between the divided political parties in their efforts to establish a workable Belgian government.

Albert ii was born in Brussels at the Château du Stuyvenberg on June 6, 1934. Assuming the title “Prince of Liège” at birth, he is the son of King Leopold iii and Queen Astrid, born princess of Sweden, and the grandson of King Albert i and his wife Queen Elisabeth.

Following the death of his brother, King Baudouin, Prince Albert took the royal oath before the United Chambers on Aug. 9, 1993, and became the sixth king of the Belgians. As a constitutional monarch, he rules without governing, although his role is of vital importance in influencing the government of the day. The king is the royal guardian of the country’s unity and independence.

Belgium is a federal state divided into three regions: Dutch-speaking Flanders in the north, francophone Wallonia in the south, and Brussels, the bilingual capital, where French and Dutch share official status. There is also a small German-speaking minority of some 70,000 in the eastern part of the country.

In the ongoing painstaking struggle to form a government of the Belgian people, politicians and monarchy would do well to remember a royal friendship of an unofficial ambassador for peace, Herbert W. Armstrong, and its own King Leopold iii. That friendship extended from 1968 to the time of Leopold’s death in 1983. It was based on a mutually shared outgoing concern for humankind and manifested in efforts directed toward increasing understanding of the need for the peaceful coexistence of all nations.

To that mutual interest, Herbert Armstrong brought an added dimension: his work publicizing the need for the effective governance of man over man undergirded by a reverence for and reliance upon his all-powerful invisible Creator. So prized was the example of this unofficial ambassador for peace that King Leopold bestowed one of Belgian royalty’s greatest honors upon him—a valued item created out of an artifact from the Great War.

Following the armistice that brought an end to the hostilities of World War i, King Albert i of Belgium visited the battlefield of his shattered kingdom. Appalled by the scenes of ruin and slaughter, he ordered an iron shell casing on the battlefield to be cast into four watch cases. He intended to present the watches to the four individuals who had made the most significant contribution to peace.

One watch went to Field Marshal Ferdinand Foch, head of the Allied Supreme Command. Another was given to Gen. John J. Pershing, commander in chief of the Third Expeditionary Force. The third watch was presented to French Premier Georges Clemenceau for his inspiring leadership in the dark days of war. King Albert did not find anyone qualified to receive the fourth watch. After he died, the watch was passed on to his son King Leopold iii.

In 1970, half a century after the end of World War i, King Leopold iii presented the fourth watch to that unofficial ambassador for peace, Herbert W. Armstrong. In accepting it, Mr. Armstrong said, “I feel it was the highest honor the king could have paid anyone. Whatever contribution to world peace I may be making is not through war, but through education teaching millions worldwide the way to peace!”

The relationship between these two men of mutual understanding and admiration resulted in joint scientific expeditions in association with the Leopold iii Foundation for the Exploration and Conservation of Nature. There followed further visits by Herbert Armstrong to the king involving discussions on themes of mutual interest, exchanges of gifts and also tours of the Belgian Palace. In turn, the king visited Ambassador College in Pasadena, California. He was so impressed by the campus that he visited it often.

As recounted by Remy in his book The Eighteenth Day, during World War ii, Belgium’s young King Leopold iii revealed his passion for enhancing understanding of effective national governance. “[I]n the presence of the burgomaster of Brussels, the director of the National Bank and the head of the Christian Trade unions, Leopold stated categorically that ‘the government’s methods are bad.’ After reminding them of the important responsibilities that the government must fulfill in its role as trustee and servant of the nation he concluded, ‘The most important reform is to change the mentality of the men in power.’” That kingly advice uttered during the dark days of war is critically relevant to Belgians today in their painful search for stability of governance.

Are there still minds in Belgium that yet remember that kingly witness? Do any remember their former King Leopold iii, the friend of Herbert Armstrong who remarked that the day he spent on the Ambassador campus was the happiest of his life?

If there are, as troubles impact their nation on their increasingly destabilized continent, will they recall that white-haired patriarch who came among them as a friend of their king, witnessing of the coming Kingdom of God? (Read Herbert W. Armstrong’s autobiography to learn more about this ambassador for world peace.)

As King Albert ii delivered his televised speech to a leaderless nation this past July 20, he would have done well to remember his father’s nationwide call to valor as commander of the armed forces delivered on May 10, 1940: “People of Belgium! Despite the solemn pledges made to the world, the German Empire, for the second time in a quarter of a century, has attacked Belgium, which has always remained loyal and neutral. By nature a nation of peace, we have done everything possible to avoid war, but if made to choose between sacrifice and dishonor, the Belgian will no more hesitate today than he did in 1914.”

To resolve its present internal crisis, today’s divided Belgium sorely needs the quality of leaders such as King Albert i, who fought by the side of his troops in the Great War as king of a nation united against a common enemy. They ought to remember the courage of that king’s son, Leopold iii, who fought in the trenches against that enemy as a 14-year-old. For, while Belgium remains divided internally, it is completely oblivious to that same enemy right now consolidating its imperial hold on Europe.

Just as it has with the Balkan Peninsula, with Greece, with Ireland and Portugal and is shortly to do the same with Cyprus, Germany is about to devour a divided and economically challenged Belgium in one gulp.

For over 21 years, our editor in chief, Gerald Flurry, has labored to continue the honored legacy of Herbert Armstrong warning the world of the seventh and final resurrection of the Holy Roman Empire. As that northern empire even now develops before our eyes, Mr. Armstrong’s legacy as an ambassador for world peace is continued through the print and online magazine the Trumpet, via the Key of David television program, the educational institutions Herbert W. Armstrong College and Imperial Academy elementary school and also culturally through the concert series sponsored by the Armstrong International Cultural Foundation held at the breathtaking new Armstrong Auditorium.

Together these initiatives are a continuing witness to that which King Leopold iii of Belgium acknowledged in Herbert Armstrong, his example as an unofficial ambassador for world peace as he sounded the advance news of the coming leadership and the government that will quell all national division and finally establish peace on Earth for all mankind (Matthew 24:14, 21-22).