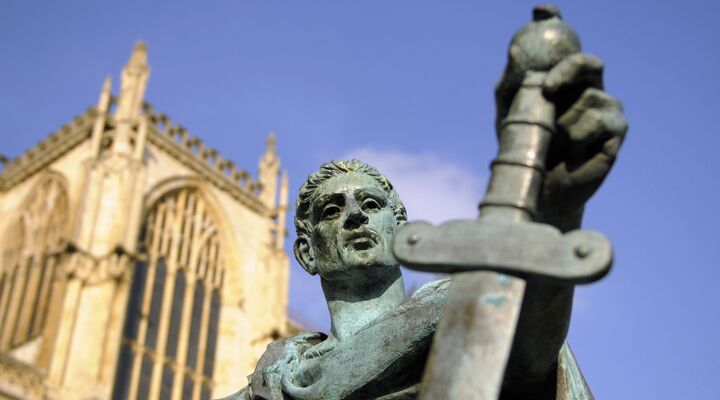 On Nov. 27, 1982, Herbert Armstrong spoke in the famed Ambassador Auditorium in Pasadena, California, declaring to the audience a “United States of Europe is coming.”

Revelation 13 and 17 reveal this prophesied fact of the present. Today, Europe is undisputedly dominated by one nation—Germany. Through economic power and influence it has succeeded in leading the subjugation of such countries as Greece, Spain and Italy, as noted by the ancient Prophet Daniel in chapter 8 and verse 9.

However, Germany’s guidance of Europe’s present united states has been controlled, managed and carefully permitted by the overseer of the 27 nations’ treasury, the European Central Bank (ecb), in consort with the leader of the European Council and the European Parliament, along with the top leaders of Italy and Spain.

Is there a connection? If so, then what? This website has drawn repeated attention to a cadre of power players in Europe who have been Jesuit trained and dubbed “God’s Marines.” Who are they?

Mario Draghi presides over the ecb, a position more powerful than head of the U.S. Federal Reserve. Herman Van Rompuy is president of the European Council. José Manuel Barroso is not Jesuit trained, but as a knight of Malta has shown himself a sympathizer and supporter of the Holy Roman-trained “Marines.” Mario Monti, prime minister of Italy, was called upon in an unelected capacity to save his country’s economy. Finally, Spanish Prime Minister Mariano Rajoy was elected to preserve Europe’s most Catholic country from fiscal inquisition.

Revelation 17:1-5 declare a woman riding the great beast. She is named as a Babylonian mystery religion, universal in scope, power and influence, in control of her daughters.

“The last time I was in Jerusalem the patriarch of the Eastern Church at Jerusalem came to see me in my hotel suite,” the unofficial ambassador recounted in his 1982 address. “And he gave me what he considered the highest prize he could give, which was the cross of Constantine—Constantine the Great—which dates back to a.d. 325, 325 years after Christ.”

Constantine ruled his empire from and was named after the city of Constantinople, and history credits him with calling the Nicene Council at which he veritably dictated doctrine of the Catholic Church.

“Well this cross, it is quite a good sized cross, it was hanging on my … I think it is supposed to hang around your neck and hang down in front, and it would really show. It was of gold and quite decorative solid gold. And I was the 129th person to receive that award since a.d 325. So they consider it a very high honor because very few have ever received it.”

The Orthodox Church patriarch who gave Mr. Armstrong this honor was born Damianos G. Karivalis in Greece on Aug. 14, 1923. In 1944 he was renamed Diodoros after becoming a monk. By 1947 he was a priest, then in 1962 was appointed an archbishop. He served as Patriarchal Exarch in Jordan’s capital, Amman. Then in 1981, a year before awarding Mr. Armstrong the Cross of Constantine, the Orthodox Church of Jerusalem named Diodoros patriarch. He remained in the post 19 years until his death on Dec. 20, 2000.

In the course of their meeting, which took place at Mr. Armstrong’s hotel suite, Mr. Armstrong asked Diodoros, “Do you think that there will be an ecumenical movement so that the Eastern and the Roman Church will go together and be rejoined?” The patriarch responded, “We are praying for it.”

This historic meeting in Jerusalem made clear to Mr. Armstrong the resolution between the Catholic and Eastern Orthodox churches on three key doctrinal sticking points.

Secondly, on the doctrine of supremacy over believers, agreement was made that the papal office would be chief while the patriarch’s position would be secondary.

At the time, this came as news to Mr. Armstrong—that the pope would be, as he noted, “top of the heap, just as the Bible says exactly,” as leader of this powerful combine of churches (Revelation 13:1-2), over many waters (Revelation 17:15), composed of many nationalities speaking diverse languages, which he stated on Nov. 17, 1982, was “Europe.”

Thirdly, he cited that the only remaining sticking point to be resolved was that of the bishop of Rome’s infallibility. As a result of his private meeting with Diodoros, Mr. Armstrong said, “I think that Rome will now make the concession that they will also listen to the top Greek officials before he makes any such pronouncements. But that won’t be much of a give and take for him; and I am quite sure that’ll be done, and I think it will be done very quickly” (ibid).

Today, the Eastern Orthodox Church believes in the “impeccability” of the pope. This translates as belief that the pope cannot sin.

Bible prophecy bespeaks of a powerful “woman” riding and guiding a “beast” in this end time, a final resurrection of the medieval Holy Roman Empire. “Here is pictured a woman,” Mr. Armstrong wrote in his compelling booklet Who or What Is the Prophetic Beast? “In 2 Corinthians 11:2, Ephesians 5:22-27 and elsewhere, we learn that ‘woman’ is a symbol for church. This woman is a fallen woman—an apostate church—pictured as ruling over many nations (Revelation 17:1, 15). In verse 3, this false church is pictured sitting on a beast ‘having seven heads and ten horns.’”

Request your free copy of Who or What Is the Prophetic Beast? to understand more about this critical prophecy unfolding now in Europe, soon to directly impact your own personal life!