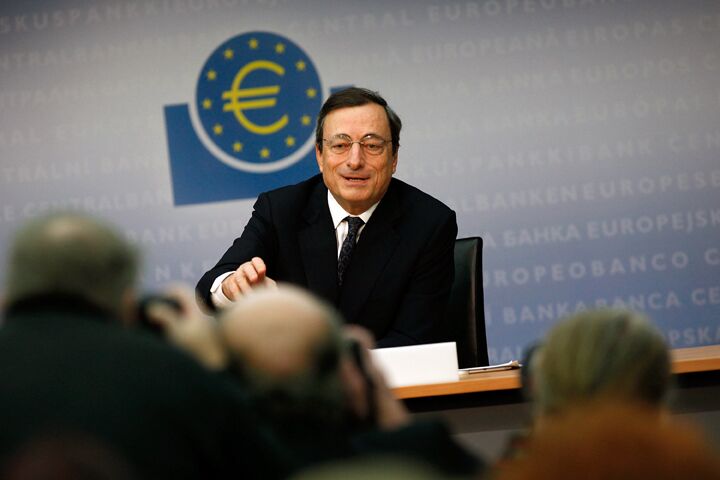 Rome is about to exert powerful influence on Europe once again.

“Eurocrisis contagion out of control, all eyes on Super Mario—Mario, fire your silver bullet!”

That was one of the comments made by a cnbc commentator following the close at last Friday’s New York Stock Exchange.

During this week’s Monday afternoon coverage of the world’s stock markets by cnbc, all eyes were still centered on Europe. Commentator Brian Sullivan made what appeared to be a tongue-in-cheek comment indicating that “all you have to know to understand Europe is that it has an Italian central banker and a German pope.” Well, he may not be far off the mark.

The whole world looks now to the German pope’s man presiding over the European Central Bank, Italian Mario Draghi, to come up with a rescue plan for the imploding global financial system.

But, as of Monday, Mario still held his fire. Result? The markets tanked on Monday. The blame? Escalating euro crisis!

What’s really going on behind the scenes in Europe? Why is no one yet overtly moving to “solve” this rapidly worsening financial chaos?

Who’s really pulling the European Central Bank’s strings while the whole world looks to its president Mario Draghi for an answer?

The words of Herbert Armstrong ring in the ears of the enlightened: “I believe that some event is going to happen suddenly, just like out of a blue sky, that is going to shock the whole world, and is going to cause the nations in Europe to realize they must unite! … I think I can see what may be the very event that is going to trigger it, and that is the economic situation in the world” (public address, July 7, 1984).

Mr. Armstrong pointed to future massive bank failures as causing “chaos, economic chaos all over the world for many nations and millions and billions of people.”

Given today’s chaotic global financial and economic scenario, an increasing number of market commentators point to such an event as being inevitable.

Just how close could that event be? And who has the answer to it?

We posit that there is one high-level group of global elites who remain unperturbed by the current global financial crisis—those who triggered it from its beginning! For they simply await the opportunity to impose their imperial solution on it.

In one of the clearest-eyed observations of the current scenario, Magellan Financial Group’s Hamish Douglass, responding to an Australian Broadcasting Commission’s interviewer, declared: “It’s our judgment that the Germans are actually fully in control of this situation …” (abc News, November 20).

Knowing the history, that has been our judgment all along. But one has to know of the strategy and its divinely revealed outcome to fully understand just what’s truly behind it all and where it is leading.

Yet while Hamish Douglass does see the very obvious power of Germany in all this, he apparently does not see the spiritual influence behind it. That spiritual influence was partially revealed last week in a brief allusion made to it by the European Council president, Herman van Rompuy, in a speech in honor of Prof. Paul de Grauwe: “Welcome [to] the club! Today, Mario Draghi, Mario Monti and myself are all three alumni from the Jesuits. Back to basics” (Office of the European Council President, November 17). Those basics are “Holy” Roman basics!

Van Rompuy then alluded to his two Jesuit-educated technocrat compatriots as sharing with him “an idea of a humane market economy, an area where I have always dwelled.” What they all share is the global economic vision of Rome encapsulated in Pope Benedict’s 2009 encyclical, “Caritas in Veritate.”

This hat trick of Jesuit-trained technocrats is but the tip of the iceberg. Yet another Jesuit-educated leader, Spain’s new prime minister-elect, Mariano Rajoy, will soon be added to that list.

As an aside, what is it about the names of three of these, two Marios and a Mariano? That name, be it the Italian or Spanish rendition, is derived from Mars, the pagan god of war! Add to that the meaning of Van Rompuy’s first name, the Germanic Herman, with it’s similar meaning of “war man,” and you have to ask, is this all coincidence? Perhaps so, but it’s interesting to note in the light of the prophecy contained in Revelation 12:17.

We see a team of Jesuit-trained papists emerging at senior level in the European Union, all possessing Rome’s vision of the world. Is this not extremely strong evidence that the prophesied woman of Revelation 17 is speedily mounting her prophesied “beast”?

Soon, very soon, the world will wake up to the reality that the dream of the Holy Roman elites did not die in 1945. Over time it was carefully resurrected to spread its controlling tentacles around the whole postwar European unification project and bide its time till the aristocratic elites of Rome and Berlin were ready to reveal their true hand.

That time is just about ripe.

We have been in the midst of financial crisis since 2008. The massive global financial catastrophe prophesied by Herbert Armstrong that will finally see the Holy Roman imperial phoenix arisen from the ashes of World War ii is almost completely upon us.

When it happens, let the gainsayers eat their words. Herbert Armstrong will be vindicated. The Eternal Creator of man will have His way. The enlightened will be there to rejoice at their Savior’s return to bury the Holy Roman dream forever and join with Him in raising up His glorious Kingdom of peace on Earth—forever!