From the book The Last Hour
By Gerald Flurry

I believe the expression “from the beginning” is the very deepest in the Bible! Only a tiny few people on planet Earth understand this vision. Only people who are strongly dedicated to God can hope to have this understanding revealed to them!

Now let’s go back and look at this expression more closely.

“That which was from the beginning, which we have heard, which we have seen with our eyes, which we have looked upon, and our hands have handled, of the Word of life” (1 John 1:1). Word is capitalized. It refers to the God who became Christ. To better understand who this Word was, we need to look elsewhere.

This same Apostle John wrote the Gospel message that bears his name. “In the beginning was the Word, and the Word was with God, and the Word was God” (John 1:1). He is giving us God’s perspective—the big overview. This is the most inspiring vision we can have. Please keep that in mind.

Thayer’s Lexicon defines Word this way: “The doctrine which he [the Father] commanded to be delivered” and the “thing spoken”—in other words, the message from the God Family.

Let me repeat: John was the only New Testament writer to designate Christ as the Word! He does so only in four verses: John 1:1, 14; 1 John 1:1; Revelation 19:13. Let’s look at the last verse. “And he was clothed with a vesture dipped in blood: and his name is called The Word of God” (Revelation 19:13). This is the Word who created all things and was eternal before the angels or the universe were created. This great Being’s vesture was dipped in blood. He became a man and shed His blood for lowly men—for you!

Remember the price that was paid for your sins! This is what you need to remember “from the beginning”—you need to understand deeply who died for you! This understanding needs the deepest kind of emphasis in your mind.

John is reminding us and himself who this Jesus Christ really was—who He was from the beginning. This is the Being the apostles had seen with their eyes and “looked upon” (gazed upon is a better translation), and their hands had handled. This was not just a man sent from God. This was one of the two great members of the God Family who are eternal. John wanted to make certain he never forgot the whole wonderful story—from the beginning.

If you listen to John, he will keep you grounded in God’s dazzling inspiration! If you grasp this message from the beginning, it takes your breath away!

Today, if we go back to the time of Mr. Armstrong, we see that he restored all things (Matthew 17:10-11). That was the beginning of the end-time Philadelphians. But Mr. Armstrong taught us what happened from the beginning. He repeatedly referred to John 1:1 as the beginning, not Genesis 1:1. The pcg does the same today.

Why is it so important that we have this view? Because it is God’s view! The created must get the Creator’s view—if they themselves are to become creators! If we are to be born into God’s Family, we must have God’s perspective. Then the ambition of Diotrephes becomes spiritual madness! Nothing even remotely compares to what God is offering. However, it is not easy to use God’s Holy Spirit to search out the deep things. What a mind-boggling reward God has for those who understand.

If people were listening to John, they would have thought he was about to mention Christ. But instead, he discussed the Word. John’s goal was to show us eternal life—manifested in the flesh! The Word lived eternally with God and manifested Himself in the flesh. John was trying to make this mind-splitting message real! Many were losing this understanding. Otherwise, they would never have followed Diotrephes!

What was Lucifer’s major sin? “He that committeth sin is of the devil; for the devil sinneth from the beginning. For this purpose the Son of God was manifested, that he might destroy the works of the devil” (1 John 3:8).

That means you must know that he was once a great cherub who helped to cover God’s throne. He was created for that responsibility. He was educated in how to rule God’s way—with God’s LOVING government. No angel should have known better how to rule! He must have sat at God’s feet for many years—perhaps millions. Then Lucifer was sent to Earth to apply what he had learned.

We urgently need to understand this history from the beginning—or we will be wretched and hopeless failures.

Concerning the serious wcg problems in the 1970s, Mr. Armstrong often spoke of Satan’s attacks on God’s Church. He knew who the real enemy was. Only the pcg thinks that way today. That is not a boast—it’s reality!

“Thou wast perfect in thy ways from the day that thou wast created, till iniquity was found in thee” (Ezekiel 28:15). What iniquity? Satan, like Diotrephes, wanted the preeminence. He wanted to govern his way—not God’s way.

“Thine heart was lifted up because of thy beauty, thou hast corrupted thy wisdom by reason of thy brightness: I will cast thee to the ground, I will lay thee before kings, that they may behold thee” (verse 17). He was very vain and corrupt. He thought he could rule the universe without God’s government!

Why did the Apostle John discuss Satan? Because it was Satan who got to Diotrephes when he wanted the preeminence.

It is also Satan who gets to the Laodicean leaders today. Satan leads the Laodicean ministers to think they can rule with a new government—this is really rank rebellion! Satan has already demonstrated that it will not work—from the beginning.

When Lucifer and the angels were created, God taught them about His government and law. The same law that had kept love, peace and harmony in the universe for all eternity. The angels knew how it was from the beginning!

When Lucifer and one third of the angels rebelled, they introduced hatred and war into the universe. It had never been that way before!

God tried to get Lucifer to see again how it was from the beginning of their creation and even before their creation—throughout all eternity. But they refused to repent. And now they face “the blackness of darkness for ever”! (Jude 13).

The Laodicean era is the final era of God’s Church. Because of the Laodiceans’ sins, God has to spew them out of His mouth into the Great Tribulation. That means the majority of God’s own people go astray in this end time! That is why the era is labeled lukewarm. But why? How could this happen? Because they lose this “from the beginning” vision. Then they descend into the evil of this world.

“And unto the angel of the church of the Laodiceans write; These things saith the Amen, the faithful and true witness, the beginning of the creation of God; I know thy works, that thou art neither cold nor hot: I would thou wert cold or hot. So then because thou art lukewarm, and neither cold nor hot, I will spue thee out of my mouth” (Revelation 3:14-16). Jesus Christ embodies “the beginning of the creation of God.” This is the same message as John 1:1 and 1 John 1:1.

The Word, who became Christ, was used by God to create all things. So this again takes us back to God and the Word, to “the beginning of the creation of God”—just before they created the angels.

This introductory verse reveals the vision the Laodiceans have lost. They have lost their understanding of the Word. “Behold, I stand at the door, and knock: if any man hear my voice, and open the door, I will come in to him, and will sup with him, and he with me” (Revelation 3:20). Christ is outside of their lives, knocking to get inside!

Remember, these are God’s own people. At one time, Christ was inside their lives. They have moved the great God outside their spiritual temple. Is there any greater tragedy? Spiritually, this is the most colossal disaster of all!

This is why God says the Laodiceans are blind. They don’t see the ultimate spiritual disaster that has struck their lives.

“As many as I love, I rebuke and chasten: be zealous therefore, and repent” (verse 19). Men are always used to do God’s Work. So God uses a small remnant to knock and rebuke, hoping the Laodiceans will repent. Some people accuse us of lacking love when we warn the Laodiceans. Just the opposite is true. We warn them of the danger of losing what they received from the beginning. We do so because God motivates us to love them. They are losing the only great vision and purpose they ever had!

These verses reveal that the Laodiceans are not easily corrected. God knocks, rebukes, and finally scourges before some of them respond.

This is a very strong warning to all of us in this end time! Are we extremely sensitive and responsive to Christ? Are we quick to hear His rebuke? Our eternal future is being shaped by how childlike we are toward the Word’s correction!

“To him that overcometh will I grant to sit with me in my throne, even as I also overcame, and am set down with my Father in his throne” (verse 21). This is the same vision John discussed in his other books. There is the Father, Son and “him that overcometh,” or Christ’s Bride. We get to help our Husband—the Word—be the Spokesman for our Father. We will all sit on thrones and rule the Earth’s inhabitants. God is now building His Family. We must prepare today to rule over the billions of people who are to be resurrected in the future. We are called to become teachers for God. Today we must prepare to teach the world.

If John were here today, you would hear him discuss the Word, as well as Christ. That would give us this magnificent picture from the beginning. To have a strong vision of the future, we must keep this majestic vision of the past! It is the eternal past vision that keeps us focused on the eternal future! The Word should conjure up in our minds this fabulous past. Then we can clearly see God’s plan for His Family and our part in it—forever! (Request our book The God Family Vision for more on this inspiring subject.)

The Word was not just a man named Jesus. Or a man called Christ. He was the Word—from the beginning. It is that beginning John discussed in his epistles.

John did his best to make this message plain. Still, many of God’s people lost their salvation. Many saints are making the same mistakes in this end time. It is the greatest possible tragedy on Earth today! Not because of any punishment they receive, but because they are rejecting the highest calling and reward that God gives to any human beings ever! 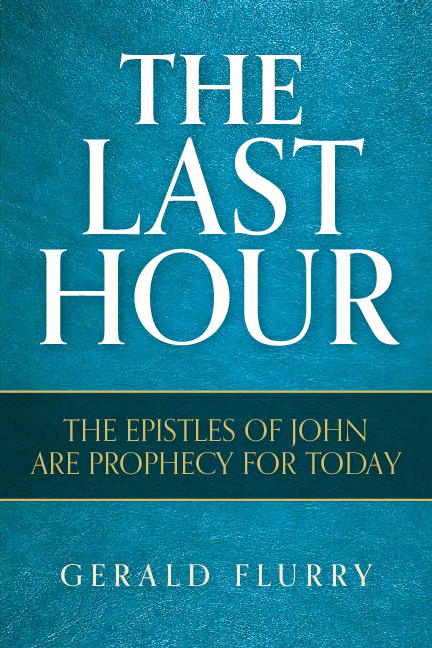