From the booklet God’s Family Government
By Gerald Flurry

In man’s entire history, we have not found one government that will truly serve the people. This whole world is in crisis, and the major problem is government.

Soon we are going to see a government rule this Earth that will work. It’s a government that men have always rejected. Let’s take a closer look at God’s government and see how foolish mankind has been these past 6,000 years for rejecting God’s way of ruling.

“And there was also a strife among them [the disciples], which of them should be accounted the greatest. And he [Jesus] said unto them, The kings of the Gentiles exercise lordship over them; and they that exercise authority upon them are called benefactors. But ye shall not be so: but he that is greatest among you, let him be as the younger; and he that is chief, as he that doth serve. For whether is greater, he that sitteth at meat, or he that serveth? is not he that sitteth at meat? but I am among you as he that serveth” (Luke 22:24-27). God’s government serves those who obey God (and the world, through God’s Work). God’s family government doesn’t go around looking for people’s faults and sins. God’s leaders search for ways to serve the people! That is God’s law of love. If the leaders put themselves first, they are selfishly breaking God’s law of love (Matthew 22:36-40).

God’s leaders serve God’s Family like a dad and mom should serve their family—with love. Dad and Mom also serve by example. So do God’s leaders. That doesn’t mean there isn’t discipline.

“Ye are they which have continued with me in my temptations. And I appoint unto you a kingdom, as my Father hath appointed unto me; That ye may eat and drink at my table in my kingdom, and sit on thrones judging the twelve tribes of Israel” (Luke 22:28-30). God’s leaders and people are going to sit with Christ at the Father’s table. The Father and His Family eat together spiritually—they are, in that respect, like a physical family.

God is a family. He is inviting us to be a part of it. If we accept, we must obey God’s loving Family government.

The door to my office is always open if someone thinks our ministers are implementing harsh and dictatorial government. That is not God’s kind of government. God’s leaders are here to serve God’s people—not be served.

Some of our critics talk as though the Philadelphia Church of God (pcg) is a small and ineffective work. If they look closely, they will see that we have emerged as a powerful work! That is because we submit to God’s family government. That is why God’s abundant blessings are with us.

God gets specific in telling the ministers how to apply God’s government. When correction is necessary, we are told how to do it. “Rebuke not an elder, but intreat him as a father; and the younger men as brethren” (1 Timothy 5:1).

The minister is to correct an elderly man as he would his own father—not rebuking, but entreating him. The approach is more gentle because of his position in the physical family. The physical family is a God-plane relationship. The father has an important role that must be respected.

When the young men must be corrected, they are to be treated as if they were physical brothers of the minister. It is always family government.

“The elder women as mothers; the younger as sisters, with all purity” (verse 2). Elderly women must be lovingly corrected as the minister would correct his own mother. The ministers are to treat the young girls as sisters—and always to keep their thoughts pure toward them. This is the way men normally think about their sisters.

“Honour widows that are widows indeed” (verse 3). The widows have no physical family. This is all the more reason why the minister must honor her—as he would his own mother.

It’s easy to overlook a widow. God commands that we never neglect them—but honor them as royal members of God’s own Family!

The fatherless and the widows—those without a physical family—get special attention as a part of God’s spiritual Family. “Pure religion and undefiled before God and the Father is this, To visit the fatherless and widows in their affliction, and to keep himself unspotted from the world” (James 1:27).

Remember Who You Are

“You only have I known of all the families of the earth: therefore I will punish you for all your iniquities” (verse 2). The root word of the word known is used in marital relations. The English equivalent is to make love. Christ is the spiritual Husband of His Church. They are spiritual “lovers.” This is a unique, loving relationship that exists only between God and His Church.

So we see that Amos 3:1 is primarily discussing God’s spiritual Family. Today, that Family is divided. God’s Family should be deeply united. The book of Amos is mainly focusing on God’s Church! And its prophecies are being fulfilled this very moment. These prophecies are only for the world secondarily. God’s people must awaken and fear God more acutely. We can’t hide from our God-given responsibility!

God’s Family has had a spiritually loving relationship with God. They received a special calling from God the Father (John 6:44). It is the highest possible honor. “You only have I known of all the families of the earth …” (Amos 3:2). “You only”! It is a rare and glorious honor to know the great God spiritually. But many of God’s people now have a ho-hum attitude and have grown lukewarm.

So what is God’s response? Because God has known only you, He says, “… therefore I will punish you for all your iniquities” (verse 2). With this great honor of knowing God—as no one else does on this planet—comes a weighty responsibility. If God’s people fail in their responsibility to God and the world, then God is going to punish them!

“You only”—only God’s true Church is God’s Family. What a precious calling it is to now be a part of God’s own Family. However, many are turning away from God in this end time. It causes a family split. That is what Amos 2 and 3 are about.

Herbert W. Armstrong always said he was a “father” to all of us either directly or indirectly. (He fulfilled the same role Paul fulfilled in 1 Corinthians 4:15.) God used that man—and that man only—to teach us about the true family government of God in the end time!

Today we see God’s own Laodicean Church rebelling against this family government. Of course, that too was prophesied (Revelation 3:14-20). The Prophet Malachi spoke of it in detail. (Request a free copy of Malachi’s Message.) “For the priest’s lips should keep knowledge, and they should seek the law at his mouth: for he is the messenger of the Lord of hosts. But ye are departed out of the way; ye have caused many to stumble at the law; ye have corrupted the covenant of Levi, saith the Lord of hosts. Therefore have I also made you contemptible and base before all the people, according as ye have not kept my ways, but have been partial in the law. Have we not all one father? hath not one God created us? why do we deal treacherously every man against his brother, by profaning the covenant of our fathers?” (Malachi 2:7-10). This is discussing a church split in this end time. God says we all have “one father.” The deceived Laodiceans have rejected both God the Father and His Family government.

These deceitful ministers must be refined. It is family correction for these “sons of Levi” (Malachi 3:3).

However, God protects His loyal people. God treats them as a man would his own son. God the Father would never want His loyal sons to experience the Great Tribulation if that can be avoided. Those sons who hold fast to God’s family government shall be protected (verse 17).

The Laodicean sons must experience the Tribulation to repent (Revelation 3:19-20). The main reason is that they have rejected God’s family government.

The Wife Is Made Ready

God’s family government structure is now being built. “Let us be glad and rejoice, and give honour to him: for the marriage of the Lamb is come, and his wife hath made herself ready” (Revelation 19:7). God’s true Church is God’s wife. She submits to her Husband, Jesus Christ.

The Father and Son theme is mentioned repeatedly in the Bible (see Hebrews 1:1-2, 5). God is going to reward His sons by letting them rule the universe. “But one in a certain place testified, saying, What is man, that thou art mindful of him? or the son of man, that thou visitest him? Thou madest him a little lower than the angels; thou crownedst him with glory and honour, and didst set him over the works of thy hands: Thou hast put all things in subjection under his feet. For in that he put all in subjection under him, he left nothing that is not put under him. But now we see not yet all things put under him” (Hebrews 2:6-8). What an incredible future. However, it is only for God’s Family. “But we see Jesus, who was made a little lower than the angels for the suffering of death, crowned with glory and honour; that he by the grace of God should taste death for every man. For it became him, for whom are all things, and by whom are all things, in bringing many sons unto glory, to make the captain of their salvation perfect through sufferings” (verses 9-10). God is bringing many sons to glory. God and Christ are doing that—Father and Son. Creating that kind of perfection in carnal people can’t be done without suffering—or government.

God will put the whole universe under our governmental control. This is promised only to God’s people. Only God’s true Church understands this now. How blessed God’s people are! “For both he that sanctifieth and they who are sanctified are all of one: for which cause he is not ashamed to call them brethren [brothers]” (verse 11). We are Christ’s own brothers—incredible! Most religions don’t understand this! How unique God’s chosen people are.

If God is going to give us such awesomely exalted offices, surely we should expect some correction. “For whom the Lord loveth he chasteneth, and scourgeth every son whom he receiveth” (Hebrews 12:6). God chastens and scourges every son. The word scourges can mean very hard correction—if that is what it takes to bring a son back to his Father.

“If ye endure chastening, God dealeth with you as with sons; for what son is he whom the father chasteneth not? But if ye be without chastisement, whereof all are partakers, then are ye bastards, and not sons” (verses 7-8). God is always dealing with us as sons. If we refuse correction, then we are spiritual bastards! That means God doesn’t correct us anymore.

Our greatest curse is when our Father no longer corrects us. Then we are no longer a part of His Family! God ceases to be our Father.

Our greatest blessing is being corrected by our Father! That means we’re not spiritual bastards.

Christ was always totally subject to His Father’s government. We must follow His example (1 Peter 2:21).

Lucifer, who became Satan, led one third of the angels to rebel against God’s government. He is continually and persistently trying to deceive you, as he already has the Laodiceans. It’s a vicious battle. Let’s make sure we don’t underestimate Satan’s power to deceive!

How deeply do we want God to rule us? Only those who learn that lesson will be prepared to rule with Jesus Christ! 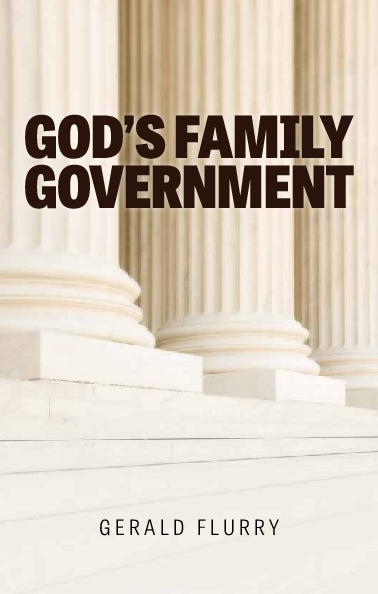