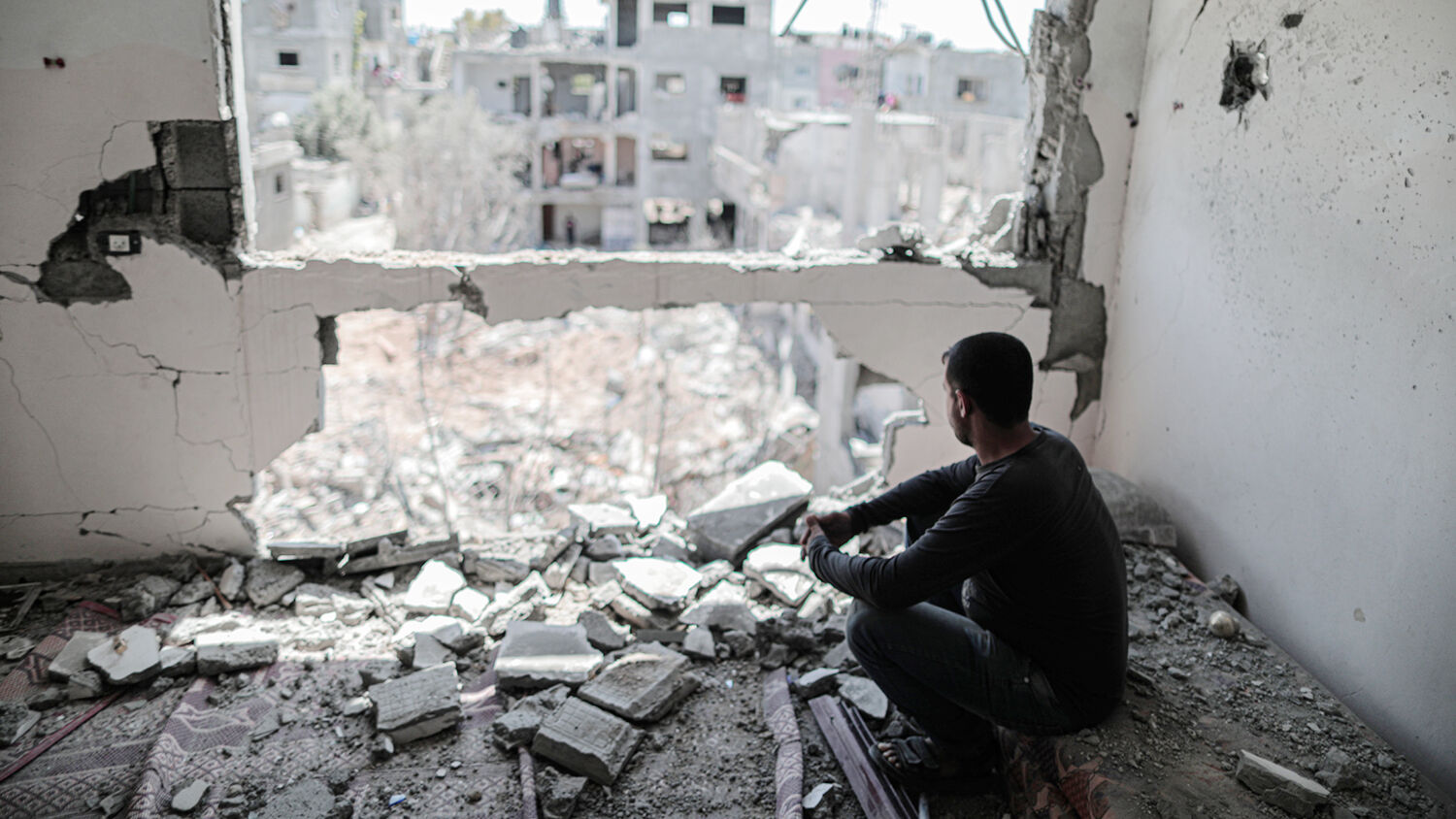 A destroyed house seen after a ceasefire between Israel and Gaza fighters, in Beit Hanun town northern Gaza Strip, May 21, 2021.
Momen Faiz/NurPhoto/Getty Images

Israel’s conflict with Hamas has exposed some critical changes in the State of Israel’s relations around the world.

The most important regards the United States. The conflict exposes just how radically different the Biden administration is from President Donald Trump’s. In just a matter of months, Israel’s relationship with its most critical ally has crumbled. Our man in Jerusalem, Brent Nagtegaal, has written on the radical change in the relationship and what it means.

But another set of relationships has shifted, seemingly to Israel’s benefit.

“You have made Gaza a graveyard for the innocent and children,” tweeted Waseem Yousef to his 1.6 million followers. A popular Muslim preacher in the United Arab Emirates condemning Israel would not be news. But Yousef was actually blaming Hamas.

“Hamas launches rockets from within civilian neighborhoods and when the response comes Hamas cries ‘where are the Arabs and Muslims’? You have made Gaza a graveyard for the innocent and children,” reads the full tweet. Remember, the U.A.E. is not America—a land with free speech and free religion. Its government is allowing Yousef to post this.

Meanwhile, Saudi Arabia has condemned Hamas’s missile attack on Israeli civilians. Geopolitical Futures founder George Friedman noted that both events are indicative of “a significant shift in Arab sentiment toward events in Gaza.” Across the Middle East, Arab messages of support for the Palestinians and condemnation toward Israel have been more tepid than usual.

But this is not the only significant shift.

“The Next Attack on Israel’s Existence Comes From the U.S.A.” was a May 16 headline for Die Welt. “Israel has always been able to rely on Washington,” the article noted. “But the current conflict shows how far the Democratic Party has slipped to the left. Demands by some congressmen are shaking the foundations of the Jewish state.”

Israel has received more supportive statements coming from Germany. “We stand for Israel’s right to self-defense and that’s why it is right that Israel is taking massive action,” said German Chancellor Angela Merkel. German Foreign Minister Heiko Maas traveled to Israel over the weekend. He also supported Israel’s right to defend itself against “massive and unacceptable attacks” and promised that Germany’s support “is not limited to words.”

He was “grateful for Germany’s support since the beginning of the war,” he said.

On May 20, politicians from almost all of Germany’s political parties gathered at the Brandenburg Gate in Berlin to express support for Israel. Die Welt wrote that “the commitment of the federal ministers, parliamentary group leaders of all parties represented in the Bundestag, with the exception of the AfD [Alternative für Deutschland], and other top people was unanimous: We stand firmly on Israel’s side.”

“The security of the Jewish state is a German raison d’etre,” said vice chancellor and Social Democratic leader Olaf Scholz. “Whoever attacks Israel and Jews in Germany is attacking us.”

But Germany isn’t Israel’s only European friend. Austria flew the Israeli flag over its chancellery building in Vienna on May 14—prompting a diplomatic tiff with Turkey and prompting Iran’s foreign minister to cancel his visit.

France increasingly sees Israel as an ally in their fight against radical Islam. “We have a common front with Israel: the struggle against Islamist terrorism,” said Aurore Bergé, French parliament spokesperson for the La République En Marche! party. “More than ever, it’s what brings us closer and what explains the diplomatic shift in Europe.”

Foreign Policy noted that the Continent had seen a “progressive, undeniable shift” in its relationship with Israel. “The most recent fighting with Palestinians has revealed a radical change in European foreign policy that’s been years in the making,” it wrote. It pointed out that part of this stems from the Abraham Accords. Supporting Israel used to mean alienating the Arabs. Now it doesn’t.

None of this makes Angela Merkel the next Donald Trump; there will be no “Merkelville” next to Trump Heights. Germany is not as supportive as President Trump. But with America swinging to the radical left, suddenly Germany looks like a relatively appealing partner. Throw in President Emmanuel Macron’s increasingly anti-Islamist France and President Sebastian Kurz’s Austria, and Europe looks like a good bet for Israel.

The Abraham Accords seem to have eroded the Arab world’s opposition to Israel, while the rise of the radical left in America seems to have made Europe the relatively better partner. But looks can be deceiving.

At the start of this year, Trumpet editor in chief Gerald Flurry warned that “these recent peace pacts have a deadly flaw.” He continued:

Biblical prophecy gives us deep insight into these agreements. It actually foretells that moderate Arabs will unite, somewhat like we are now seeing. But they are prophesied not to cooperate with the United States or Israel!

A prophecy in Psalm 83 exposes a hidden reality behind these peace deals. We are already in the beginning stages of its fulfillment.

Psalm 83 forecasts an alliance of nations that will come together against Israel. The Bible emphasizes that this alliance plots in secret. Verse 3 says, “With cunning they conspire against your people; they plot against those you cherish” (New International Version). This alliance includes the Ishmaelites—the Arabic descendants of Ishmael (verse 6). It also includes Assur, or Assyria—modern-day Germany (verse 8).

The very nations that look like potential allies are prophesied to plot against and betray Israel.

Other scriptures show that this betrayal revolves around a peace deal. Already, many of the parties involved are trying to broker a deal. Germany’s foreign minister visited Israel for exactly that purpose and pledged €40 million (us$48.9 million) for humanitarian assistance in Gaza. U.A.E. Crown Prince Sheikh Mohammed bin Zayed said over the weekend that his nation would be willing to mediate between the two sides.

“While it seems that these nations are moving away from radicalism and violence, we must look beneath the surface,” wrote Mr. Flurry. “After all, this prophecy reveals that they will take ‘crafty counsel’—subtle and shrewd dealing. This sure prophecy shows that these nations will ally to try to blot out the name of Israel forever! That is intense hatred!”

A look beneath the surface quickly reveals these nations are not to be trusted. Waseem Yousef, the Israel-supporting cleric in the U.A.E., has suffered for his stance. His government may be happy to let him proceed, but in Jordan, several members of Parliament have called for his Jordanian citizenship to be revoked. Over the weekend, unsubstantiated reports of Yousef being beaten up and his car burned have been circulating on social media; at this point, it’s unclear if the attack was real or if his many opponents are fantasizing.

In Germany, the widespread political support for Israel came in response to a shocking outbreak of anti-Semitic attacks. Synagogues have been attacked and Israeli flags have been burned in the streets. An Israeli journalist was attacked at one pro-Palestinian rally.

But this isn’t only a problem in Germany’s Muslim districts. A study of 2,500 Germans by Leipzig University last year found that 68 percent mostly or partially agreed with the statement “Israel’s policies in Palestine are just as bad as the policies of the Nazis in World War ii.” That doesn’t sound like the foundation of a lasting relationship.

This anti-Semitic sentiment has found its way into official policies. An investigation by Israel’s Shin Bet found that millions of dollars flowed from the European Union to the terrorist group Popular Front for the Liberation of Palestine (pflp). The EU hands money to nongovernmental organizations (ngos) and has done little to look into where this money goes later. They have, at minimum, been disturbingly complacent in where the money goes. Jüdische Allgemeine noted, “The pflp is classified as a terrorist group by the U.S., EU, Canada, Israel and others, yet many European governments ignore the findings and continue to invest heavily in these ngos, leading to misuse of taxpayers’ money.”

Germany’s Green party was among those that gathered in Berlin to support Israel. But Friday for Future—a youth movement with links to the Green Party—sided with Hamas. They tweeted that nonviolence is not an “appropriate option” for Palestinians.

In his article, Mr. Flurry warned:

Germany and its European allies will enter “the glorious land,” Jerusalem—not by force, but under the guise of peace. The indication here is that Israel will actually invite the Germans in because they believe they already have peace with them.

The current peace deals between Israel and the Arab states are creating this sense of security. But Israel should be more aware of history and prophecy!

What awaits the Jews at the hands of this European-Arab alliance is one of the most treacherous betrayals in history!

On the surface, the response by Germany and these Arab states to the Gaza conflict are increasing that sense of security. But it is a mirage.

Israelis will try just about anything to bring peace—except look to God. But they’re not alone in this. Our problems may be different, but none of us are turning to God to solve them.

Events in the Middle East are proving that man cannot solve these problems without God. It’s a lesson the whole world will have to learn.

Jerusalem contains a message that God will soon give the whole world. To learn more about that message and events in this region, read our free booklet Jerusalem in Prophecy.