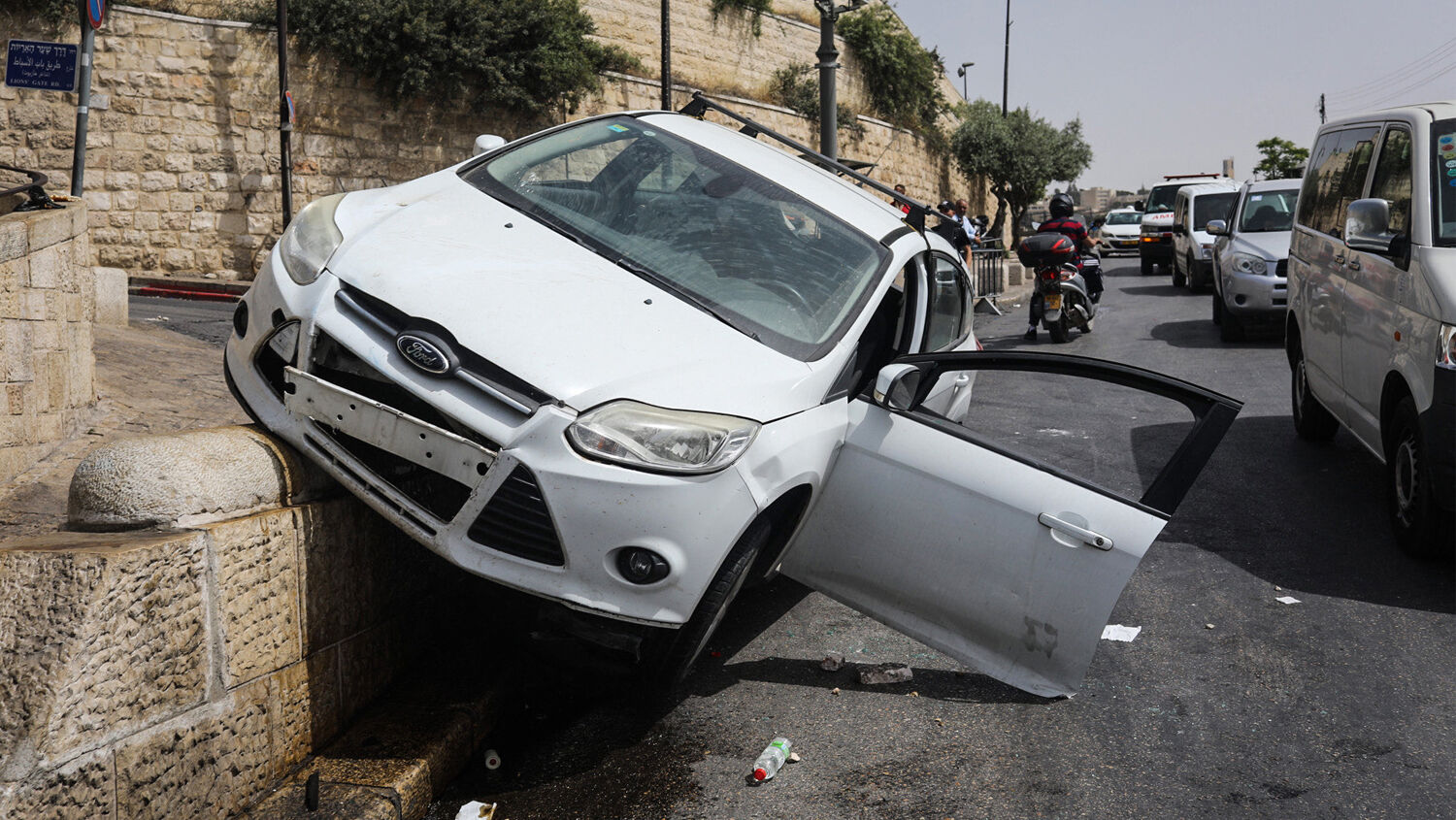 An Israeli crashed into a wall after he lost control of his vehicle as it was pelted with stones by a group of Palestinians near the Lions’ Gate entrance to the Old City of Jerusalem.
Ilia Yefimovich/picture alliance via Getty Images

Major riots in East Jerusalem bring one of the Bible’s most critical prophecies into focus. And it’s being egged on by the United States.

jerusalem
Jerusalem Day celebrations had barely started earlier today when massive riots broke out on the Temple Mount. Before dawn this morning, photos emerged of rocks and stones inside the Temple Mount compound indicating that Arabs were planning an attack. Shortly afterward, Arabs started to attack the Mugrhabi Gate, which is the entrance to the Temple Mount from the Western Wall. Police responded and briefly restored calm before rioting again started up in the compound before lunch.

Just outside the Old City walls, Arabs attempted to lynch a Jew as he drove around the outside of the Old City by the Lions’ Gate. Arabs pelted his car with boulders and stones. As he tried to escape, his car ran into a pedestrian. His car continued to be pelted with rocks until a lone policeman stepped in to save the man.

Jerusalem, a short while ago: A Jewish man narrowly escapes lynching after his car is pelted with rocks. A policeman on the scene stops the violent mob. pic.twitter.com/OmkwkfGPQv

Then, just after 6 p.m. local time, air raid sirens went off in Jerusalem for the first time in over seven years. The loud booms of several impacts were heard through the city as a Hamas missile fired from the Gaza Strip landed on the outskirts of the city. Dozens of Hamas rockets are still coming down on the areas surrounding the Gaza Strip. Hamas claims the rocket fire is in response to Israel’s aggression in Jerusalem.

Today’s violence had been brewing for weeks. Through the Muslim holy month of Ramadan, mainly youth have been going to the al-Aqsa Mosque—not to pray but to insight further violence.

Flags of the terrorist group Hamas have been seen everywhere on the Temple Mount, with groups chanting for the destruction of Tel Aviv and calling for other atrocities on the Jews.

This is how the riots on the #TempleMount bagan this morning, when Palestinian rioters attacked the Mughrabi Gate. The police intervened in order to disperse them.

The right to pray in guarenteed, the right to riot is not. #Jerusalem #AlAqsaMosque pic.twitter.com/GGaRt21Vfd

Three weeks ago, several Arabs started posting videos to social media glorifying random acts of violence against Jews that took place in Jerusalem. What became known as the “TikTok intifada” led to large counterprotests of Jewish youth against the Arabs. Police effectively separated the groups, but dozens of police were injured as well as several dozen Arabs, who were mainly rioting at the Damascus Gate, the main exit of the Old City to northeast Jerusalem.

Following that, this past week, massive nightly protests have taken place about a mile north of the Old City in the predominantly Arab neighborhood of Sheik Jarrah. On Thursday, the Supreme Court of Israel was due to decide whether to uphold a lower court decision to evict the nonpaying Arab tenants of four Jewish-owned properties in the area. The court has delayed the decision.

Yet the false narrative that Israel is ethnically cleansing Arabs from East Jerusalem has spread like wildfire across Israel and the world.

The truth about Sheikh Jarrah.

The United Nations, the European Union, Gulf states and many other nations have all made statements condemning Israel’s actions. Most critically, the Biden administration has joined the chorus of international condemnation against Israel.

On Wednesday, the United States State Department spokesperson said, “As we have long said, it is critical that Israel refrain from unilateral steps that exacerbate tensions or take us further away from peace. This includes evictions, settlement activity and home demolitions, and certainly includes the legalization of Israeli outposts in the West Bank that have long been illegal even under Israeli law” (emphasis added).

Critically, this statement included “evictions” as a point of disagreement with Israel. Typically, the U.S. would not weigh in on an Israeli domestic matter such as this.

“…it is critical to avoid steps that exacerbate tensions…This includes evictions in East Jerusalem…”
Dear @StateDept: the evictions are due to Arabs occupying homes they do not own.
✌️Arab✌️ ✌️Occupation✌️.https://t.co/QOG1uTJ44Z

This indicates that the Arabs have the full support of the Biden administration in regards to the properties in question in Sheik Jarrah. It also makes it increasingly difficult for the Israeli Supreme Court to uphold the law inside East Jerusalem without severe blowback from America.

This puts the U.S. firmly on the side of the Palestinians on this issue—including Hamas.

The head of Hamas’s armed wing, the Izz ad-Din al-Qassam Brigades, warned last week that Israel would pay a heavy price if it carried out the lawful evictions. “I salute our steadfast Palestinians at Sheikh Jarrah in occupied Jerusalem. The resistance leadership and al-Qassam are watching closely what is happening in the neighborhood,” Mohammed Deif said.

“This is our final warning; If the aggression against our people in the Sheikh Jarrah neighborhood does not stop immediately, we will not stand idly by and the occupation will pay a heavy price,” he warned. Hamas’s statement coincides with similar statements by other Iranian proxies, indicating that Iran is playing a role in the uprising.

Al Qassam Brigades spokesman, Abu Ubaida “We salute the steadfastness of our people in Jerusalem and Al-Aqsa, and we tell them that the Commander of the Qassam Military Wing , Muhammad Al-Deif, has promised you and will not break his promise. pic.twitter.com/o02wSM7Ach

Israel is taking the threat seriously and is endeavoring to stop the infiltration of Hamas members into Jerusalem to further agitate the rioters. Israel TV reported that on Friday three armed Hamas-affiliated Arabs were attempting to travel to Jerusalem when their bus was stopped for a check at a border crossing in northern Israel. A firefight erupted with Israeli border police, leaving two of the Arabs dead and the other injured in hospital. According to Israeli police, the terrorists were headed to Jerusalem for an attack.

Friday’s attempted infiltration by the would-be terrorists further justified Israel’s blockade of Route 1 into Jerusalem on Saturday. However, the optics of stopping busloads of Arabs coming to Jerusalem to “celebrate” the end of Ramadan only further increases the likelihood that more in the Arab street will become enraged.

Israel is between a rock and a hard place when it comes to slowing down the escalating violence.

If Israel attempts to contain the Arab rioting, selectively edited video is instantly spread on social media to make it seem Israel is trying to shut down the religious freedom of the Arabs. If Israel lets the mob in, Hamas and other terrorist elements will take advantage of the situation, threatening the safety of Israeli citizens in Jerusalem.

Furthermore, with President Donald Trump out of office, Israel faces an uphill battle to find any international support for the Jewish State’s position over East Jerusalem. Certainly, Israel cannot hold out any hope of United States support under the current administration.

The Trumpet has often drawn attention to the fact that Biden’s government is simply Barack Obama’s third act.

One month before President Obama left the White House, the United States infamously broke with its historic precedent of supporting Israel at the United Nations, an institution with systemic bias against the Jewish state. Collective applause erupted in the UN hall when U.S. Ambassador Samantha Powers raised her hand to allow passage of Resolution 2334, which labeled illegal any Israeli settlement in the land occupied by Jordan before 1967. According to the resolution, Israelis living in the Jewish Quarter of the Old City of Jerusalem are criminal squatters.

At the time the resolution passed, we described Obama’s decision to side with Israel-bashers instead of the Jewish state as a “parting shot” against America’s greatest ally in the Middle East.

Now Obama’s final act is turning into the opening scene of the Biden administration’s Jerusalem policy. Obama’s goal for Jerusalem’s fate lives on in the Biden administration. That goal is to declare illegal any Israeli sovereignty in East Jerusalem and to support the Palestinian cause to acquire that territory. While Biden’s team has yet to endorse an armed uprising to take East Jerusalem by force, its statements condemning Israel’s lawful evictions certainly give the Arabs justification to continue their riotous struggle against the “occupier.”

It used to be that America lambasted Israel’s “settlement building” deep in the West Bank. Now it seems, America is setting its sights on Israel’s control of East Jerusalem.

This is deeply concerning for Israel.

The euphoria over the Israel-U.S. relationship during President Trump’s tenure is quickly turning into the nightmare of Barack Obama’s third term. Continue to watch as America pressures Israel to reduce its sovereign power over East Jerusalem. America will likely cloak its tacit support for Palestinian control over East Jerusalem through further UN resolutions and international law. It will likely send out innocuous statements for both sides to “reduce tensions.” Yet such statements that don’t correctly name the aggressor and victim are always seen as support for the aggressor.

Three weeks ago, before the current violence, Trumpet editor in chief Gerald Flurry warned our readers to watch for increased terrorist attacks in Jerusalem because of the Biden administration’s position. He wrote:

For America to support Iran makes no sense, unless you realize that this leader is trying to blot out the name of Israel! Iranian leaders talk about this all the time. This nation wants to blot out the name of Israel. That includes America and Britain. Yet Americans allowed their president to enact that foreign policy. And now, that foreign policy is back! Biden is empowering Iran so it may soon obtain nuclear weapons. I am certain we will have more Palestinian terrorist attacks now because of who is in charge.

Almost immediately after that statement was printed, the violence in Jerusalem increased. The connection to the Biden administration’s pro-Palestinian positions is unmistakable.

But there is also another prophecy coming into focus. For over two decades, Mr. Flurry has urged our readers to pay attention to the rift between Jerusalem’s Arab and Jewish populations. Based on a critical prophecy in the book of Zechariah, Mr. Flurry has forecast that East Jerusalem will fall under Arab control. He wrote:

Today the Arabs live in roughly one half of Jerusalem. They just don’t control it—yet. … Looking at the ongoing violence in Jerusalem today—the absolute inability of the involved parties to solve things by peaceful means—we can easily see how one half of Jerusalem shall be taken captive in the very near future. The present violence is an embryo that is about to grow into much greater violence. That is the critical event prophesied in Zechariah 14:2.

Looking at Israel’s superior military, it’s easy to dismiss the notion that it would ever lose control of East Jerusalem. But what if the United States started to support and justify Arab violence in order to take over that territory? Then the notion becomes far more likely.

Now is the time to watch Jerusalem for the fulfillment of this prophecy. This uprising of violence against the Jewish control of East Jerusalem is not just the latest iteration of Arab-Jewish violence. If you live in Israel, you know that something even feels different about the violence this time around.

The hope in such an atmosphere is holding onto the understanding that half of Jerusalem’s fall is actually prophesied in your Bible. When it happens, it also means that the countdown to the coming of the Messiah has begun. For a complete understanding of what half of Jerusalem’s fall means for the future of the city, as well as what Zechariah prophesied next, please read Gerald Flurry’s free booklet Jerusalem in Prophecy.