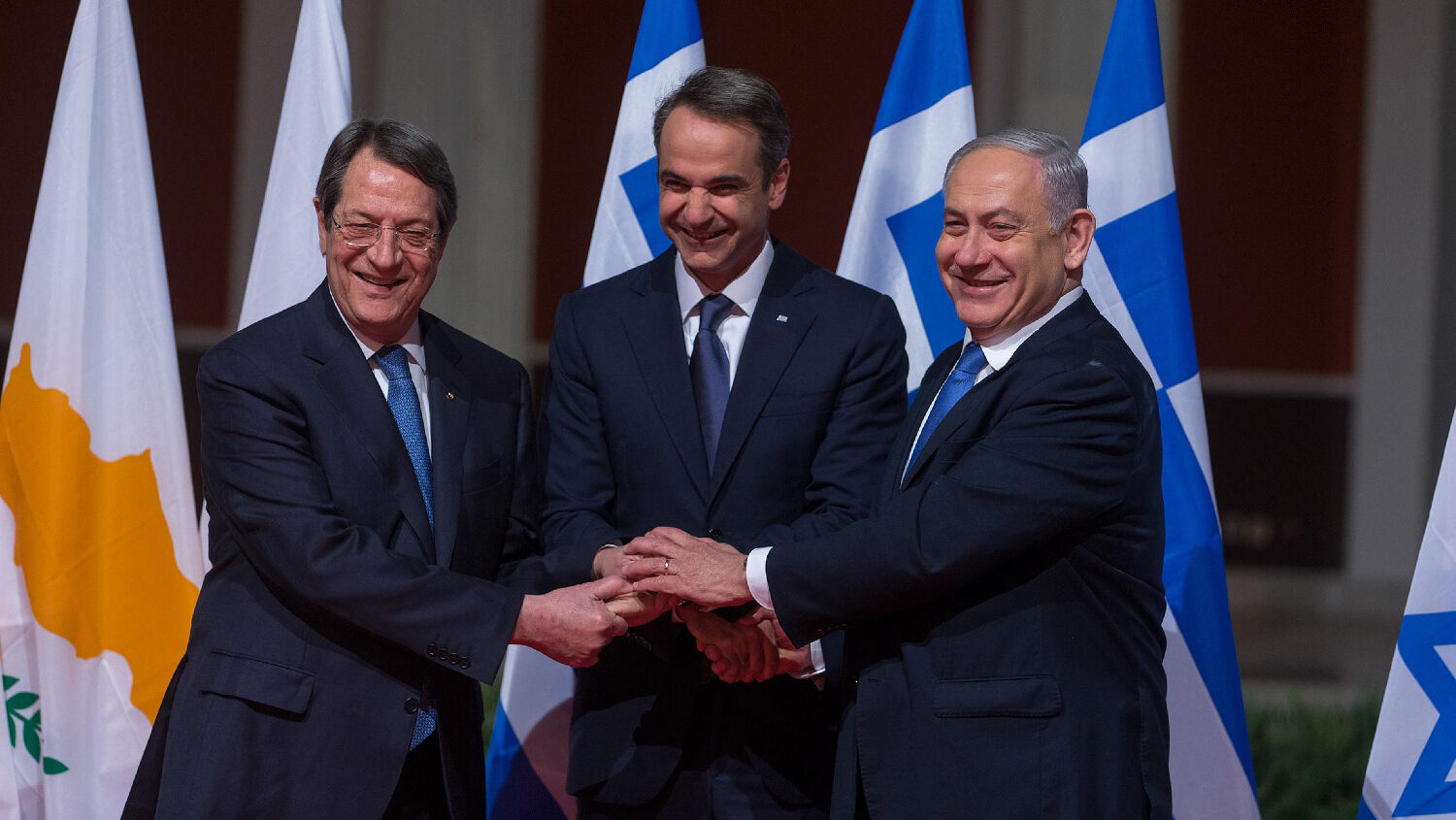 The world is focused, rightly, on the Middle East right now. But another shift, just to the east, could be equally significant.

A new pipeline has set in motion a shift in alliances that has major implications for Europe and the world.

On January 2, Israel, Cyprus and Greece signed a deal to build a new natural gas pipeline, connecting gas reserves in Israeli and Cypriot waters to Greece. A later project is planned to connect Italy.

But while the three countries have been negotiating, Turkey has been plotting the pipeline’s demise.

It has formed an alliance with one of the factions in Libya’s civil war to try and extend its territory and thwart the deal.

Turkey and the United Nations-backed Libyan Government of National Accord (gna) signed an agreement on November 27 that sets the maritime boundaries between the two nations. The territory claimed by Libya cuts straight across the proposed pipeline route.

Turkey’s agreement with Libya is unreal and can block the Mediterranean. pic.twitter.com/uW1atMKw0s

“In striking the deal with Libya, analysts say Ankara has essentially put both Greece and Cyprus on immediate watch, showing it is prepared to act tough to get its way and/or force new negotiations over their long-standing disputes,” wrote Reuters.

To cement the alliance, Turkey sent soldiers to Libya. Turkish President Recep Tayyip Erdoğan confirmed their arrival on Sunday. Turkey also announced its plans to buy six new submarines, beefing up its ability to hold the territory it claims.

All this marks a big shift for the region. Here’s what it changes:

Cyprus is right in the middle of all this, and it’s a country that needs to be on your radar. It was also the subject of Trumpet editor in chief Gerald Flurry’s November-December 2019 cover article, “Why Germany Conquered Cyprus.”

In that article, he explained that Germany has used its economy to dominate Cyprus because it is crucial to projecting power into the Middle East and North Africa.

He also forecast that Germany would gain more military dominance on Cyprus.

“Britain has two large bases on Cyprus, taking up about 3 percent of the country,” he wrote. “Yet the nation really controlling this area has been the United States; those bases have been an invaluable asset in America’s Mideast military campaigns. Now, however, Britain is leaving the European Union. … Justified as it might be, Brexit puts the future of those bases on Cyprus in doubt. I forecast that Britain is going to lose control of those bases. … Brexit gives Germany a chance to take over those British bases.”

Now, Cyprus is menaced by an expansionist Turkey. Turkey invaded the northern part of the island in 1974, and the Turkish Army still has a major presence there.

Now it is planning to set up a naval base on the island, the Turkish pro-government Milliytet newspaper reported on December 25. Turkey has also been sending its drilling ships into Cypriot waters, drawing condemnation from the European Union.

With Turkey stepping up the pressure, Cyprus needs allies more than ever. America won’t help much; it is looking to get out of the Middle East. It’s easy to see that Turkey’s expansion will push Cyprus closer to Europe—and Germany.

Turkey’s shift from an alliance with the U.S. to an alliance with Russia has been one of the big stories of recent years. Yet as we’ve pointed out from the start of the shift, Turkey and Russia don’t have a huge amount in common, and the relationship cannot last.

Turkey stepping into the Libyan civil war could really strain relations with Russia. Russia is backing the Libyan National Army, sending mercenaries and weapons. Turkish soldiers and Russian mercenaries are now fighting on opposite sides of the war. They could even end up shooting at each other.

It’s possible that the two have already come to some kind of arrangement. But even so, it shows that as Turkey flexes its muscles in the region, its interests will increasingly put it at odds with Moscow.

Turkey is growing into quite the expansionist power. It has the most powerful military in the Middle East. Its navy is the fourth largest in the region. This year, it is scheduled to become the proud owner of a new aircraft carrier—the ultimate symbol of power projection.

Turkey has invaded northern Syria and sent more than 2,000 soldiers into Iraq. It has a major overseas base in Somalia and a smaller one in Qatar.

George Friedman described Turkey’s move into Libya as “a major shift.” In Syria, and elsewhere, it has already been “extending Turkey’s unofficial border into Ottoman-era territories.” This recent move steps up that policy considerably.

Libya is a major source of oil and gas. Turkey, unable to find any in its own territory, has been watching its neighbors strike it big with undersea deposits. Influence over Libya’s resources could help make up for Turkey’s lack.

“In addition to wanting to secure sources of energy, Turkey wants to make it clear that the Eastern Mediterranean is a region where Turkish interests have to be considered,” wrote Friedman. He concluded that “the maritime delimitation agreement with Libya has made Turkey the driving force in the region for now and, we think, in the long run.”

This is probably the biggest takeaway from the whole story. Whether it’s the Syrian war, Israeli natural gas or Libyan resources, Turkey is making a clear and bold statement: If you’re going to do anything, we must be involved. If not, we have the power to make things much more difficult.

The Alliance to Watch For

Turkey’s not a superpower, but it cannot be ignored. We’ve been watching for one country in particular to pay special attention to Turkey.

Russia and Turkey have a long history—of fighting. Just try counting how many wars they’ve been on opposite sides of. Hint: A lot of them are simply called “the Russo-Turkish War,” with the dates in brackets. They were so common, historians didn’t even bother giving them numbers.

Once the Ottoman Turks settled down and stopped trying to take over Vienna, they had a much more stable relationship with European powers—especially with Germany. As Germany unified and rose in power in the late 19th century, Turkey was its gateway to the Middle East. Turkey went through coups and revolutions, but Germany worked hard to remain its partner.

This culminated with Turkey fighting alongside Germany in World War i. Germany used this alliance to spread its influence across the Middle East. Turkey was the key pivot in Germany’s effort to stir Arabs into revolt against the British Empire.

“Germany sought to harness the forces of militant Islam to its cause with the help of its ally Turkey,” wrote historian Peter Hopkirk in his book On Secret Service East of Constantinople. “By unleashing a holy war against them, Wilhelm and his hawkish advisers aimed to drive the British out of India, and the Russians from the Caucasus and Central Asia. It was a bold and adventurous strategy, for there were no precedents for a jihad in modern warfare.”

Turkey and Germany already have a close relationship. Germany is Turkey’s top trading partner and the destination for 10 percent of its exports. Germany has been relying on Turkey to stop its migrant crisis. The EU pays Turkey to stop Syrian migrants from traveling to the rest of Europe.

Military relations between Turkey and Germany have been so close that, in 2017, Germany’s Handelsblatt wrote an article titled “Turkish Military Power, Made by Germany?”

These days, relations between the two have been strained. Erdoğan seems to believe Germany supported the coup against him in 2016, and in 2017, Turkey arrested a German citizen working for a German news outlet. Any German cooperation with Turkey is unpopular with the German public because of Turkey’s attacks on Kurds in Syria. These types of tensions would normally doom a relationship. But German leaders have indicated they’re putting more controversial aspects of the relationship—like upgrades to Turkey’s Leopard 2 tanks—on hold until a more opportune time, rather than canceling them outright. When you see Turkey’s actions in Libya over the last month, it’s clear why. If Germany has any ambitions in the Middle East and North Africa, it pays not to upset Turkey.

“You watch what happens with Turkey and Germany,” Mr. Flurry said in a May 2012 Key of David program. “Turkey’s going to be allied with Germany, and Germany is driving a wedge between those two great countries, Turkey and Iran.”

He based this statement on Bible prophecy—a prophecy that aligns closely with current trends.

Modern-day Turks are the descendants of Esau, also known as Edom. For proof, read our article “East, West or Neither?”

Edom is at the top of the list of German allies in this prophecy.

Turkey is also singled out in the book of Obadiah for a major warning. Obadiah says that Turkey will be “as one of them”—referring to the European conglomerate rising in Europe. It is not part of the European Union, but it is a close ally.

Obadiah 14 gives more detail: “Neither shouldest thou [Turkey] have stood in the crossway ….” This crossway is a reference to Turkey’s crossroads position between Europe and Asia; more specifically, it refers to the giant bridge spanning the Bosporus, a literal crossway between European and Asiatic Turkey. The Bosporus Bridge was completed in 1973.

In World War i, Turkey was the bridge for Germany, helping it reach out to other Muslim nations. As Turkey returns to Islam, could it play that role again? Turkey’s and Germany’s interests don’t align perfectly. And though powerful, Turkey is not a superpower—it needs an ally. And a powerful Germany would be a much better fit than either Russia or the U.S. Turkey is both geographically and religiously a nation that Germany can use to expand its power.

Germany’s rise in the world and its push into the Middle East is a key prophetic trend to watch. And the Bible says Turkey will play a key role in enabling that push.

The Bible also reveals that this push is about much more than dealing with Iran or containing the instability in the Middle East. Though it hides it today, the power rising in Europe wants to conquer Jerusalem.

“Jerusalem is one of the holiest sites in Islam. It is also probably the holiest site of the European Union. You will see that more and more as Europe completes its formation into a Holy Roman Empire,” wrote Mr. Flurry. “It currently has 28 member nations, but to play this part as a religious empire, Bible prophecy says the EU will pare down to a smaller number of core nations bound by religion and led by a single strong leader from Germany.”

Turkey will betray Israel in the Middle East, as well as Britain and America, by aiding Germany. All of these events are laid out clearly in prophecies written thousands of years ago. They’re unfolding according to a definite plan.

The book of Obadiah is one of the most sobering books in the Bible. It has some troubling passages about what Turkey will help Europe do to Britain and America—as well as what will come back on Turkey. Thankfully, it ends by saying that “saviours shall come on mount Zion … and the kingdom shall be the Lord’s” (verse 21).

If this book can prove so accurate about Turkey’s fate, then the part about saviors and a coming Kingdom of God can be trusted too. The events of the next few years are part of the process that will lead to the Kingdom being the Lord’s.

For more on what the Bible prophesies for this volatile region for the year ahead, read our free booklet The King of the South.