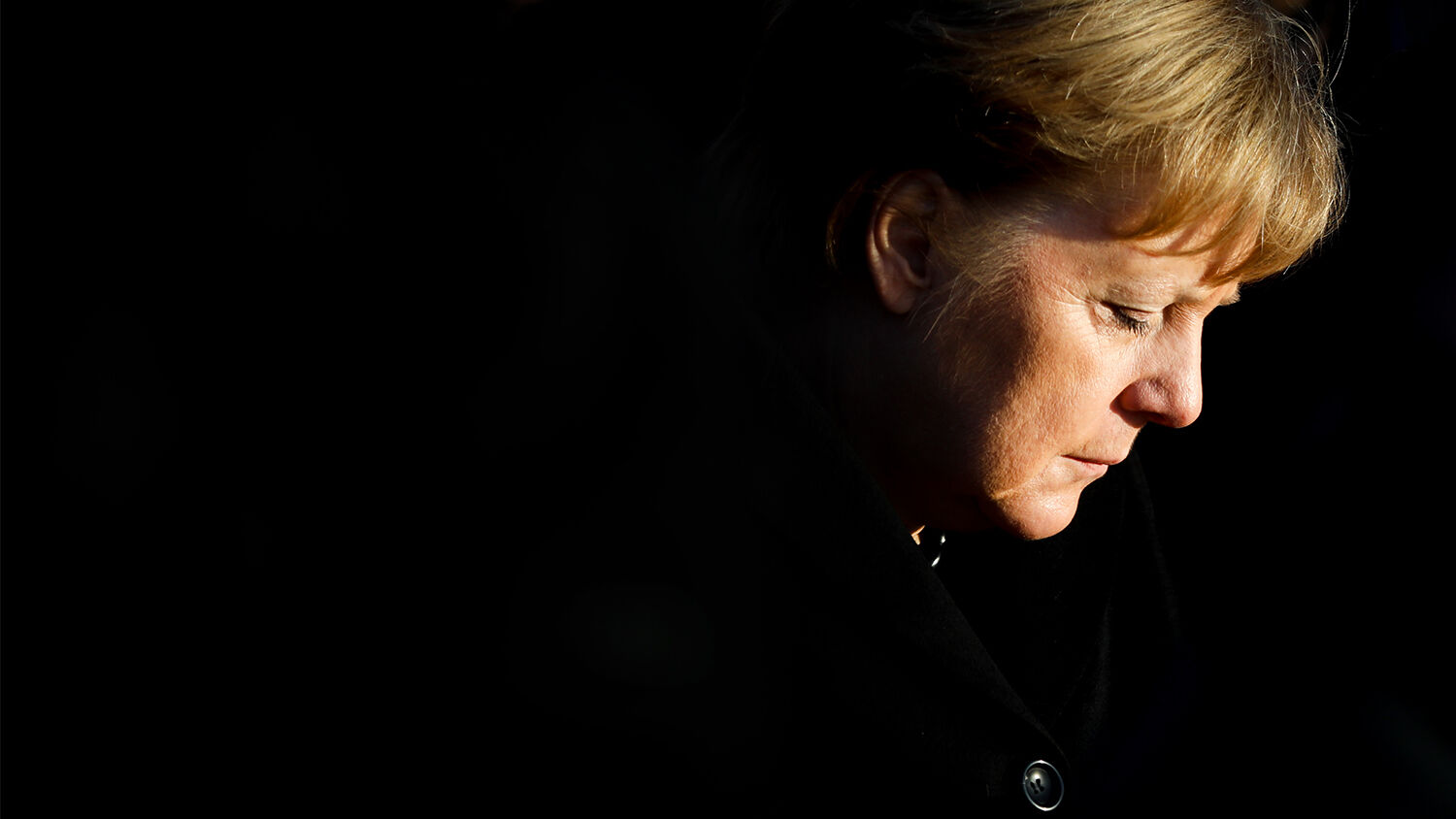 Angela Merkel knows she’s entering the twilight of her chancellorship. But before any political crisis sets in, according to Süddeutsche Zeitung, there was one speech she wanted to make. And to do so, she needed to visit Auschwitz.

Her trip was unusual. Only two previous chancellors have visited the notorious death camp.

But apparently, she had something important she wanted to say before she was kicked out of office.

Ms. Merkel has been unusually strong for a German leader in confronting her country’s past. She has visited Yad Vashem, the Holocaust Remembrance Center in Israel, five times. She has been to Dachau twice and also to Buchenwald. But last Friday, December 6, was her first trip to the most infamous camp of them all—Auschwitz.

In May 2008, she became the first German leader to address the Israeli Knesset, where she said, “The mass murder of 6 million Jews, carried out in the name of Germany, has brought indescribable suffering to the Jewish people, Europe and the entire world.”

Germans, she said, were “filled with shame” over the Holocaust.

Trumpet editor in chief Gerald Flurry called her speech “the most significant speech made by any German leader since World War ii.”

“Considering Germany’s Nazi past, Angela Merkel’s speech should have grabbed world headlines!” he wrote. “I personally have never heard such a repentant statement from a powerful world leader in my life!” (Trumpet, May 2008).

At the time, the Jerusalem Post warned, “Few in Israel realize that a majority of Germans probably disagree with several key statements she made here about her country’s past—including the mention of shame and guilt ….”

That was in 2008—and anti-Semitism has skyrocketed since then.

“It was courageous for Angela Merkel to even make such a statement—even more so when it disagrees with most of her own people!” wrote Mr. Flurry. “The apology could greatly damage her political career. But isn’t that a hallmark of great leadership—leading your people the right way regardless of the political consequences?”

On Friday she brought a similar message.

“I am deeply ashamed of the barbaric crimes perpetrated here by Germans,” she said. But her speech was more than an apology. It was a warning that Germany must keep the memory of what happened at Auschwitz alive—otherwise it could happen again.

“Remembering the crimes, naming the perpetrators, and giving the victims a dignified commemoration—that is a responsibility that does not end,” she said. “It is not negotiable; and it is inseparable from our country.”

She spoke about the worrying rise in anti-Semitism and the “revisionism of history” within Germany that seeks to downplay the Holocaust. She quoted Primo Levi, an Auschwitz survivor, who warned: “It has happened. Consequently, it can happen again.”

“Therefore,” said Ms. Merkel, “we must not close our eyes and ears when people are being mobbed, humiliated or marginalized.”

“These crimes are and remain part of German history,” she said. “This story must be told, over and over again, so that we remain alert, so that such crimes cannot be repeated in any way, so that we can act resolutely against racism and anti-Semitism in all their disgusting appearances. This story must be told so that today and tomorrow we will preserve the dignity of every human being—and that we may honor the victims with an honorable memory.

That’s the message Ms. Merkel wanted to be sure to get out before she is pushed from the scene—that Germans must “remain alert, so that such crimes cannot be repeated in any way.”

Deutsche Welle described how out of tune this message is with parts of modern Germany. “For several years now, calls have been getting louder for Germany to let the past become history and for the country finally to stop being preoccupied with the historical guilt the country has been saddled with by the Nazis,” it wrote. “At the same time, hate crimes against Jews have been on the rise. The two, of course, are closely linked …. Jews in Germany once again must fear for their lives. That is the awful truth.”

Just two months ago, an anti-Semitic gunman attacked a synagogue in the city of Halle. Those inside managed to barricade the door, but he killed two people.

Anti-Semitic attacks in Germany were up 10 percent in 2018 compared to 2017. Violent attacks are up 60 percent. Ms. Merkel warned in May that every synagogue and Jewish school in Germany requires constant police protection. Germany’s anti-Semitism commissioner, Felix Klein, said Jews should avoid wearing their kippahs in some areas to avoid attack.

The Alternative für Deutschland (AfD) party is now a significant force in German politics. One of its leaders, Alexander Gauland, dismissed the Holocaust as a speck of bird muck on an otherwise glorious history. He even said that Germany should be “proud of the achievements of the German soldiers in two world wars.” Another AfD leader, Björn Höcke, has called for a complete turnaround from remembering the Holocaust. He lamented that Germans are “the only people in the world to plant a monument of shame in the heart of its capital”—referring to Berlin’s Memorial of the Murdered Jews of Europe.

Meanwhile, memories are fading. Forty percent of German youth said they know little-to-nothing about the Holocaust. A recent survey by the World Jewish Congress showed that 25 percent of Germans believe another Holocaust could happen.

“We thought serious anti-Semitism was the past. But now we’re rethinking things,” said Andreas Eberhardt, director of the German government organization Remembrance, Responsibility and Future.

AfD members in Parliament “speak about foreigners, the Holocaust and Muslims in a way that a decade ago would have triggered a full-blown scandal—but that today is commonplace,” she said. “They downplay the significance of the Nazi era and demean efforts to reconcile with the past, like the Holocaust memorial in Berlin. Popular tv shows and bestsellers set in the Nazi era treat Germans as victims, not perpetrators.”

In one important way, Merkel’s speech last week may not be as praiseworthy as her 2008 speech. Back then, she had only been chancellor for 2½ years. Now she’s led Germany for 14. The rise in anti-Semitism has happened under her watch. And in some ways, she’s contributed to it.

She opened the floodgates to migrants from the Middle East but closed her ears to the genuine problems it caused. Only the far right would talk about these problems—and so Ms. Merkel has driven millions of voters into the arms of those who hold anti-Semitic views. And many of those migrants themselves brought anti-Semitic views with them.

Even Ms. Merkel herself has shown a blind spot when it comes to those who target their hatred against the Jewish state of Israel in the Middle East. On Saturday, the day after her speech, prominent supporters of the terrorist group Hamas met in Berlin. Local government officials said there was nothing they could do to stop it because Germany has not banned Hamas. In the past, anti-Semitic activists have received visas to travel to Germany to participate in anti-Israel protests. Perhaps Ms. Merkel would like to have done more on this front but was stopped by other government members. Or perhaps this failing is her own. Either way, it is a worrying sign from modern Germany that even those at the very top will tolerate this form of anti-Semitism.

But if Ms. Merkel won’t practice what she preaches, the fact that she is preaching this kind of warning is remarkable.

In his 2008 article, Mr. Flurry warned: “The Nazi spirit is very much alive in Germany. It’s time we woke up. Our leaders are asleep and virtually unaware of the deadliest danger in this world!”

The stirrings of that Nazi spirit are on display more than ever.

“How concerned should we be about what’s going on in Europe?” he continued. “As I said, I think Angela Merkel’s address in the Knesset was a moment of greatness for her. But her view will not prevail in Europe. I know that because of Bible prophecy.”

Based on these prophecies, Herbert W. Armstrong warned that the Nazi spirit did not die in 1945. Looking at Ms. Merkel’s speech, you have to wonder if she realizes the same thing.

The Bible warns of a power that rises repeatedly in Europe, and then disappears. Revelation 17:8 describes a beast, symbolic of a major world power, that “was, and is not, and yet is.” This beast exists, then vanishes—only to then “ascend out of the bottomless pit.” You could say it comes out of nowhere—from “underground.”

Here is how Trumpet editor in chief Gerald Flurry explains this prophecy in his booklet Prophesy Again: “During World War ii, we saw the Hitler-Mussolini axis, but then it disappeared from the scene. It ‘was not’! And yet, God says, ‘it is’! The Axis powers lost the war, but as Mr. Armstrong preached time and again, they just went underground—into ‘the bottomless pit’ (verse 8). They’re still there—they’re just underground.”

This passage adds something vital: What goes down, underground, will come back up again.

Already you can see the signs of that spirit coming back to the surface. Anyone who knows Germany’s history has to take this anti-Semitism and these warnings by Germany’s chancellor very seriously. She, and many others sounding the alarm, doesn’t believe that the Holocaust could never happen again.

Revelation 17 says that when this power fully ascends, “the people who belong to this world … will be amazed at the reappearance of this beast” (verse 8; New Living Translation).

But you do not need to be “amazed.”

The Bible forecast thousands of years ago that this power would rise back up. For decades, Mr. Armstrong gave very specific warnings based on very specific Bible prophecies.

The Bible forecasts a dark time just ahead for Europe. But the same Bible also forecasts a fantastic hope.

To read more about this Nazi spirit in Germany, how it went underground for all these years, and the great hope contained within these same prophecies, read my article “The Nazi Underground—Revealed!” from the August issue of our Trumpet print magazine.