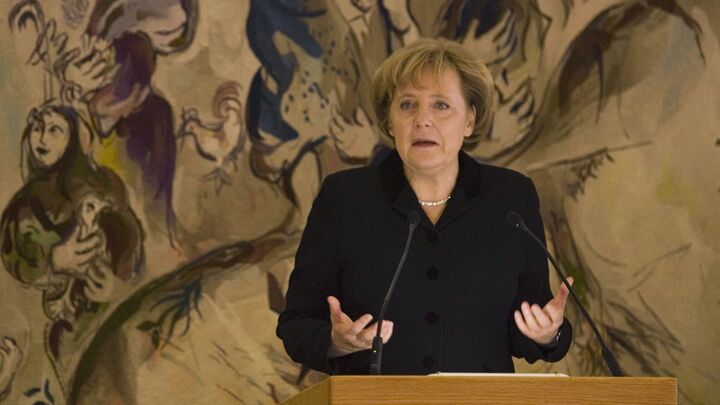 Throughout its history, the Holy Roman Empire has been dominated mainly by Germany and the Vatican. Its most popular political leader was Charlemagne, who was crowned emperor in a.d. 800. Today, some European leaders believe it will take another Charlemagne for the European Union to finally take off as a world power.

Europe is moving very fast toward crowning this new Charlemagne—yet this trend is not getting the headlines it deserves.

German Chancellor Angela Merkel’s Knesset address on March 18 was, I believe, the most significant speech made by any German leader since World War ii. In speaking about the German atrocities committed against the Jews during the war, she made a statement that some people have been waiting to hear for over 60 years. In an apology to her Israeli audience, Merkel said, “The mass murder of 6 million Jews, carried out in the name of Germany, has brought indescribable suffering to the Jewish people, Europe and the entire world.” She said Germans were “filled with shame” over the Nazi Holocaust.

While in Israel, Merkel also visited Yad Vashem—Israel’s Holocaust museum. As it happens, I visited the same museum a month earlier. It was a stirring, emotionally draining experience.

The day after the German chancellor’s speech in the Knesset, Manfred Gerstenfeld wrote a column for the Jerusalem Post titled, “What Angela Merkel Couldn’t Say Out Loud.” He wrote, “Few in Israel realize that a majority of Germans probably disagree with several key statements she made here about her country’s past—including the mention of shame and guilt …” (emphasis mine throughout).

It was courageous for Angela Merkel to even make such a statement—even more so when it disagrees with most of her own people! The apology could greatly damage her political career. But isn’t that a hallmark of great leadership—leading your people the right way regardless of the political consequences?

This speech will have a negative impact on her political career and signals a dangerous turning point in the history of Germany.

And you need to understand why!

Considering Germany’s Nazi past, Angela Merkel’s speech should have grabbed world headlines! I personally have never heard such a repentant statement from a powerful world leader in my life!

Some historians fear that Germany could start another world war. Chancellor Merkel knows that and is working feverishly to avoid such an unparalleled calamity.

Shamefully, her history-making speech hardly made a ripple in world news.

Angela Merkel’s speech was full of statements we might expect from a religious leader. Why, then, has the German Pope Benedict refused to issue a similar apology? If you have been following the pope’s speeches and interviews, you will know that his best-known comments are those that have criticized other groups—especially religions.

In September 2006, the pope quoted a Byzantine emperor who said that anything new Mohammed had contributed was evil and inhumane. He said the Islamic movement had converted people to its faith by the sword. Both comments triggered an outcry of protest from the world of Islam.

The pope has also been openly critical of Protestants, wondering how they could even have the title of “church” attributed to them.

He has removed restrictions on the use of an old form of the Latin mass that includes a call for the Jews to be converted to Catholicism. In February, he revised the “Good Friday Prayer for the Jews” to read: “Let us also pray for the Jews: That our God and Lord may illuminate their hearts, that they acknowledge that Jesus Christ is the Savior of all men.” These alterations have angered many Jews.

Notice what Jason Burke wrote in the Observer last year: “The pope … sparked bewilderment when he made no mention of anti-Semitism, or the fact that the Nazis killed millions of people because they were Jewish, in a speech last year at Auschwitz. He also failed to acknowledge that there might be some degree of collective responsibility of the German people” (July 8, 2007).

It’s astounding to me that a German pope—speaking at Auschwitz, of all places—could not come up with something similar to the comments made by Angela Merkel. I believe he steered clear of the subject because, like many Germans, Pope Benedict xvi disagrees with many of the key statements Merkel made—including the mention of shame and guilt.

Gerstenfeld continued in his Jerusalem Post column, “In contemporary Germany there are significant expressions of anti-Semitism and racism. … At the same time, there are efforts in Germany to rewrite the past. Books by historian Jörg Friedrich, who compares the Allied actions to his nation’s atrocities during the war, are bestsellers.”

That message—that the Allies were just as guilty as Germany was—is popular among Germans! Gerstenfeld continued, “They promote Holocaust equivalence by using Nazi semantics to describe the Allied bombings of Germany during World War ii.”

Rewriting history in order to glorify, or at least excuse, Nazi atrocities is obscene and deadly dangerous reasoning!

Margaret Thatcher, the former prime minister of Britain, once said that the problem with Europe today is that it has been anchored to Germany, instead of the other way around. Germany is already leading the European superpower economically. Soon the Germans will lead them militarily. So we can surely see how the German people think is supremely critical!

Now we have a famous historian, Jörg Friedrich, helping to revive the same Nazi spirit of World War ii. He says America and Britain were just as evil as the Germans were in World War ii—as we defended ourselves from Nazi extermination!

The Nazi spirit is very much alive in Germany. It’s time we woke up. Our leaders are asleep and virtually unaware of the deadliest danger in this world!

How concerned should we be about what’s going on in Europe? As I said, I think Angela Merkel’s address in the Knesset was a moment of greatness for her. But her view will not prevail in Europe. I know that because of Bible prophecy. (To understand more, request your free copy of Germany and the Holy Roman Empire.) God says a much different view will prevail.

It will culminate in Europe’s new Charlemagne.

The Pope’s Standoff With Islam

Another recent development in the Vatican highlights the escalating tension between Catholicism and Islam. At his Easter vigil service on March 22, Pope Benedict baptized Magdi Allam, a former Muslim. Allam is a deputy editor of one of Italy’s most powerful newspapers, and he’s also a bestselling author.

Stratfor wrote this about the much-publicized baptism: “Allam is an Egyptian-born convert from Islam to Christianity, and is a prominent outspoken critic of radical Islamism” (March 24). The timing of the baptism was especially significant, as Stratfor went on to point out: “Only days before, on March 19, an Internet posting of an audio message purporting to be from al Qaeda leader Osama bin Laden accused the pope specifically of fomenting a ‘new crusade’ against Islam.”

In fact, a new crusade will happen.

Stratfor wrote, “The papacy is a unique geopolitical entity. It was once literally a kingmaker, crowning the rulers of the Holy Roman Empire.” And it’s going to crown another one, who will be the last one.

Soon after that, Jesus Christ will return and establish God’s government over all the Earth. God will save mankind from itself, but He will do it His way and according to His timetable. Today, your Bible says, the whole world is deceived (Revelation 12:9). But when Christ returns, He will remove that veil of deception and lead the world in the right way to live.

Before that, however, God prophesies in Daniel 11:40 of a great end-time clash between the king of the north (the EU dominated by Germany and the Vatican) and the king of the south (radical Islam). Even now, we are seeing this spectacular clash in its preliminary stages. (For more on this, request our free booklet The King of the South.) Prophecy is being fulfilled. You can know where all of these events are leading!

Stratfor continued, “In attempting to galvanize and energize 1 billion Catholics, Benedict might also further alienate 1 billion Muslims.” A superpower is rising in Europe. It will soon impact this world and shed blood as no church-state combine ever has. “[I]t could very well move the Vatican onto center stage in radical Islamism’s conflict with the West. And that can have profound geopolitical implications” (ibid.). Yes, indeed!

Now to prophecy. Revelation 17:10 says, “And there are seven kings: five are fallen, and one is, and the other is not yet come; and when he cometh, he must continue a short space.” The “one is” emerged during World War ii as the Hitler-led Axis power. God says one more resurrection of the Holy Roman Empire is coming.

It will be led by the new Charlemagne.

After that, the Messiah will return! Jesus Christ has to return. He said in Matthew 24 that if He didn’t, there would be no flesh saved alive! He must return to save us from ourselves! In this evil world, we love to exterminate people, it seems. God will put a stop to that forever.

The events we see today in Europe are tied directly to the return of Jesus Christ. This new Charlemagne will come on the scene and this will ultimately lead to the most wonderful, exciting, thrilling event that has ever happened on Earth!