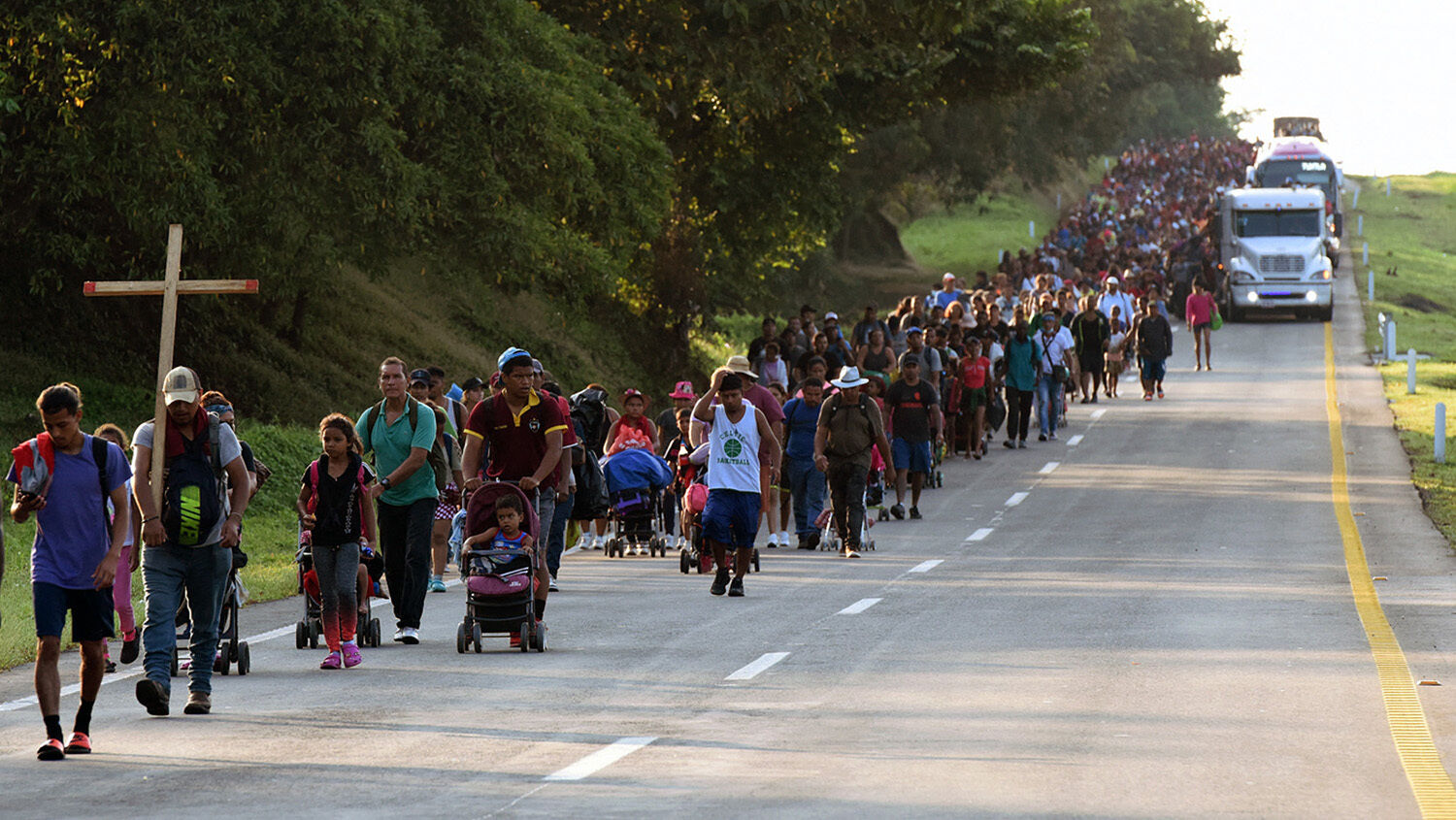 Joe Biden is creating the worst migrant crisis in American history. Since Biden took office 18 months ago, nearly 5 million illegal aliens have crossed the United States’ borders. Yet radical Democrats still refuse to increase border security. Instead, they are encouraging more aliens to come by rescinding Title 42, a Donald Trump-era public health measure allowing the federal government to deport illegal aliens from countries with potent infectious diseases, such as covid-19.

“Roughly the equivalent of the entire population of Ireland has illegally entered the United States in the 18 months President Biden has been in office, with many being released into American communities,” said Dan Stein, the president of the Federation for American Immigration Reform, in an official statement on August 16. “In that time, the Biden administration has blamed an unprecedented surge of illegal immigration on all sorts of external factors, except their own sabotage of our nation’s immigration laws. The endless flow of illegal aliens and the incursion of lethal narcotics pouring across our border will not end until this administration demonstrates a willingness to enforce our laws.”

One Yale University study has estimated that there are already between 16 million and 29 million illegal aliens in the United States. And it looks like the Biden administration wants millions more. Many analysts think demographic shifts caused by unlawful immigration could turn Texas into a Democratic stronghold by the 2024 presidential election. That would mean no Republican would ever win a future presidential election. Democrats would be able to transform the U.S. into a socialist state simply by nixing voter ID laws that require people to prove they are citizens before voting.

“This is an orchestrated Communist assault on America, to destroy America’s borders, to create confusion in America, to overwhelm the system politically,” Trevor Loudon, a communism expert, told the Epoch Times. “You can see what 15, 16, 20, 25 million new Democratic voters are going to do to this country. You will lose Texas; you’ll lose Florida; you will lose Georgia, Arizona and North Carolina. There will never be, ever, another Republican or conservative president in our lifetimes. You will have a one-party state in America. And that is the plan. That is why they are doing this.”

The radical Obama-Biden administration is trying to get Americans to accept an authoritarian government by importing millions of illegal aliens used to living under authoritarian rule in their home countries. This should concern anyone who believes in Republican principles like the rule of law, separation of powers, equal protection and civil liberties. It is a tried-and-true strategy that past authoritarians have used to fundamentally transform nations.

In some ways, the Roman republic founded by Lucius Junius Brutus and Lucius Tarquinius Collatinus in 509 b.c. was similar to the American republic founded by George Washington, Thomas Jefferson, John Adams, Benjamin Franklin, Alexander Hamilton, John Jay and James Madison in 1776. Both republics began with the overthrow of a monarch. Both republics were built on a foundation of strong, stable families in which the father was the chief authority. Both republics believed that legislative, executive and judicial power should be separate. And both republics were destroyed by an influx of aliens who did not believe in the political values espoused by their new country’s founding fathers.

Some historians debate the historicity of Lucius Junius Brutus and Lucius Tarquinius Collatinus, but the fact that the early Roman republic was trenchantly against monarchs is undeniable. The ancient Assyrians and Babylonians believed their kings were the vicars of their principal deity. The ancient Egyptians went further, thinking their pharaohs were deities themselves. But Greece and Rome were different. The Greek and Latin tribes that dominated the Italian Peninsula in the fifth century b.c. believed in government by the consent of the governed. They took great pains to ensure that all citizens could vote. Yet things began to change after the last king of Pergamum’s royal line died in 133 b.c. without an heir and bequeathed his kingdom to the rising Roman republic.

After Rome annexed Asia Minor, Latin senators started buying Anatolian slaves and hiring Anatolian servants to work their vast crop plantations. These foreign workers pushed native Latins off their land and into the provinces, contributing to a demographic shift on the Italian Peninsula. This shift became more pronounced after General Pompey the Great conquered what remained of the Seleucid Empire. So many Arameans, Armenians, Chaldeans, Edomites, Jews, Phoenicians, Samaritans and Syrians relocated to the Italian Peninsula that the Latins became a minority in their own country.

In fact, change of ethnicity occurred in Italy between the third century b.c. and the third century a.d. By the time Emperor Aurelian made the Syrian sun god Sol Invictus an official Roman deity, Rome was no longer an Indo-European society. Chaldean, Phoenician and Syrian peoples had largely replaced original Latins and transformed Italy into a Shemitic country. This often overlooked fact explains why the temperament of the early Romans was so different from the Italians of Constantine’s time.

“This Orientalization of Rome’s populace has a more important bearing than is usually accorded it upon the larger question of why the spirit and acts of imperial Rome are totally different from those of the republic,” wrote Prof. T. Frank of John Hopkins University. “There was a complete change in the temperament! There is today a healthy activity in the study of the economic factors that contributed to Rome’s decline. But what lay behind and constantly reacted upon all such causes of Rome’s disintegration was, after all, to a considerable extent, the fact that the people who had built Rome had given way to a different race” (American Historical Review, Vol. 21, July 1916).

The Latins were a fiercely independent people whom the Jews associated with Japheth’s grandson Kittim (Daniel 11:30). After these Latins banished King Tarquin the Proud, they vowed never to be ruled by kings again. Yet five centuries later, they began worshiping their Caesars like the Babylonians worshiped their kings. Many people puzzle over this dramatic change. Yet the answer to this change in intellectual outlook and spiritual ethos is obvious. The Romans worshiped their rulers like the Babylonians after mass immigration transformed them into literal Babylonians (Revelation 17:9).

For this very reason, many of the ancient caesars undoubtedly encouraged Babylonian immigration into Rome. Suppose you want to transform a republic fundamentally. There are few better ways to do it than encouraging mass immigration from a region of the world where people think the way you want your people to think. The Roman caesars understood this, and the radical left understands this. Barack Obama made an executive decree to grant amnesty to 4.7 million illegal aliens in 2014, and Biden is allowing millions of new illegal aliens into the country today. American leaders are not creating a migrant crisis to teach Latin Americans about republican principles. They are creating a migrant crisis to force conservative Americans to accept socialist principles.

Trumpet editor in chief Gerald Flurry makes this point in America Under Attack. “So many of the evils plaguing America today trace back to the mid-1980s,” he writes. “Today, many people recognize the immense threat posed by illegal immigration and the fact that radical leftists are actively fighting to change the country by it. This demographic transformation of the country’s population has been underway for more than a generation. In fact, it began with the 1986 Immigration Reform and Control Act, which granted amnesty to millions of illegal immigrants and liberalized America’s immigration laws.”

The migrant crisis on America’s southern border is an attempt by radical Communists to transform America into a socialist nation ruled over by an American caesar. Yet despite this caesar’s best attempts to transform America, Bible prophecy shows that he will only end up weakening America to the point where it can be conquered by modern-day Chaldean invaders (Habakkuk 1:6-8).

The only way to avoid this sobering fate is for Americans to repent of the sins that allowed a cabal of radicals to hijack their nation and return to the biblical principles that make nations great.

For a more detailed exposé on how a mass immigration crisis changed ancient Rome’s attitude and temperament, please read our article “Why Rome Never Fell.”