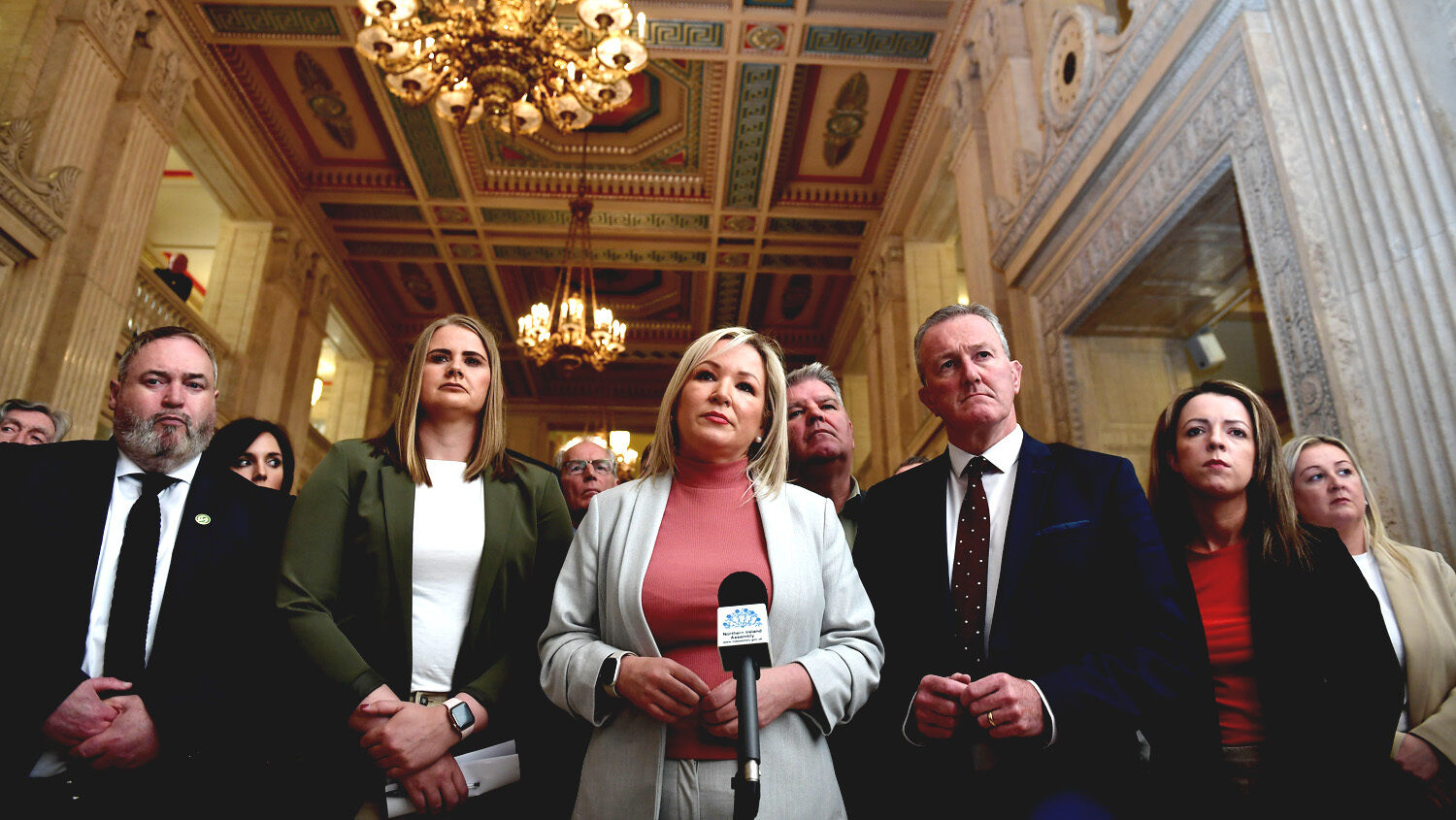 A time of intense punishment is coming for England and its colonies.

The results of a Northern Ireland Life and Times Survey found that 63 percent of respondents believed Brexit made a united Ireland more likely. Yet Irish nationalists will have to wait a few decades if they want to establish a United Irish Republic peacefully. And many of them are not patient enough for that.

The neo-Marxist Sinn Féin party emerged as Northern Ireland’s largest political party in a May 5 election. Yet despite the fact that Sinn Féin is associated with the Irish Republican Army (a terrorist group), some leftists feel the party is too moderate in its fight for a Socialist Republic of Ireland.

“The most recent British election in the Occupied Six Counties indeed witnessed the island’s largest Constitutional Nationalist party emerging victorious, but rather than it being a result of their ‘hard work’ and the people wishing to see this ‘real genuine change’ they so often speak about, the reality is that a split within unionism is the cause of this,” Paddy Gallagher from the radical Saoradh party told Newsweek. “They didn’t gain any extra seats. Unionism lost seats to so-called ‘middle-ground’ parties.”

Yet Gallagher was still hopeful that Brexit would “add further to the instability in the Occupied Six Counties and possibly lead to Irish unification.” He reasserted his position that “Republicans have for generations asserted the Irish people’s right to freedom and sovereignty through arms, and Saoradh have not condemned anyone for this, nor will we.” These statements are a threat to peace in Ireland.

Saoradh may be a small political party with only around 100 activists, but there are other militant nationalist groups in the region and it has been less than a generation since Ireland was marred by widespread sectarian violence. More than 3,500 people were killed and more than 47,500 people were injured in armed conflict between Catholic nationalist and Protestant Unions from 1968 to 1998. This time is still referred to as “The Troubles,” and it only ended when a treaty called the Good Friday Agreement was struck between Britain and Ireland. Yet a number of Marxist radicals want to use Brexit as an excuse to resume armed conflict over the six counties that comprise Northern Ireland.

Only time will tell if “The Troubles” will resume, yet Bible prophecy shows violence will intensify.

In his most popular book The United States and Britain in Prophecy, the late Herbert W. Armstrong noted how the biblical patriarch Jacob prophesied what would befall the descendants of each of his 12 sons in the end time. Regarding his son Dan, Jacob said, “Dan shall be a serpent by the way, an adder in the path, that biteth the horse heels, so that his rider shall fall backward” (Genesis 49:17). Mr. Armstrong explained that the phrase “Dan shall be a serpent by the way ….” can also be rendered “Dan shall be a serpent’s trail.” This meant that the Danites would set up waymarks by which their descendants could be tracked like a scout tracks a snake through an arid region by the trail it leaves behind in the sand.

“The tribe of Dan occupied two different districts, or provinces, in the Holy Land before the Assyrian captivity,” Mr. Armstrong wrote. “One colony lived on the seacoast of Palestine. They were principally seamen, and it is recorded Dan abode in ships (Judges 5:17). When Assyria captured Israel, these Danites struck out in their ships and sailed west through the Mediterranean and north to Ireland. … Irish annals and history show that the new settlers of Ireland, at just this time, were the ‘Tuatha dé Dananns,’ which means, translated, ‘tribe of Dan.’ Sometimes the same appears simply as ‘Tuathe De,’ meaning the ‘people of God.’ And in Ireland we find they left these ‘waymarks’: Dans-Laugh, Dan-Sower, Dun-dalk, Dun-drum, Don-egal Bay, Don-egal City, Dun-gloe, Din-gle, Dunsmor (meaning ‘more Dans’). Moreover, the name Dunn in the Irish language means the same as Dan in the Hebrew: judge.”

But how will Dan’s bite cause the rider to fall backward?

The May 1996 Philadelphia Trumpet explained that “this scriptural analogy which becomes clear as we study this ‘arrow snake’ which was once commonly sighted in the Middle East. This reptile was noted for its ability to hide in ruts and holes in the road or ‘by the way.’ It would remain concealed in such positions, then suddenly leap out and strike its prey. With horse-born wayfarers, the arrow-snake could strike with lightning swiftness at the horses hocks. The startled animal would often rear in fright, tossing its rider backwards to the road. This character trait of Dan shows their adeptness at adopting cunning and deceit as their strengths in attack. Classic guerrilla tactics!”

The strife between Ireland and England today is strife between the tribe of Dan and the tribe of Joseph. Therefore Jacob’s prophecy at least indicates that guerrilla warfare over Northern Ireland could be the attack that breaks the United Kingdom back into its primary constituent pieces: Ireland, Scotland and England. Other prophecies, such as the one in Jeremiah 31:15, show Jacob’s wife Rachel metaphorically weeping for her children (Joseph and Benjamin) because their punishment is so severe after they turn away from God and His laws. Many Benjamites later merged with the tribe of Judah (1 Kings 12:21), so Rachel’s children today are primarily the United States, Britain and the Jewish nation in the Middle East. The Bible shows that a time of intense punishment is coming on these three nations in particular, and terrorism in Ireland is certainly part of this punishment!

For more information about Britain’s downfall, request a free copy of The United States and Britain in Prophecy and read our special issue of the Philadelphia Trumpet: “The Fall of the English-Speaking Peoples.”