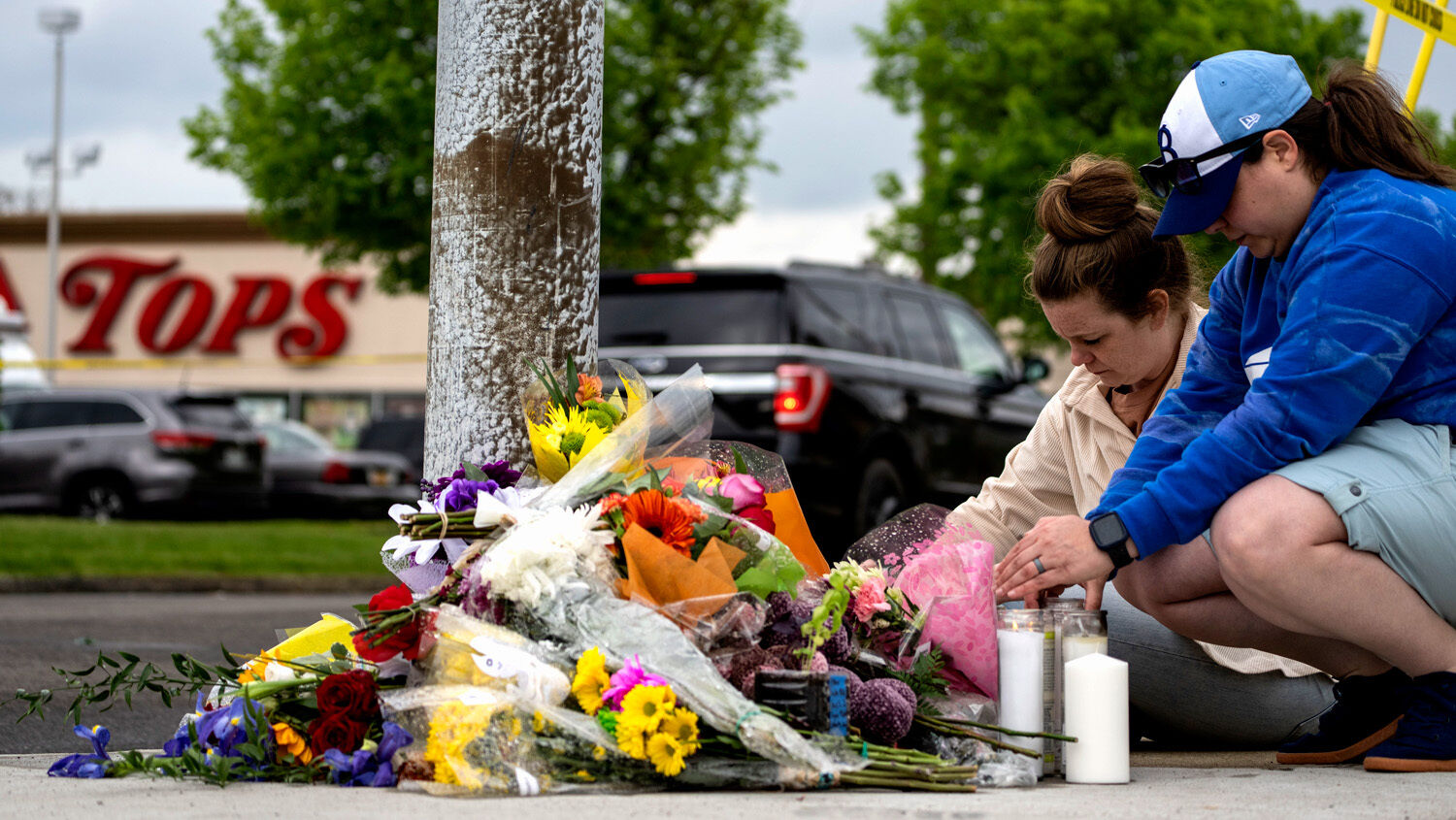 Mourners lay flowers on May 16 near the scene of a mass shooting at Tops Friendly Market in Buffalo, New York.
Kent Nishimura / Los Angeles Times via Getty Images

Most Americans dislike how Joe Biden is handling illegal immigration, so the corporate media is doing everything it can to make them look like extremists.

After a deranged white supremacist murdered 10 people at a supermarket in Buffalo, New York, the media instantly blamed Fox News host Tucker Carlson for inspiring the massacre. Payton Gendron’s online manifesto never mentioned Carlson, nor is there any proof that he ever watched an episode of Tucker Carlson Tonight. In fact, the 18-year-old gunman wrote that he was an eco-fascist who believed Fox News was part of a Jewish conspiracy to replace white Americans with nonwhites from Third World countries. Yet apparently, statements against nonwhite immigrants were all the media needed to slander Carlson as a violent extremist for daring to talk about an unprecedented surge of illegal immigrants at America’s southern border.

Yet while Carlson may talk about the dangers posed by unvetted immigrants, he rarely brings ethnicity into the conversation. It is primarily the left talking about the need to change the ethnic makeup of the nation.

It’s become something of a cliché for Democratic strategists to say “demographics is destiny“ when they want to assert that a shrinking white population will render Republicans incapable of wielding political power much longer. That is the case Salon magazine made just after Barack Obama was elected the first time. In his article “A Permanent Democratic Majority?”, Alex Koppelman noted that increasing the number of Hispanics could create a permanent Democratic majority and land a Democrat in the White House every election.

A few years later, the Center for American Progress backed up Salon’s position, noting that “real immigration reform that contains a pathway to citizenship for our nation’s 11 million undocumented immigrants is the only way to maintain electoral strength in the future.” President Obama agreed with this sentiment and told Vox editor Ezra Klein that he was optimistic that rising immigration rates would drown out conservatism. This optimism undoubtedly had some effect on his decision to implement programs that shielded hundreds of thousands of illegal immigrants from deportation. These actions are not part of a Jewish plot against Aryans like some eco-fascists think, but they are part of a socialist strategy to undermine the United States Constitution.

Opinion polls routinely show that about 55 percent of Americans disapprove of how Joe Biden is handling illegal immigration and would like the U.S. to have secure borders. The vast majority of these Americans are not racist; they just want to make sure migrants are properly vetted before they come to this nation. Otherwise, there is a risk that they will bring the socialist values that destroyed their old country into their new one. But since this is what the radical left wants, they slur anyone in favor of secure borders as a potential murderer.

In ancient times, people understood that an open border was a bad thing. That is why God promised to punish the ancient Israelites by making their “high and fenced walls come down” if they turned away from His law (Deuteronomy 28:52). Yet today, many of America’s leaders actually want to tear down America’s border walls and encourage as many illegals to come as possible so they can build a permanent Democratic majority.

In The United States and Britain in Prophecy, the late Herbert W. Armstrong showed how the Anglo-Saxon peoples are descended from the Israelite tribes of Manasseh and Ephraim. This means Bible prophecies about Manasseh and Ephraim are actually about the U.S. and British Commonwealth today.

One such prophecy is found in Hosea. “Ephraim allows himself to be mixed up with foreigners; Ephraim has become a cake unturned as it was baked. Foreigners eat away his strength, unknown to him; grey hairs are on him here and there, unknown to him. Israel’s pride shall confront and convict them; yet they will not come back to the Eternal their God, nor seek him, in spite of it all” (Hosea 7:8-10; Moffatt translation).

Hosea often refers to the northern 10 tribes of Israel, which split away from the kingdom of Judah, as “Ephraim,” the most prominent tribe, and “Samaria,” the capital. Yet the prophecies of Hosea were spoken to Ephraim and Manasseh jointly when King Jeroboam ii ruled both tribes. So this passage is about a time when both Britain and America are plagued with social problems associated with out-of-control immigration.

These nations are mixing themselves with illegal immigrants who have no intention of adopting their laws or assimilating into their culture. And the results are rising crime, drug trafficking and cultural clashes. What Payton Gendron did was horrendous, but that does not mean we should embrace Biden’s border catastrophe.

“It is time for the American people to wake up!” wrote Trumpet editor in chief Gerald Flurry in his 2017 reprint article “Communism in America Today.” “Or is it already too late? The Prophet Hosea says that we allow ourselves ‘to be mixed up with foreigners. … Foreigners eat away his strength unknown to him (Hosea 7:8-9; Moffatt translation). Foreigners are eating away America’s strength, yet we don’t even realize it because we have forsaken God. It is amazing how few people will really talk about what is happening.”

There are some media outlets reporting the surge of migrants pouring across the border, but America’s leaders are so senseless that they are deliberately abetting this crisis and attacking those who talk about it.

For information on where the migrant crisis is leading America, read Great Again, by Gerald Flurry.