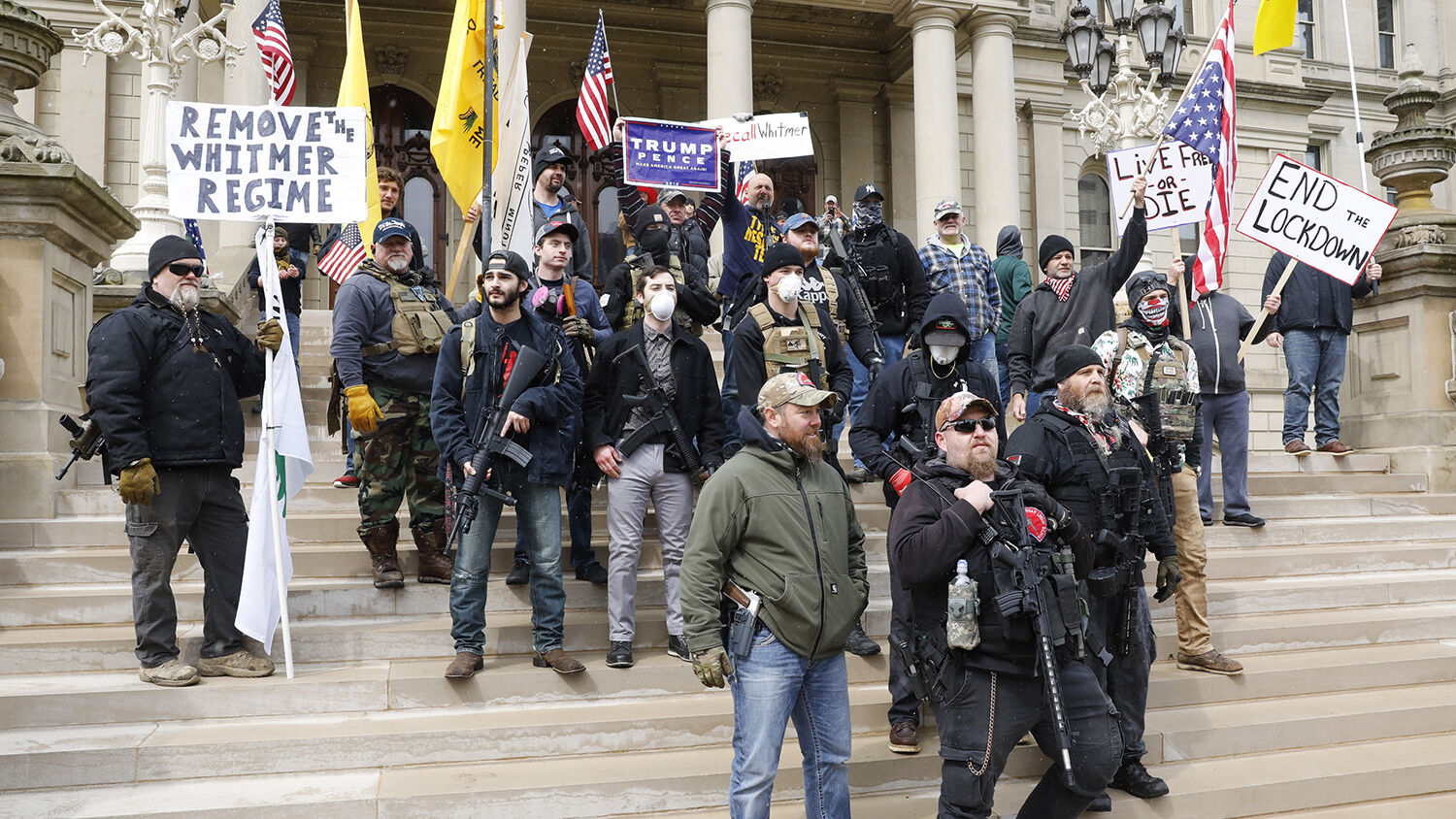 People take part in a protest for “Michiganders Against Excessive Quarantine” at the Michigan State Capitol in Lansing on April 15.
JEFF KOWALSKY/AFP via Getty Images

When people stop trusting government officials to uphold the rule of law, they start preparing to defend themselves.

Thousands of Michiganders gathered at the state capitol on April 15 to protest Gov. Gretchen Whitmer’s stay-at-home order. The “Stay Home, Stay Safe” executive order was signed on March 23 and directs all non-critical businesses to temporarily close and all Michiganders to stay six feet away from others during the covid-19 crisis. The lockdown has driven over a million people onto government unemployment rolls and pushed the state into a recession.

In response to this economic meltdown, the Michigan Conservative Coalition organized Operation Gridlock, a mass protest that created a bumper-to-bumper traffic jam around the Michigan Capitol Building.

Operation Gridlock officially started at noon with a huge number of participants in vehicles honking horns, waving American flags, and circling the capitol building. A group of men from the Michigan Liberty Militia also attended the protests, carrying rifles and patrolling the sidewalks outside the capitol.

“We’re here to make sure everybody has the right to assemble peacefully,” one of the armed men told wxyz News.

Governor Whitmer said she was “disappointed” to see people not wearing masks at the demonstration, but the protest may have had an effect. The governors of Illinois, Indiana, Kentucky, Ohio, Michigan, Minnesota and Wisconsin made a joint announcement the day after the protest that they would be working in “close coordination” to reopen the economy.

Fox News senior judicial analyst Judge Andrew Napolitano has explained that forcibly quarantining the healthy without due process of law is an egregious violation of people’s civil liberties. Depriving people of these civil liberties is an attack on the very foundation of citizenship. When people stop trusting the government to respect their natural right to earn a living, they begin taking matters into their own hands.

Public trust in the government was near historic lows even before the covid-19 crisis, and government lockdowns have not helped the situation. This is a key reason why so many Americans are stockpiling toilet paper, hand sanitizer, bread, beans, sugar, chicken, respiratory masks, ammunition and guns. Like Operation Gridlock protesters, they do not trust the government to respect their civil rights, so they are preparing for the worst.

A breakdown in the rule of law is devastating to a nation.

Mexico is in the midst of a three-way civil war between criminal cartels, citizen militias and government troops. The United States is headed in the same direction if the nation at large continues to disregard the rule of law.

Americans purchased more guns last month than any other month since the Federal Bureau of Investigation began collecting data over 20 years ago. Meanwhile, federal agencies are spending over $150 million per year to stock up on .308-caliber rifles, night-vision goggles, propane cannons, liquid explosives, buckshot, drones, remote-control helicopters, thermal cameras and military-grade waterproof thermal infrared scopes. Federal bureaucracies do not stockpile such equipment unless it is anticipating urban warfare that local police would be unable or unwilling to handle.

It is clear that the U.S. government does not expect citizens to remain peaceful in the future, just like citizens do not trust the government to avoid putting people under house arrest without a fair trial.

Government corruption and declining trust in its institutions are symptoms of a greater sickness in the nation. The Prophet Isaiah wrote about the spiritual sickness that besets a nation that turns away from God.

Blasphemy, corruption, covetousness, family breakdown, hatred, idolatry, murder, sexual sins and thievery have consumed America. People have abandoned personal responsibility and biblical morality. They have embraced selfish individualism, social welfare and materialism. As a result, they look to the government to provide, instead of relying on God. By delegating more and more power to the central authority of a human-run government, American citizens have created an administrative state with the power to confiscate the freedoms of those who oppose it.

“Never have we seen such hatred between American people,” wrote Trumpet editor in chief Gerald Flurry in “America Has Been ‘Fundamentally Transformed.’” “All this ought to terrify every American. Many revolutions end in a civil war filled with suffering and death. In America’s civil war, neither side will win. Bible prophecy thunders a deadly message that an enemy nation will conquer us. We must wake up and repent for God to save us this time.”

While millions of Americans may now be waking up to the threat this sprawling network of “deep state” departments presents to the nation, their populist revolution does not address the root causes behind this crisis. Corruption and bitter division in America today are leading to a conflict so devastating that the whole country will be laid desolate and its cities will burn with fire. These serious problems are not caused by one man or a group of government officials. Ultimately, they are caused by the sins of the American people as a whole. Only the repentance of the people can prevent the sickness in America’s government from escalating into full-scale revolution and war.

For a deeper understanding of the spiritual dimension to America’s decline, read “America Has Been ‘Fundamentally Transformed,’” by Gerald Flurry.