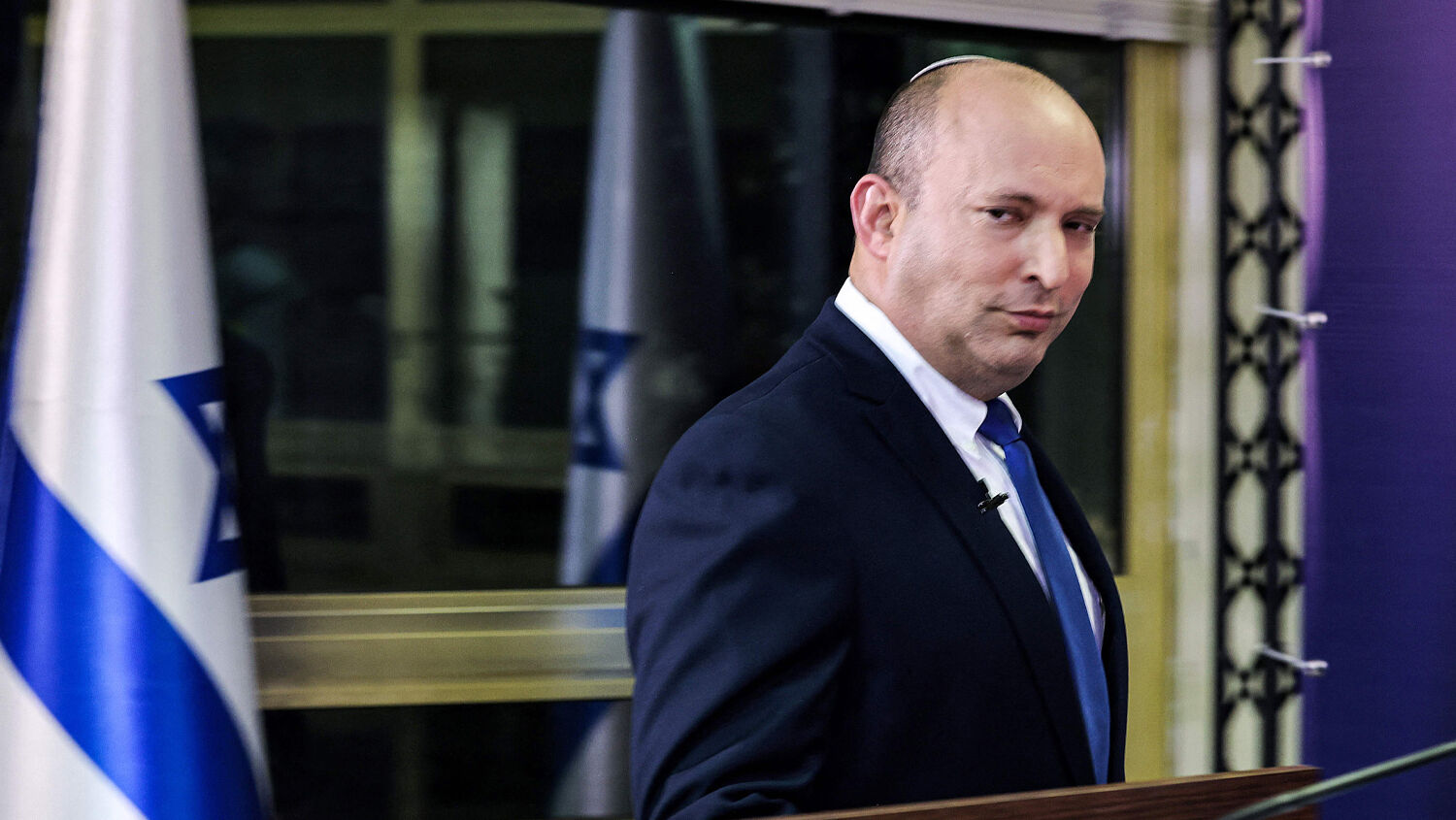 A man who might not have made it to the Knesset is set to become prime minister.

jerusalem
If all goes according to plan, Israel will have a new government on Sunday. For the first time in 12 years, Benjamin Netanyahu will not be at its head. Instead, Naftali Bennett, a man whose party won just 6 percent of the vote in the March election, will be in charge.

Sunday’s confidence vote in the Knesset will be the culmination of the multilayered campaign over the past two years to pull out all stops to remove Netanyahu from leading the Jewish state. A leftist-dominated media and educated class, anti-Netanyahu leaders from the left and right, as well as a politicized judiciary came together to wage war on Israel’s longest-serving and arguably most successful leader. They joined forces through four inconclusive elections in order to oust Netanyahu. And finally, they’ve done it—by all means possible.

Israel’s election cycles are typically a bitter mudslinging fest between politicians as they vie for the people’s vote. Then, after the vote is in, the politicians turn on each other to gain the most from the coalition-building process. This is routine for Israel.

However, the drama that led to Bennett’s crowning as prime minister is unparalleled in Israel’s democracy.

Not only does the unity government contain eight separate parties from the left to right to Arab; not only was it formed with just one goal—to remove a single individual from power, an individual that is by far the most popular politician in Israel’s democracy; but this government only comes to power by cheating. Not cheating in the ballot box, but cheating the voters themselves.

This election was stolen from the voters of Israel.

Consider that the linchpin for this government is the Yamina Party, led by Naftali Bennett. In the election, Yamina only won 6 percent of the vote, yet it acts as the kingmaker for the government. If it joins forces with the Netanyahu block, Netanyahu retains the leadership of Israel. Or if it joins with the left, as has happened, Netanyahu is toast.

Having such a kingmaker is normal for Israel and most multi-party democracies across the globe. However, what is not normal is how this kingmaker (Bennett) lied to his own constituents to get their votes, and then after the election disavowed that position.

But after the election, Naftali Bennett betrayed his voters and sided with the left to rip the crown off Bibi’s head and put it on his own.

Based on after-election polling of Yamina voters, had Bennett declared his openness to side with the anti-Netanyahu bloc, he would have lost 60 percent of his vote.

Put simply, this means that had Naftali Bennett not lied to Israel, he would not be prime minister-designate. Instead, those voters would have flocked to the Netanyahu bloc, likely continuing his tenure in power.

Furthermore, had Bennett not lied to Israel, the Yamina party would likely not have received enough votes to clear the electoral threshold (3.5 percent). Meaning, that Naftali Bennett would not even be a member of the Knesset.

Instead, because of a lie, a man who probably wouldn’t have made the Knesset is now going to lead the Jewish state. This takes the adage “cheating your way to the top” to a whole new level.

If Bennett doesn’t lie before the election, Netanyahu most likely is still Prime Minister today.

Hence why Mr. Netanyahu called the arrangement the “greatest election fraud in Israeli history and in the history of democracies.” Also this week he said, “We are witnessing election deceit the likes of which has never happened. People feel—justifiably so—that they have been conned.”

All of this is true, and yet the media in Israel is giving the “big lie” a pass. Instead, they say those who would try to expose and overcome the attack on Israel’s democracy are insurrectionists. Indeed the media has help endorsing such a position from Israel’s security agency. On Saturday, Shin Bet Director Nadav Argaman condemned language that might be perceived as “one who endorses violent and illegal activities that could even lead to harming individuals.”

An example of Netanyahu’s so-called incitement to violence came in response to Argaman’s comments, stating, “Don’t be afraid to stick it to them. It is part of the scam. Do not be afraid to tell the truth.” Another media-obsessed example is a letter that was circulated by powerful rabbis throughout Israel. It read, “This government is completely contrary to the will of the people as expressed emphatically in the last election. Every effort must be made to prevent this government from being formed. It’s not too late.”

Stick it to them. Every effort. Figurative phrases like that are being trumpeted by Israel’s left-wing media and politicians as evidence that Netanyahu is trying to raise an actual violent insurrection against the results of the stolen election. In fact, if you even discuss the steal, you are labeled as a dangerous conspiracy theorist.

If any of this sounds eerily familiar, you aren’t alone in recognizing it.

While the deceitful means enacted to defraud democracy might be different in Israel and in the United States, the outcome and the narrative are almost identical. For years a left-wing, anti-traditional “deep state” has merged with mass media to degrade the Bible-based values and rich history of both America and Israel.

Both Benjamin Netanyahu and Donald Trump have recognized this attack and have fought back. It was the reason Mr. Trump was elected, and it was the reason Mr. Netanyahu remains the most popular leader in Israel. Unable to remove the leaders from power by simple popular vote, the radical left tried other means, from impeachment attempts to Russian collusion to an ongoing bogus legal case against Mr. Netanyahu.

Witnessing the strength of the attack from the radical left, both Trump and Netanyahu have spoken out with increasing boldness because they see what is at stake. Eventually, they were ousted from power through an illegal and undemocratic election process. Any attempt to rally support to expose the fraud has been called incitement to violence and insurrection.

All along, other conservative politicians failed to see the nature of the war. Whether it be the Republicans in Name Only or the right-wingers inside Bennett’s coalition, these conservatives bought into the left’s notion that this war was over the personality of Trump and Netanyahu. Not wanting to go down with what they see as a sinking ship, they joined the other side and become party to the left’s takedown.

And yet in both cases, regardless of all the lies and hysteria of the noisemaking media, a majority of the people themselves know they have been defrauded and continue to support the now-ousted leader.

And the nations are bitterly divided.

It is worth pondering whether it will be possible to heal the rifts brought by the radical left’s attempt to fundamentally change America and the State of Israel. Despite all their personal flaws, Mr. Netanyahu and Mr. Trump were attacked because they stand as beachheads against the assault on the biblical-based values upon which both countries stand.

Neither side benefits from such nation-destroying distrust. And both sides will blame each other as the cause of the ensuing chaos.

Considering that both nations are experiencing the same peril at the same time, is it possible that there is a similar cause? Trumpet editor in chief Gerald Flurry answers this question in his booklet America Under Attack (free upon request). As he explains, both the United States and the nation of Israel (as well as the British Commonwealth), are the descendants of the ancient Israelite tribes that once lived in the territory encompassing the limits of the Jewish state today.

As Bible prophecy proves, these tribes were to become separate powerful nations in the latter days (Hosea 5:5). The Bible also relates that these nations would experience unparalleled blessings based on the promises given to their ancient forefather Abraham. However, God’s promised gift of those blessings would eventually be replaced by curses caused by national disobedience. And weakened by lawlessness, the nations of Israel would open themselves up to bitter attack from the inside. Are we witnessing that inside attack right now?

In Israel, even at this late stage, there is still a slight chance that Benjamin Netanyahu will be able to turn things around before Sunday’s swearing-in. And in the United States, President Trump has predicted, and even Bible prophecy proves, that he will return to office, briefly. Mr. Flurry explained this prophecy in his latest article, “What Will Happen After Trump Regains Power.”

But even though this return to power will be with strength, it will not bring about a renaissance of law-keeping or fidelity to biblical morals. As such, it will not heal the wounds deeply dividing Americans or Israelis. Those cannot be solved by human means.

The Bible repeatedly warns to never put trust in a man, whether that be yourself or “princes,” such as Mr. Netanyahu or Mr. Trump (Psalm 146:3). These men have done a valiant job standing up to forces trying to destroy the end-time nations of Israel. However, the biblical instruction is to put your trust in God. Being grounded in the prophecies that describe God’s view on these events is the way to keep the right perspective. (A free subscription to our print magazine will help provide this.)

God doesn’t give prophecy only to foretell bad news, but rather to show how the present distress is leading to the Second Coming of Jesus Christ, when the violence, bitterness and lies will end.

Such lies pervade our nations today and are used to gain the very highest levels of power—that of presidents and prime ministers. And yet, even that was prophesied. The Prophet Isaiah said that when you see truth falling in the streets, where lies persevere and truth fails, then know that God sees it too—and even that will motivate Jesus Christ to return. Isaiah 59:15-16 state: “Yes, truth is gone, and anyone who renounces evil is attacked. The Lord looked and was displeased to find there was no justice. He was amazed to see that no one intervened to help the oppressed. So he himself stepped in to save them with his strong arm, and his justice sustained him” (New Living Translation).

To maintain your focus on these hope-filled prophecies in the midst of crisis, please request Gerald Flurry’s free booklet Isaiah’s End-Time Vision.