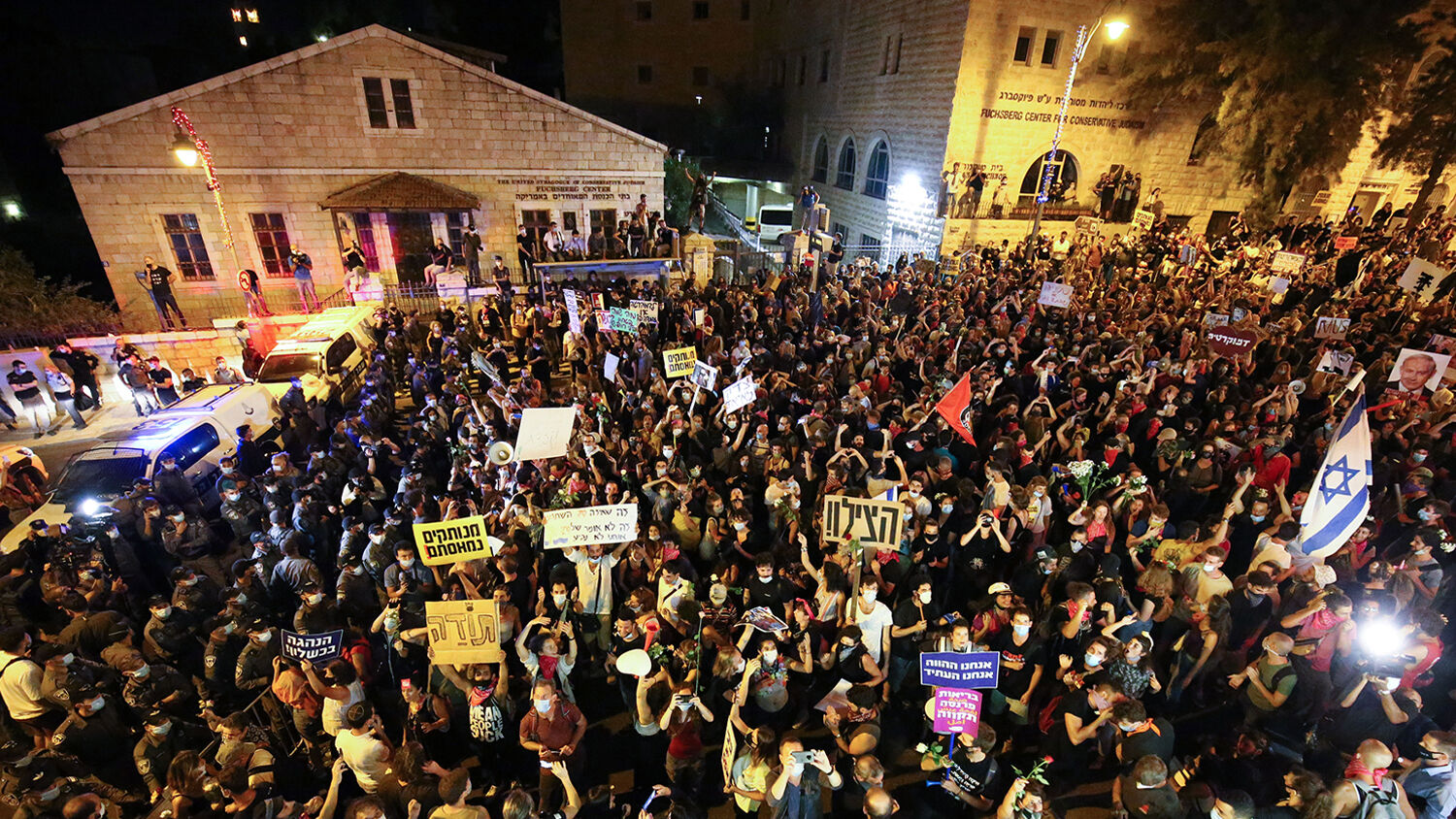 People gather to stage a protest against Israeli Prime Minister Benjamin Netanyahu’s indictment on corruption charges outside the Prime Minister’s office and managing the fighting the coronavirus.
Mostafa Alkharouf/Anadolu Agency via Getty Images

Violent protests have reached all the way to Jerusalem.

I can’t help but think Israel has taken a dangerous turn.

The past two Tuesday nights, Jerusalem has been rocked by demonstrations that turned violent. Thousands of people protested at Paris Square, a five-road junction in downtown Jerusalem, just 100 meters from the prime minister’s residence on Balfour Street.

This is a notorious gathering point in Israel’s history for protests or street parties, depending on the occasion.

Fourteen years ago, I lived in the apartment building overlooking this junction. As a 21-year-old newcomer to Israel, I felt right in the thick of it with the busy sounds of city life surrounding the apartment. Often my roommates and I would spend our evenings gazing down to the streets below.

Our fourth-story vantage point was the perfect spot to witness recurring protests against the prime minister—Ehud Olmert at the time. There was always plenty of shouting, megaphones blaring, lots of flag-waving, and more often than not, being Jerusalem, some international press ready to blow the protests way out of proportion in their reporting.

But there was one thing I never saw in those protests over a decade ago: violence.

On July 14, longtime reporter for Haaretz Nir Hasson was also on top of a building overlooking Paris Square. He described an altogether different scene:

By midnight, the square looked like a war zone. A recycling bin was on fire in the middle of the street. All the adjacent streets were blocked off by overturned trash cans ….

The police water cannon was shifting back and forth, clearing the hundreds of demonstrators from the streets with its powerful spray. Most of them took shelter behind cars or in courtyards, while others stood defiantly to bear the brunt of the water. Several people were injured, and some threw water bottles back at the cannons, but I did not see any stones thrown.

Three mounted policemen repeatedly charged at groups in the crowd, and in the center of it all, members of the Yasam Special Patrol Unit began carrying out mass arrests ….

By the end of the night, 50 people were arrested. A similar scene again played out this Tuesday night, with another 35 people taken by the police. According to Hasson, longtime Israeli reporters cannot recall such angry protests in Jerusalem.

The people have a mixed bag of grievances against Prime Minister Benjamin Netanyahu. Some were out to protest his plan to annex parts of the West Bank. Following United States President Donald Trump’s peace plan, Netanyahu is mapping out the areas that will be under Israel’s control, which the left views as a process of disenfranchising the Palestinian population.

Then there is the coronavirus.

Israel is currently experiencing a second wave of the virus, which has seen Netanyahu’s government reimpose restrictions on businesses and freedom of movement. Twenty percent of Israel is unemployed, with restaurateurs, service industry and tourist sector workers taking the brunt of the hit. The economic suffering from the government’s response has certainly contributed to bringing people to the streets.

Put together, these three issues have brought Mr. Netanyahu into the crosshairs of the protesters.

“We have one demand, which is that Netanyahu resign,” former Israeli Air Force Gen. Amir Haskel, one of the protests’ organizers, told Media Line last week. Haskel is happy to bring all these different interest groups together, stating, “We cooperate with all of these movements, and gladly.”

Certainly, in a democracy the people have a right to unite in a single peaceful protest against their leadership. However, the protests for the past two weeks haven’t been peaceful. In fact, it is increasingly difficult to reconcile the degree of anger, fury and hatred of those protesting with their stated causes. This is increasingly true given that it is now the younger people who are filling the streets.

Up until a few weeks ago, the protests against Netanyahu were largely comprised of middle-aged and older people, tired of a decade of Netanyahu’s rule. Over the past two weeks, however, young people are making up the bulk of the numbers.

“Tuesday’s demonstration was a turning point in the evolution of protests against Netanyahu. The protests had been sustained up until now by older demonstrations,” wrote Hasson. “On Tuesday, however, the protest baton was passed on to the younger generation, whose anger is of an entirely different kind.”

Hasson wasn’t alone in noting the shift in tone. “It was certainly not another run-of-the-mill demonstration,” noted Ynet, the second largest daily in Israel. Times of Israel founding editor David Horowitz said Israel is experiencing a “dangerous shift” in its democracy and facing “the most challenging domestic periods in modern Israeli history.” Israel Hayom headlined a piece, “The Smell of Political Violence Is in the Air.”

Almost across the board, the Israeli press blames the protests entirely on Netanyahu.

And yet, if we are honest, it’s hard to believe that the prime minister’s performance on handling the coronavirus can account for the vengeful nature of the demonstrations.

This is especially true if we consider the vicious protests taking place across the West, most notably in the United States and Britain.

In the U.S., violent protests and lawlessness, egged on by the press and left-wing political leaders, have flourished in recent weeks. Initiated by the death of an unarmed black man, protests have increasingly focused on downgrading then destroying America’s history and the defender of that history, President Trump. For some reason, England jumped on board with its own protest movement attacking law enforcement and tearing down statues of their champions of history.

And now, those violent mobs have reached Israel. And in Israel too, the desecration of historic state symbols has begun. On Tuesday night, at a protest outside the Knesset, a woman climbed above the massive menorah, a rendition of the seven-branched lampstand that used to grace the temple, and took off her shirt. While up there she waved red Antifa flags at the onlookers, most of which had no problem with the show.

Many recognize the simultaneous nature of the protests movement across these nations.

But for the Israeli press to link Israel’s protests to the others is to admit that the root cause behind them is not Prime Minister Netanyahu.

Only commentators outside of Israel’s radical left-wing bubble are free to make such comparisons. “Pictures of the protests do not show proud Israelis hurt by the coronavirus,” wrote Alex Traiman for the Jewish News Syndicate, “but anarchists seeking to destabilize Israel in the same manner that recent racial protests turned violent in the United States.”

Indeed, there are radical movements inside the U.S., Britain and now Israel that are seeking to tear down the nation. Those movements have been at work for years, undermining the Bible-based values systems and promoting lawlessness. And now, those radical movements are taking to the streets.

“Dictatorships are never toppled in the parliament or in the government. They’re toppled in the street,” stated protester Sadi Beni Shitrit at the July 14 protest. Then he followed with this shocking statement: “They can only shut me up in one way: with a bullet to the head. If that’s what it takes, I’m willing to pay that price.” Those are not the words of a citizen willing to compromise, but a potential martyr.

What is the end result of such uncompromising rhetoric? Many in Israel have begun to wonder.

“The heated nature of the protests and the violence shown here—towards state symbols as well—compounded by the radical remarks made by some toward Netanyahu personally, may indicate that we are on the brink of a slippery slope,” stated Doron Matza, a former senior officer with the Israel Security Agency.

Mr. Netanyahu too senses the danger. A day after the July 14 protests, he addressed the public (emphasis added):

I want you to understand: Israel is a free democracy. Freedom of expression and protest are reserved for every person and group, certainly in times of economic distress such as this. But the revolt … this is real danger. We cannot fall into gratuitous hatred we cannot fall into hating our brothers …. We cannot go there.

For many Israelis, the word revolt conjures up bygone eras, no doubt familiar to the prime minister. His father was a renowned historian who taught his children to have a deep respect for history and the lessons that can be learned from it.

One of the lessons from the First Jewish Revolt 2,000 years ago is that Jewish infighting precipitates national destruction.

In the case of the first revolt, it was the Jews collectively revolting against Roman rule. And yet, even with Roman armies besieging Jerusalem, the Jews couldn’t form a unified front. Thousands of Jews died at the hands of their brothers before the Romans even broke through Jerusalem’s city walls. Warren Reinsch wrote about this bitter lesson from the Great Revolt in our sister magazine Watch Jerusalem, and it would be worth your time to read.

The same forces at work in the Jewish state today are active in the other nations of biblical Israel as well. Generally speaking, if you find the countries that are working hard to destroy their history and are taking to the streets in revolt, you can discover the modern identity of Israel.

The increasingly hostile demonstrations taking place on our streets have historic precedent for our peoples. They are also a fulfillment of biblical prophecy. For more on where these protests will lead, please read Trumpet editor in chief Gerald Flurry’s cover story from our latest issue, “Race Riots Were Prophesied!