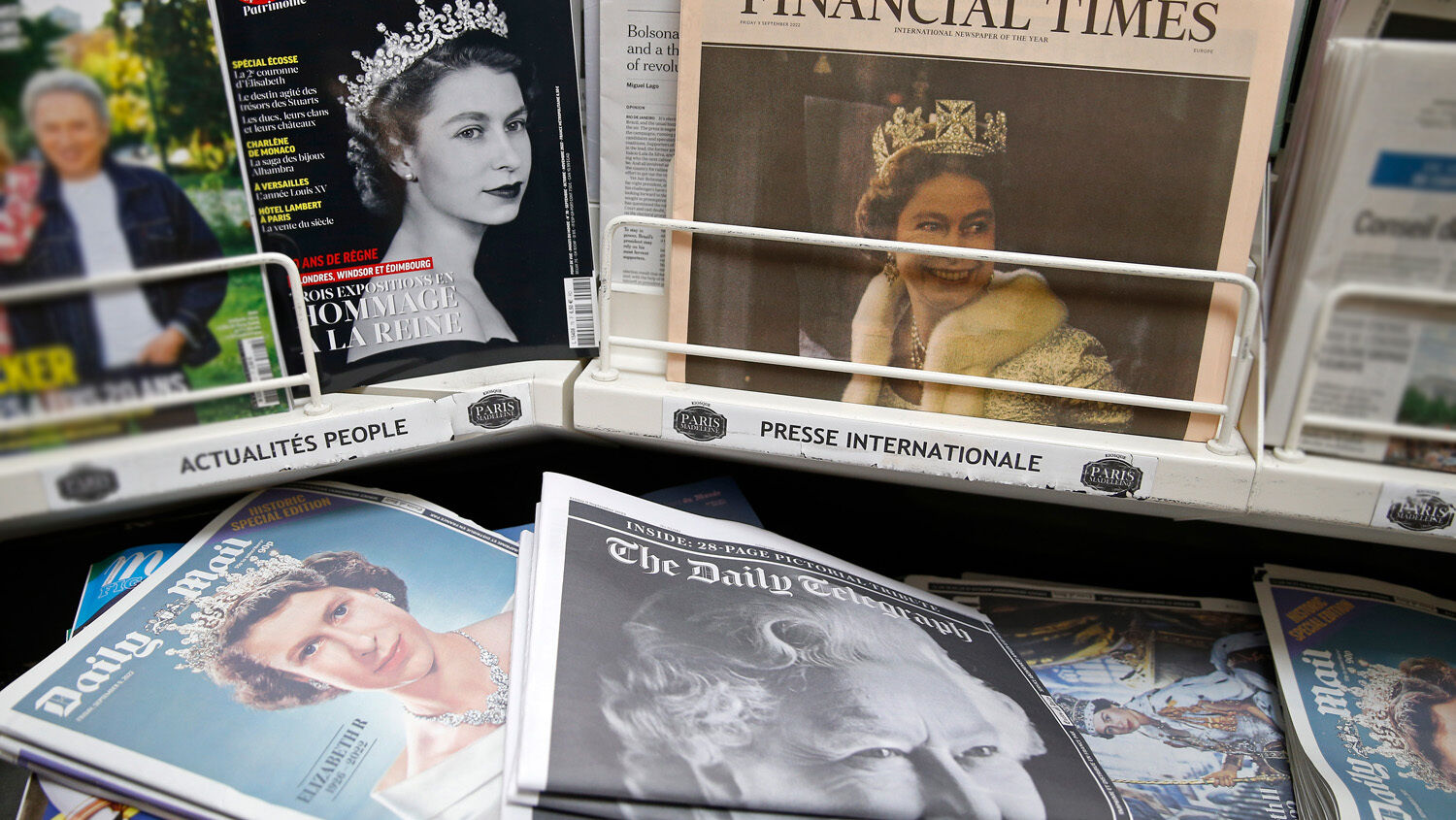 Newspapers in Paris, France, display photos of Queen Elizabeth ii on September 9, the day after the announcement of her death.
Chesnot/Getty Images

Media elites reveal more about themselves than about the Queen or her realm.

The death of Queen Elizabeth ii last week inspired a phenomenal outpouring of grieving, sympathy, nostalgia and gratitude from people worldwide. Scots, Englishmen and others came out in masses, filling streets in mannerly throngs to pay respect as her flag-draped casket passed by on the way to her palace, where innumerable blooms had been laid.

But at this historic and somber ending of an era, a small minority are responding very differently. They are yelling into their media megaphones every factual and fictitious ugliness they can think of regarding Britain and the Queen.

USA Today, for example, amplified the views of a third-place South African political party called the Economic Freedom Fighters, which stated: “We do not mourn the death of Elizabeth …. During her 70-year reign as Queen, she never once acknowledged the atrocities that her family inflicted on native people that Britain invaded across the world.” It also highlighted the accusation of Meghan Markle that the royal family held a racist attitude toward her child.

On Monday, Time commemorated the Queen’s death by telling readers that 18th-century Britain “was defended and strengthened by constant wars that expanded Britain’s empire and the slave trade and drove the Industrial Revolution. Fossil fuels and industrial metals were relentlessly extracted from the earth in Britain and its colonies, quietly unleashing a process of climate change …. The monarchy helped drive these revolutionary changes. As the most important among the corporate partners that made up the 18th-century British state, along with formidable aristocrats, financiers, contractors, charter companies and the Bank of England, it established, invested in, and protected slave trading and colonialism.”

Media executives, particularly in America, are advancing their agenda by poisoning the legacy of the Queen and her country. Their toxin of choice is gratuitous emphasis on the existence and evils of slavery.

Meanwhile, on the same day that Time published its spin, the International Labor Organization and the International Organization for Migration issued a report called “Global Estimates of Modern Slavery: Forced Labour and Forced Marriage.” These United Nations agencies studied how many people live “in situations of modern slavery on any given day, either forced to work against their will or in a marriage that they were forced into.”

And how many slaves exist in our modern society? A few thousand scattered across a handful of little-known dictatorships?

The correct answer is 50 million.

The report states about 1 out of every 150 people in the world is trapped in slavery that can last for years or a lifetime, and 1 in 4 slaves are suffering from “commercial sexual exploitation.” One out of five slaves are children. More than half of these children are being raped!

The number of slaves worldwide has grown by 10 million (a stunning 25 percent) in just the last five years. We commonly call it “human trafficking” or “commercial sexual exploitation,” but it is slavery, and it affects more people today than ever in human history—and it is spreading fast!

The head of the International Labor Organization, Guy Ryder, said, “It is shocking that the situation of modern slavery is not improving.”

Leftist politicians, academics and media executives at USA Today, Time and elsewhere talk eagerly about Queen Elizabeth supposedly aiding and abetting slavery. But what about the people and institutions and companies and nations that are actively contributing to the enslavement of 50 million people right now? Why don’t they paint our society with this brush? Why barely even report it?

The question then becomes, how much do they truly care about slavery at all?

In his latest Trumpet article, “Lincoln’s Fight for True Freedom,” editor in chief Gerald Flurry discussed Abraham Lincoln’s successful drive to eliminate slavery from the United States in pursuit of the ideal that “all men are created equal.” He described how people intensely criticize America for failing to live up to that ideal and for being unequal and racist today. They rail against America tolerating slavery, even after it spent 600,000 lives in large part to eradicate it and make it constitutionally illegal in the time of our great-great-great-great-grandparents, more than 150 years ago.

But what are they doing about the slavery going on right now?

We have our own formidable “corporate partners” investing in and protecting slave trading and oppression. As Mr. Flurry pointed out, the U.S. National Basketball Association, huge technology companies and other corporations make billions of dollars doing business with the Chinese Communist Party. And they pointedly, hypocritically, corruptly ignore and tolerate China’s ambitions for Taiwan, which the word “colonial” does not begin to describe. They even ignore and tolerate China’s absolutely barbaric forced labor and sexual enslavement of millions of Uyghurs!

These media elites are not really concerned about slavery. So what is motivating this unrelenting and perverse attack? People want to virtue-signal and feel righteous, enlightened and “woke.” But the real motivation for this attack goes far deeper. Its goal is not to bring down slavery and oppression—but to bring down America and Britain.

The notion that British colonialism was built on subjugating black and brown people, and that the monarchy enriched itself at the expense of its colonies, is provably absurd.

Did you know that the primary reason Britain expanded into Africa was to shut down the slave trade? African leaders were deeply involved in selling slaves: The British sought to provide an alternative to slavery. They wanted to gave them a way to trade in things, not people.

In his book Churchill’s Military Histories, Algis Valiunas writes, “The explorer John Speke, who discovered the source of the White Nile, found African misery so appalling that he exhorted his countrymen to do ‘nothing less than to regenerate Africa.’ The prey of Arab slave traders, and the subjects of brutal black tyrants, the tribesmen of Buganda (now Uganda) stood in need of British protection: ‘They require a government like ours in India; and without it, the slave trade will wipe them off the face of the Earth.’”

As it was throughout human history, slavery was rampant at this time. Slaves were being shipped to Portugal, France, the Netherlands, Spain, Brazil, Cuba, Jamaica and elsewhere throughout the Caribbean. It was a terribly profitable business, and Britain, which after the Napoleonic Wars ruled the waves, was set to profit most of all from it. But astonishingly, Britain outlawed the slave trade. It decided it was more interested in justice for all than in unrighteous mammon.

The British Empire not only stopped its subjects from trading slaves, but it worked to shut the practice down across the globe. It used diplomatic pressure to convince several other European nations to renounce it. It overcame opposition from other countries much less enthusiastic about giving up this very lucrative practice. It passed laws outlawing the practice within British colonies. It paid out billions of dollars in today’s money to free hundreds of thousands of slaves. It deployed the Royal Navy to patrol the waters off Africa’s west coast to go after slave ships that were still operating. When not at war, this was the Royal Navy’s primary commission.

The British Empire increasing engagement with Africa and beyond was not to expand slavery and exploitation—it was to abolish slavery. The book Heaven’s Command states, “The first monuments of Queen Victoria’s empire were monuments of liberty. The fight against slavery at its source would continue throughout the Victorian era, being a prime motive … of the great mid-century explorations.”

As Richard Palmer brought out in “The Real Reason Our Statues Are Under Attack,” “No other powers in the world have this kind of anti-slavery history.”

Far too often, these attacks by the left go unchallenged. People don’t know their history and will believe anything, especially if it has this pseudo-intellectual anticolonial flavor.

Our sick society is giving way to more and more lawlessness, violence, unbridled emotion and aggression, and satanic thinking. Those enslaved today—living outside of civilized life, beyond the margins, in the shadows—are being treated abominably. There are 50 million of them! And there will be more.

This should deeply concern us. It concerns God! Slavery is terrible, and God hates it! He doesn’t want anyone to have to endure slavery.

Many scriptures prophesy of God setting slaves free—loosing the bands of wickedness, undoing the heavy burdens, letting the oppressed go free, breaking every yoke—and bringing those who enslaved them to justice. He promises to do that when He sends His Son back to Earth.

The job of liberating the captives did, in fact, make impressive progress at the direction of the British monarchy and leadership. But that job will only be finished—globally—at the Second Coming of Jesus Christ. God speed that day.