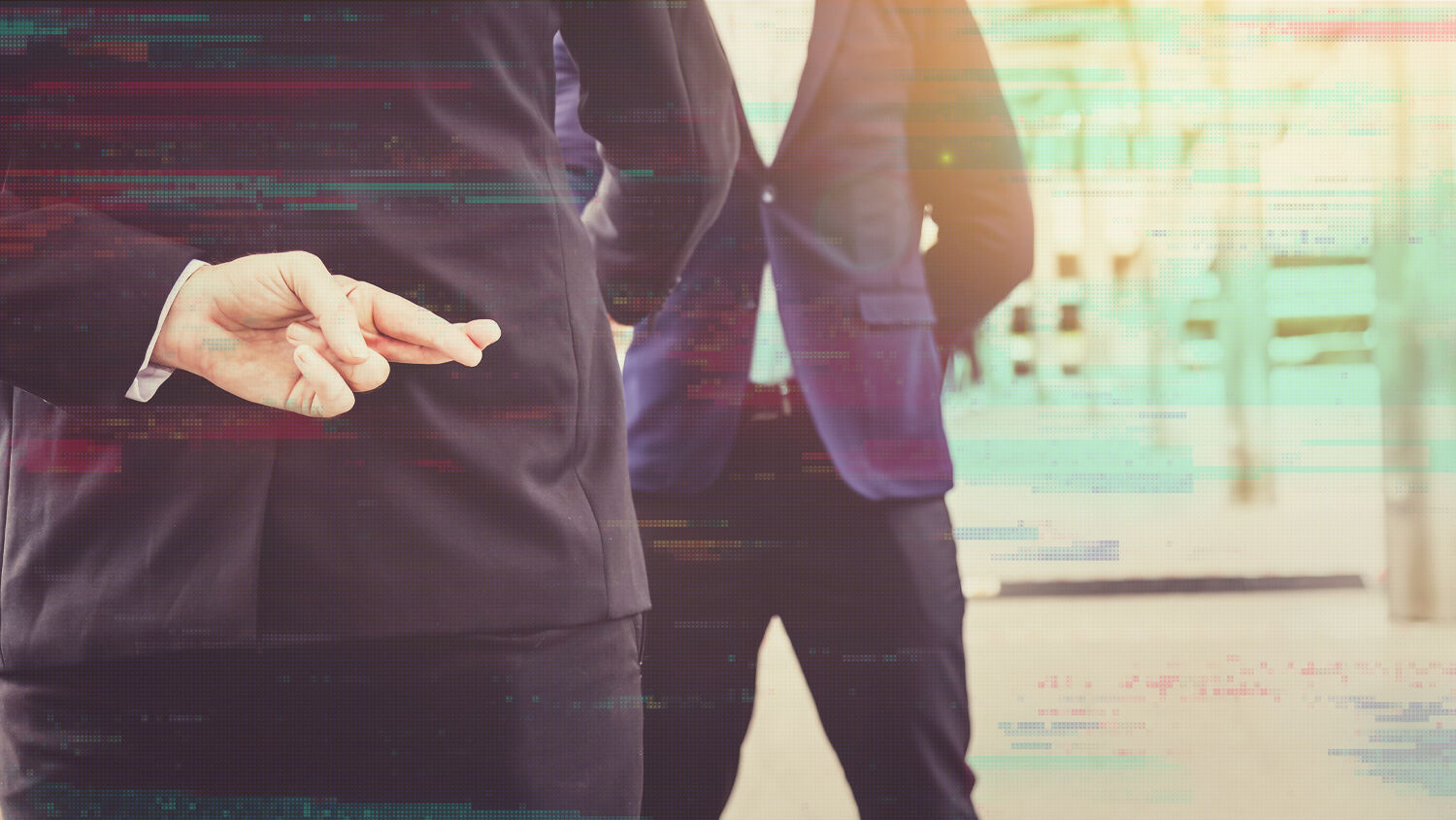 iStock.com/Love portrait and love the world

It’s not harmless and helpful: It’s mind-destroying and nation-destroying.

Lying is normal. Lying is necessary. Lying is not a problem if you know how to use it. If you really know what you are doing, you can even tell big, bold lies. We need lying to make things work: our marriages, our friendships, our business, our politics, our security, our international relations.

This is the standard attitude in our society. And it is a lie!

Look at the role of lying over just the past year with covid-19, with irregularities in America’s election last November, with truth and facts being censored by media and Big Tech, with leftist causes being promoted in spite of contrary facts. There is an epic amount of lying in the public sphere today. And in so many cases, life moves on; new headlines emerge and the truth is overwhelmed by deceit.

This is terribly destructive and dangerous to you and me and to our whole society.

The Prophet Jeremiah forecast the role of lying in our society. He said God would be amazed at the boldness of people’s sin: how they “cling tightly to their lies,” how they rush toward sin, how they are unashamed, how lying and other sins are routine, how people who weaponize lying “proceed from evil to evil.” He said God would be moved with sorrow and indignation by the boldness of people’s sin (see Jeremiah 8:4-12; 9:1-3). Read Jeremiah 9:4-5, see what happens in a society that accepts lying, and ask yourself if this sounds familiar: “Let everyone beware of his neighbor, and put no trust in any brother, for every brother is a deceiver, and every neighbor goes about as a slanderer. Everyone deceives his neighbor, and no one speaks the truth; they have taught their tongue to speak lies; they weary themselves committing iniquity” (English Standard Version).

The value we place on truth is central to our character. It’s the difference between thinking like God and thinking like the devil.

The God who inspired Jeremiah’s prophecy is the one, true, eternal Creator God. But this world is not God’s world. The societies humans have built are Satan’s societies. His influence permeates and dominates humanity. He is the god of this world, he has deceived the whole world, he is the father of lies, and there is no truth in him (2 Corinthians 4:4; Revelation 12:9; John 8:44).

His influence reaches into even the closest human relationship: One study has found that an average of 10 percent of communication between spouses is deceptive. Lying is so easy. In fact, if you don’t prize and exalt truth, you will easily slip into various subtle forms of deception without even thinking about it.

But even “small” lies that you seem to “get away with” cut you off from the God of truth! Humanity as a whole has indulged in lies and hypocrisies from the beginning and has plunged deeply into them in our lifetimes. And largely because of this sin, we are entering a period of terrifying darkness.

God’s communication is 100 percent truth. The Apostle Paul wrote that hope of eternal life itself is based on faith in something that “God, that cannot lie, promised before the world began” (Titus 1:1-2). Thank God He has set His will to never lie. Nothing can stop Him from keeping His word. Our hope in that is an anchor for our souls (Hebrews 6:18-19).

God’s nature has not even a shadow of deception (1 John 1:5). He wants us to walk in the light as well, with our words in perfect accordance with our deeds. Let sin in, let it spread, and you have a world where the average person lies every day as a way of life.

People almost always lie to try to benefit themselves. They lie to hide wrong things they have done; to avoid punishment; to lower the reputations of others, especially in comparison to their own; to raise their reputation, especially in comparison to others; to hide personal insecurities; to avoid an issue; to let an untrue statement go uncorrected; to receive more money than they would otherwise receive; to avoid telling people no or other things they don’t want to hear; to avoid hurting people’s feelings; to flatter.

But God forbids all lying with His Ninth Commandment: “Thou shalt not bear false witness against thy neighbour” (Exodus 20:16). Proverbs 6:16-19 show that God hates lying. It destroys relationships; it destroys character; it destroys people. Not just sometimes—every time.

Using our tongues to lie is a sin all of us have to battle. Adults learn to hide it somewhat, and it is often more obvious in children. Yet one study shows that children as young as 3 years old can commonly deceive adults without being detected. In fact, all children lie until caught! Parents need to be vigilant and prayerful to catch it and prevent that tendency from becoming a habit.

One of the most dangerous forms of lying is hypocrisy: pretending to be something you are not or to believe something you do not believe, especially regarding religion. This is a deceptive, self-destroying burden—from which God wants to free us! When we walk in the truth—not pretending to be something we are not, living completely free of deceit, having nothing to hide, living with integrity even when others aren’t looking—we give God the Father His greatest joy! (3 John 1-4).

Sam Harris is a neural scientist, an atheist and a prominent critic of religion. Disregarding religion and the Bible, he has written a book called Lying that evaluates this subject from his own narrow secular perspective. But his conclusions are quite interesting.

“Most forms of private vice and public evil are kindled and sustained by lies,” Harris writes. “Acts of adultery and other personal betrayals, financial fraud, government corruption—even murder and genocide—generally require an additional moral defect: a willingness to lie.”

But aren’t there some cases where lying works out for the best? “[E]very lie haunts our future,” Harris writes. “There is no telling when or how it might collide with reality, requiring further maintenance. The truth never needs to be tended in this way. … The liar must remember what he said, and to whom, and must take care to maintain his falsehoods in the future. … When you tell the truth, you have nothing to keep track of. The world itself becomes your memory ….”

Sounds a lot like what the God of truth reveals much more poetically in His Word: “Bread of deceit is sweet to a man; but afterwards his mouth shall be filled with gravel. … The lip of truth shall be established for ever: but a lying tongue is but for a moment. … For God shall bring every work into judgment, with every secret thing, whether it be good, or whether it be evil” (Proverbs 20:17; 12:19; Ecclesiastes 12:14).

Harris writes, “Lying is, almost by definition, a refusal to cooperate with others. … Research suggests that all forms of lying—including white lies meant to spare the feelings of others—are associated with poorer-quality relationships. … [T]he moment we consider our dishonesty from the point of view of those we lie to, we recognize that we would feel betrayed if the roles were reversed. … Every lie is a direct assault upon the autonomy of those we lie to.”

This is modern terminology for exactly what you will read throughout the Holy Bible, recorded by men without neural science backgrounds but inspired by the God who created the human brain and mind.

Harris relates an example of a “poorer-quality relationship”: a family in which the mother was diagnosed with multiple sclerosis. The doctor told her husband but lied to her. The husband lied by concealing the truth from her. She researched it herself, self-diagnosed, but concealed it from her husband. Her son found out accidentally a year later, and the other two children found out two years later. The family concealed it from the grandmother (and, therefore, all other friends and family members). One of the children said, “Rather than feeling grateful and protected, I felt sadness that we hadn’t come together as a family to face her illness and support each other,” and “I think she deprived herself of the opportunity to have a closer relationship with her mother.” Tragically true.

Yet surely there is some place for lying: For instance, being positive and building up someone’s self-esteem—right? “A lying tongue hateth those that are afflicted by it; and a flattering mouth worketh ruin” (Proverbs 26:28).

Harris writes that lying to friends—even with flattery—makes them ignorant to part of reality, harming them in ways we cannot anticipate and treating them like less than they deserve. “When we presume to lie for the benefit of others,” Harris writes, “we have decided that we are the best judges of how much they should understand about their own lives—about how they appear, their reputations, or their prospects in the world. This is an extraordinary stance to adopt toward other human beings.”

God does not command us to go out of our way to criticize others. Sometimes we should decline to share what we know (without giving the impression that we don’t know). But when asked for our opinion, we are disobeying God and actually hurting our friends and acquaintances when we pretend not to notice flaws. Help them by being loving and positive, but truthful.

Being truthful can lead to confrontation. In those situations, should we avoid confrontation or avoid truth? God commands in Ephesians 4:15, 25 that we must be “putting away lying” and “speaking the truth in love.”

Pretending not to notice someone making a bad decision or being self-destructive shows no love. A true friend is willing to deliver what the Bible calls a faithful wound (Proverbs 27:6). One paraphrase of Proverbs 24:26 states: “An honest answer is the sign of true friendship.” A couple of my closest friendships started with a difficult conversation over a point of disagreement or a personal problem. Willingness to confront a problem in love can actually open the door to genuine friendship based on sincerity and truth.

Anyone who avoids awkward conversation by lying to someone will fail to develop invaluable interpersonal skills and character traits, such as true tact, discretion, unfeigned politeness and patience.

“In committing to be honest with everyone, we commit to avoiding a wide range of long-term problems, but at the cost of occasional, short-term discomfort,” Harris writes. “However, the discomfort should not be exaggerated: You can be honest and kind, because your purpose in telling the truth is not to offend people: You simply want them to have the information you have, and would want to have if you were in their position.”

Proverbs 3:3-4 give us a simple, powerful antidote to what is wrecking our society and threatens our lives and the lives of our children. Believe, be grateful for, enjoy, and use the simple and powerful truth it communicates: “Let not mercy and truth forsake thee: bind them about thy neck; write them upon the table of thine heart: So shalt thou find favour and good understanding in the sight of God and man.”

Forsake the broad path of breezy deceit. Commit to the straight and narrow way of truth. Be someone who means what you say, whose word can be trusted, who walks what you talk, who praises but doesn’t flatter, who can deliver tactful, honest criticism, and who speaks the truth in love.