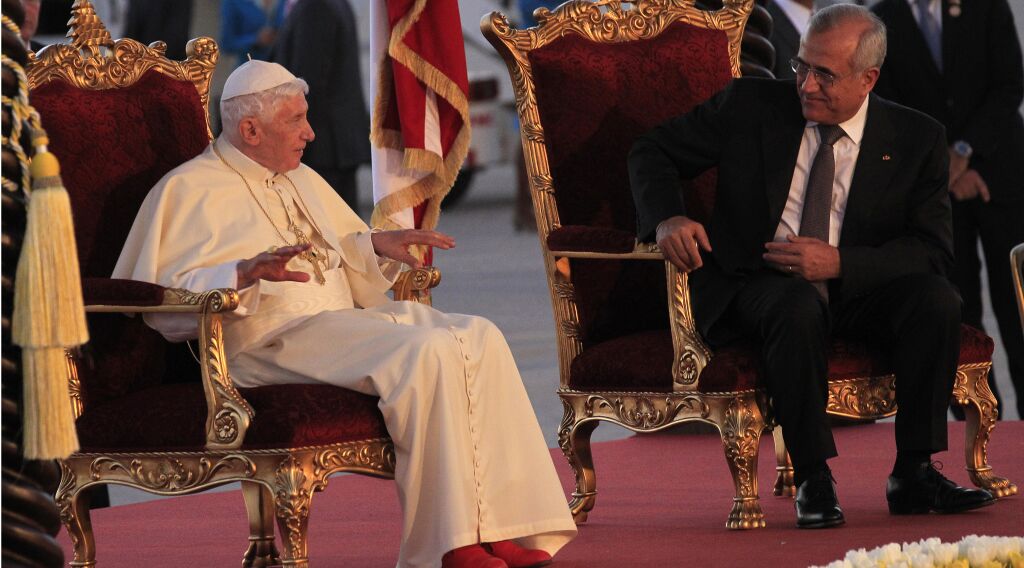 The Vatican and Lebanon appear unlikely allies, but the groundwork is being laid for a confederacy between them and other players.

Pope Benedict xvi arrived in Beirut, Lebanon, September 14 to meet with Lebanese leaders and to undertake what he called a “Pilgrimage of Peace.” The visit adds to a growing body of evidence proving that a new power bloc is quietly rising on the global stage.

The pope’s three-day visit came amid a backdrop of civil war in Syria and during a spate of uprisings throughout the Middle East—one of which resulted in the death of U.S. Ambassador Chris Stevens. Before Benedict’s visit, the Vatican had issued a toothless statement decrying not the Islamist attack on the U.S. Embassy and Stevens’s resulting death, but the provocations against the Islamic faith, which supposedly triggered the mob’s outrage. But the pope took on a different tone during his visit to Lebanon, sharply condemning the attack and saying that nothing justifies such acts of terrorism. The pope also addressed concerns about the plight of Christians in the Middle East.

Benedict is not the first pope to visit Lebanon. Paul vi made the first of such visits in 1964, and John Paul ii followed suit in 1997.

Evidence of a Biblically Prophesied Alliance

The Trumpet takes note when the Vatican and Lebanon begin to cozy up to one another because an alliance between the two was predicted some 3,000 years ago. Psalm 83 explains this end-time prophecy of Germany and the Vatican allying with Lebanon and other “moderate” Arab nations: “For they have consulted together with one consent: … The tabernacles of Edom, and the Ishmaelites; of Moab, and the Hagarenes; Gebal, and Ammon, and Amalek; the Philistines with the inhabitants of Tyre; Assur also is joined with them …” (verses 5-8).

Both Gebal and Tyre in this passage refer to the people of the modern-day nation of Lebanon, while Assur refers to Assyria, which is modern-day Germany. The Bible and history agree that when Germany goes forth to conquer, it does so under the guidance of the Roman Catholic Church. So, this Psalm 83 confederacy of nations is led by Germany, and Germany is steered by the Vatican. (Read Germany and the Holy Roman Empire for a complete understanding of the undeniable German-Vatican connection.)

The pope’s visit to Lebanon last month is certainly not the first sign showing that the groundwork of this alliance is being laid. For years, Berlin has been ramping up its trade relations with and political and military investment in nations like Lebanon, Saudi Arabia, Jordan, Turkey and the Gulf states.

The German-led European Union is the world’s largest exporter of weapons to Saudi Arabia—which is called the Ishmaelites in Psalm 83:6. Berlin has also been deploying its federal police to Riyadh to help the Saudis with border security and to train them to squelch uprisings. In June, Germany’s Bild am Sonntag also reported that Saudi Arabia is aiming to buy 600 to 800 of Germany’s Leopard battle tanks, more than twice the number previously expected.

Back in 2010, the emir of Kuwait toured Europe in order to develop closer relations with Berlin and the Roman Catholic Church. A Catholic official said his trip to the Vatican would allow the emir and the pope to strengthen the “relations that exist between the Holy See and Kuwait.”

In April of 2010, German industrial giant ThyssenKrupp concluded a major strategic arms deal with the United Arab Emirates. For the last 30 years, Germany has also been supplying Bahrain with an ever swelling quantity of armaments.

Our research into the origin of the nations leads us to the conclusion that the peoples that populate the Arabian peninsula are descended from the patriarch of Araby, Ishmael. Thus, from a biblical perspective they may be counted among the tribes and clans of Ishmael, along with the dominant nation of the peninsula, Saudi Arabia—regardless of their modern borders.

Although quietly at present—and largely behind the scenes—Berlin and the Vatican are building an alliance with moderate Arab nations that is destined to take on tremendous significance in Middle Eastern affairs. The Arab Spring uprisings and aftermath are working as a catalyst in the formation of that alliance, and the pope’s visit to Lebanon represents a milestone in its coalescence.

It is significant that, in his condemnation of the attacks on embassies in the Middle East, the pope criticized Islamic Libya and Egypt. Bible prophecy makes plain Libya and Egypt will not be allied with Germany, the Vatican and the Arab states listed in Psalm 83. Instead they will be—and already have become—pillars in a radically Islamist camp led by Iran.

This rise of this Psalm 83 confederacy demands our attention because of the morbid aim the member nations share.

‘No More in Remembrance’

On the topic of Israel, this confederacy of nations says, “let us cut them off from being a nation; that the name of Israel may be no more in remembrance” (Psalm 83:4).

For the last 70 years, Germany has had to live beneath the weight of the world’s memory of its World War ii atrocities. This collective memory shackled German military ambitions.

Sadly, the holocaust did not end with World War ii. That was only round one. Bible prophecy indicates that there is coming an even worse effort to erase every shred of memory of the Jewish nation—and even the biblical name of Israel—forever!

Even more alarming is that “Israel” in this context does not just describe the Jewish nation in the Middle East, but also America and Britain (as explained in our book The United States and Britain in Prophecy). The alliance discussed in Psalm 83 wants to destroy every vestige of these nations so completely that the world will not even remember the name of Israel.

But the Bible makes plain that while this alliance will wreak staggering devastation on its enemies, ultimately it will not accomplish its dark goal of erasing the name of Israel from memory. Those ambitions will be thwarted by an event so revolutionary it will make the Arab Spring regime changes look insignificant: the return of Jesus Christ ushering in age of global peace and prosperity!

To understand more about the rapidly forming Psalm 83 alliance, its key role in end-time Middle Eastern events, and the awe-inspiring conclusion to these trends, read The King of the South.