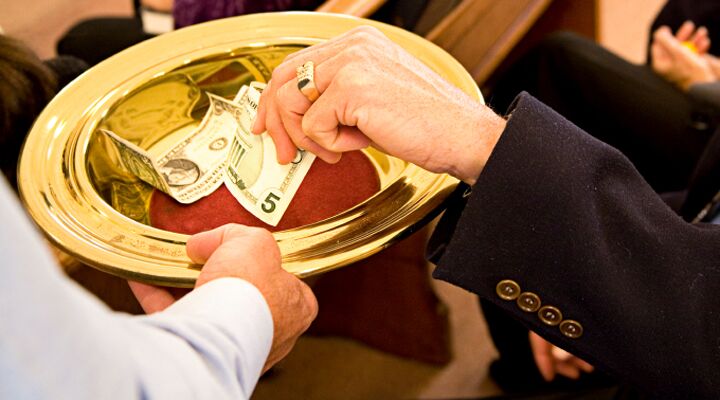 How easy would it be for Berlin to forcibly tax all Germans and turn over their money to Rome, when it is already involved in tithe collection for state-recognized religions?

The German Catholic Bishops Conference issued a decree in September warning that those Germans who opted out of paying the country’s “church tax” would no longer be entitled to sacraments, religious burial or any part of parish life.

This “church tax” is a special tax collected in Germany and several other Western European nations that was introduced in the 19th century in compensation for the nationalization of religious property. All Germans who officially register as Catholics, Protestants or Jews on their tax documentation must pay a religious tax of 8 to 9 percent on their annual income tax bill.

The German government then passes this “church tax” on to the respective religious organizations. If any person does not want to pay the tax, he or she must officially register as being “non-religious.”

In 2011, the Catholic Church received €5 billion (us$6.4 billion) from German taxpayers, making up the bulk of the church’s German income.

Recently, there have been a large number of Germans who have been officially registering as “non-religious,” while still attending Catholic mass and/or other Catholic functions. This is what prompted the decree from the German Catholic Bishops Conference.

“This decree makes clear that one cannot partly leave the church,” the German Bishops Conference said last month, in a statement endorsed by the Vatican.

So, from here on out, German Catholics either have to be full-fledged tax-paying members or they have to leave the church entirely, giving up all rights to the Catholic sacraments.

This decision is significant in that it shows that the Catholic Church is asserting itself in Germany in a way it has not asserted itself in many years. What may be even more significant, however, is the spotlight that this decision casts on the fact that the German state actually collects “tithes” for the major religious institutions that operate within the Fatherland.

In Britain and America, the religious tithe a person pays is a personal matter between that person and his or her church. In Germany, Italy and several other Western European nations, however, people have to officially register as Catholic, Protestant, Jew or “non-religious.” The state then collects the tithe of all “religious” people and passes it on to the church.

Long-time readers of the Trumpet will know that the Bible is full of passages foretelling of a time when Germany (Assyria) and the Vatican (Mystery Babylon the Great) will join forces to form one last revival of the Holy Roman Empire. How easy would it be for Berlin to forcibly tax all Germans and turn over their money to Rome, when it is already involved in tithe collection for state-recognized religions?

Read our booklet Germany and the Holy Roman Empire for further information.