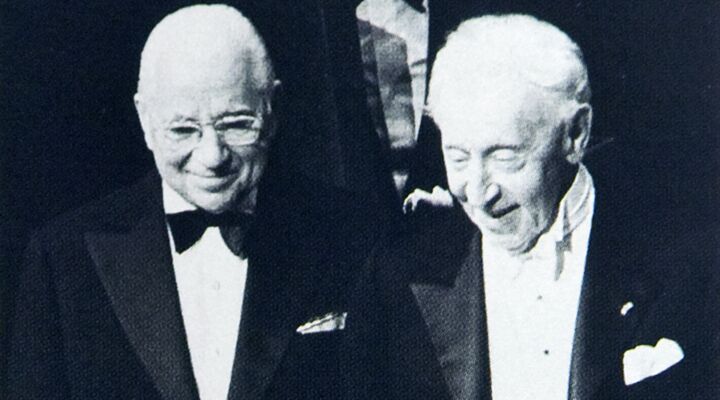 The Sept. 18, 1928, edition of The Bible Advocate featured an article titled “Palestine From Day to Day,” written by Herbert W. Armstrong. Deputy Gruenbaum of the He’Chalutz organization was quoted as saying, “We appear to be on the eve of a new emigration to Palestine from Poland.” The Zionist organization in cooperation with the then British government of Palestine had worked to improve local industry and agriculture.

The years leading up to World War ii saw Poland stampeded by Adolf Hitler, and then it was gobbled up by Russia as a satellite state after the defeat of Nazi Germany by the Allied forces and agreements solidified at Yalta by Prime Minister Winston Churchill, U.S. President Franklin Roosevelt and Russian Premier Joseph Stalin.

Poland remained on Mr. Armstrong’s mind, with him reminding co-workers on Jan. 13, 1949, that former leaders of Poland and several other countries had “told me personally how their countries were overthrown, crushed under the iron boot of Russia, their people’s farms, stores, and businesses taken from them, their citizens made slaves!”

Four years later, Mr. Armstrong’s voice would be heard across Eastern and Western Europe via the world’s most powerful broadcast station. By Jan. 14, 1955, he excitedly wrote co-workers, “Just now—in this afternoon’s mail—we have received our first letter from a regular listener from behind the Iron Curtain!”

“Dear Sir,” wrote the Monday night listener, a Polish medical doctor, “I have been listening with great interest to your The World Tomorrow transmission over Radio Luxembourg 208 meters, 11:30 p.m., and I gratefully accept your kind offer—please send me 1) the Plain Truth magazine, 2) special booklet on Christmas, and 3) please enroll me on your list of candidates for the Ambassador Bible correspondence course. I think I can manage a half hour or more per day to make it worthwhile. I also would appreciate very much a copy of your excellent discourse transmitted December 13. Your argumentation appealed to me, and, as God wishes us to understand the truth properly and to believe wisely, I thought it might be a good idea to seek your help in this respect.”

Mr. Armstrong’s efforts to reach Poland intensified in the ensuing decades as special relationships with world leaders were solidified. By the early ’70s he was close friends with Polish President Lachs and Indian Judge Singh of the World Court in The Hague, Netherlands. By mid-1974, after a luncheon meeting with both, he notified supporters that Mr. Lachs “said he would like for me to visit Poland, and that he would be happy to set up a visit for us, with meetings with the top people” (Bulletin, July 17, 1974).

This offer excited Mr. Armstrong in efforts to reach leaders of other Eastern European countries such as Czechoslovakia, Hungary and Romania. The frigid political temperatures of the Cold War would temporarily halt these plans, however.

During this period, perhaps one of the most poignant moments for Polish relations with Mr. Armstrong came with the Jan. 15, 1975, spellbinding performance of world-famous pianist Arthur Rubinstein on the stage of Ambassador Auditorium. This spectacular performing arts facility was located on the award-winning grounds of Ambassador College in Pasadena, California. Mr. Armstrong founded the college in 1947 with a handful of students and faculty and since that time the college had grown in scope, power and global impact, hosting various world leaders who would visit this unique unofficial ambassador for world peace.

Born in Lodz, Poland, Rubinstein’s first performance in the reputed “Carnegie Hall of the West” drew five standing ovations from a packed crowd. The Worldwide News of Jan. 20, 1975, quoted Mr. Armstrong’s view of the concert. “There are not words in the English language to describe the maestro’s performance,” he said. After the performance, Mr. Armstrong presented Rubinstein with a crystal piece by famed U.S. glass artisans Steuben. Local music critics lauded the performance of the 88-year-old. Bernard Soll, music critic for the Los Angeles Herald-Examiner, went on to compliment “the excellent brochure published by Ambassador College in honor of the great pianist recital in the auditorium Wednesday.

“The recital—before an audience of invited guests—was a special benefit for the International Cultural Center for Youth (iccy) in Jerusalem. This organization is designed to bring closer to Israel’s youth the cultural achievements of the people of the world and to build living bridges for a better future between Jews, Arabs, Druse and Armenian youth in Israel.”

Two months after the Polish maestro’s acclaimed concert, Mr. Armstrong established the Ambassador International Cultural Foundation (aicf) as the humanitarian arm, separate from the church and college, enabling streamlined cooperation and partnership with world leaders and their governments in associated projects, “helping people help themselves” in the spirit of give and outflowing concern one toward the other.

The following year, writing from Rome 13 years before the fall of the Berlin Wall, Mr. Armstrong foresaw the breakup of the ussr’s Eastern European satellite nations. He identified “East Germany, Poland, Romania, etc. breaking with Moscow in the event of the resurrection of the ‘Holy Roman Empire’ and coming into the new united Europe” (co-worker letter, April 22, 1976).

Mr. Armstrong saw Karol Józef Wojtyła’s election to pope in 1978 as a powerful factor in the political change in Poland driven by the Vatican, as evidenced by his writing to supporters Sept. 20, 1979: “As a matter of fact, his having come from Poland, and the effect of his visit there, indicate that instead of the coming ‘resurrected’ Holy Roman Empire including such nations of Israelitish ancestry as Holland, Denmark, Norway and Sweden, the 10 nations to compose it may include such nations—now Russian satellites—as Poland, Czechoslovakia, Romania and Yugoslavia.”

As the first religious leader from Christianity to be officially invited as a guest of Communist China, Mr. Armstrong was thereafter extended similar offers by the governments of Russia and North and South Korea, along with Poland. During this time he maintained that Poland would be part of the prophesied 10-nation combine he had been declaring since February 1934.

He cited inflation, unemployment and other troubles, along with the pope’s bidding, as key indicators of the imminent collapse of Russian influence in the country. This was before the rise to prominence of trade unionist and co-founder of the Solidarity movement, Lech Walesa, aided and supported by the United States and the Vatican.

However, as the Solidarity movement and domestic discontent rose according to his earlier prognosis, Mr. Armstrong feared his pending meeting with Polish leaders was in jeopardy. “I will know in a day or two,” he wrote co-workers on Oct. 23, 1980, whether “I get to visit the present top man in Poland. We did have an invitation, but the recent labor uprising changed the government leadership.”

Mr. Armstrong continued to draw his viewers’ and readers’ attention to Poland and events in Europe, reviewing biblical prophecies found in Revelation 17 and Daniel 2 in light of the pope’s visits to his homeland and their influence in “breaking loose five Soviet satellite nations in Eastern Europe, so they may be united by the Catholic Church with five Western European nations. It will become a colossal third world power, possibly greater than either the Soviet Union or the United States” (ibid, June 22, 1983).

Less than a year before his death, Mr. Armstrong planned that the Church’s largest annual festival, the Feast of Tabernacles, conducted at 89 sites in 49 countries, now for the first time in Church history be held behind the Iron Curtain, at a site at Cracow, Poland.

The Polish can be thankful for the ceaseless efforts of this unofficial ambassador for world peace to reach their country’s leaders and populace with the gospel of Jesus Christ heralding the imminent establishment of His Father’s Kingdom (Matthew 24:14).

From 1961 to 1989 the Berlin Wall separated Eastern and Western Europe. As events reached fever pitch in Hungary, Poland and the ussr, the wall came tumbling down. By that time, Mr. Armstrong was dead, but the prophecies he passionately declared were not, and a world stood in awe at the reunification of Germany and rise of Europe, just as he had declared.

That same year, Trumpet founder and editor in chief Gerald Flurry began, in the tradition and legacy of Mr. Armstrong, to proclaim the “more sure word of prophecy” (2 Peter 1:19). The resulting two decades of his prophesying have seen the promised end-time fulfillment of God’s Word, reported to you by the Trumpet in the tradition of Mr. Armstrong, establishing the Trumpet and the Key of David program as the source for the plain truth of Bible prophecy.