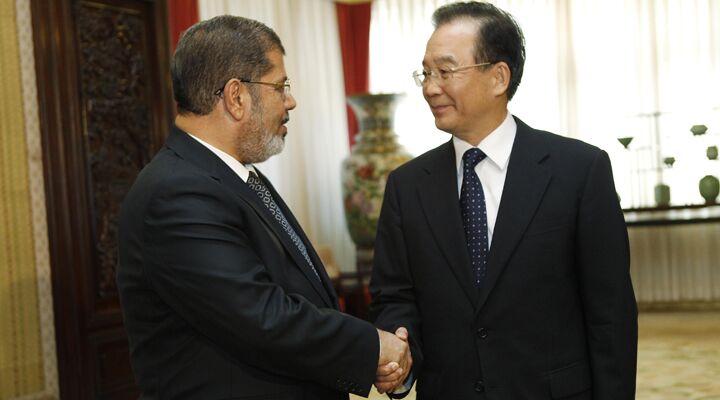 Egypt may be looking to sever ties with America and join the Iran-China axis.

Thomas Friedman, the eminent liberal icon, lamented in the New York Times Tuesday that he finds it “very disturbing” that Mohammed Morsi, Egypt’s new president, is visiting Iran this week. Apparently, Friedman worries that Morsi’s visit is a sign of greater cooperation between Egypt and Iran, and will give legitimacy to Ahmadinejad’s brutal, undemocratic regime.

“This does not augur well for Morsi’s presidency. … He should be ashamed of himself,” Friedman lashed out.

Those are strong, accurate words. They’re also ironic. If you recall, when the Arab Spring rolled though Cairo in early 2011, Mr. Friedman and the New York Times were among the throngs cheering wildly as Hosni Mubarak was tossed from power and “democracy” was established. At the time, neither Friedman nor his counterparts in Washington and in the mainstream media expressed much concern over the fact that the Muslim Brotherhood was standing by, ready to step into the inevitable vacuum created by Mubarak’s ouster.

In his column, Friedman also expressed concern about another visit Egypt’s president made this week. “Morsi’s first big trip shouldn’t have been to just China and Iran,” he wrote. “It should have been all across Europe and Asia to reassure investors and tourists that Egypt is open for business again—and maybe on to Silicon Valley ….” He’s right. It would have been reassuring if Morsi headed to Europe, or to Western-friendly states in Asia. Instead, Egypt’s president opted to visit China, then Iran.

We know why Egypt’s president went to Iran.

The question is, why did he also visit China?

Morsi landed in Beijing on Tuesday, and was warmly welcomed by Chinese President Hu Jintao. For two days, the president and his 80-person entourage of Egyptian business leaders and politicians discussed investment projects with some 200 Chinese counterparts. (Yesterday, the Wall Street Journal reported that the China Development Bank had extended a $200 million line of credit to the National Bank of Egypt.) It’s important to note that this was Morsi’s first state visit outside the Middle East and Africa since he became president. Despite the way it appears, this was not a routine state visit.

China is the nation world leaders visit when they want to oppose or undermine America!

Perhaps this is over-simplifying it a little, but the supreme goal of China’s foreign policy, at least for now, is to oppose and undermine U.S. global power and influence. Be it China’s ongoing naval and military expansion, its regional spats over territorial acquisitions, its behavior in international organizations like the World Trade Organization, or its support of anti-American states like Venezuela and North Korea, Beijing exploits every opportunity to counter America. More than any other reason, this is why China remains a staunch ally of Iran.

The fact that Morsi chose to visit China indicates that Egypt may be looking to join this Iran-China axis!

Last Friday, David Schenker and Christina Lin wrote an op-ed in the Los Angeles Times in which they warned that “if Morsi gets his way, improved bilateral ties to Beijing will embolden, if not enable, Cairo to downgrade Egypt’s ties to Washington.” That’s worth thinking about. For more than 30 years, Egypt has relied chiefly on America for financial, political and military support. Cairo has received tens of billions of dollars in food, merchandise and military hardware. This has given America great leverage. In order to receive this vital aid, Cairo has basically had to endorse, even if unwillingly, U.S. foreign policy in the Middle East and North Africa. For more than three decades, as long as Washington held the purse strings, it was virtually impossible for Cairo to engage in any actions overtly hostile to U.S. foreign policy.

That will change if Egypt develops a significant partnership with China. If Morsi can decouple Egypt from Washington, there will be nothing to hold him back from making decisions that harm American foreign policy.

Here’s something else to consider. The fact that Morsi is cultivating a friendship with China might indicate that he’s about to make some pretty radical changes to Egypt’s foreign policy. These could include severing or rewriting Egypt’s peace treaty with Israel, forming some sort of formal political or trade agreement with Iran, or perhaps exploiting the Suez Canal as leverage over the U.S. or Europe. These moves will be controversial and unpopular, and could easily provoke some heated responses from the international community.

With China’s support, Egypt is far likelier to withstand an inevitable backlash.

From China’s perspective, Morsi’s outstretched hand is a no-brainer. Egypt is the largest Arab country in the Middle East. It has massive stockpiles of U.S. military hardware. And Cairo isn’t one to harp on about respecting human rights, foreign currency manipulation, or trade equality. Beyond all that, a partnership with Egypt comes with enormous benefits for China’s maritime ambitions.

Egypt controls the Suez Canal, one of the most important sea lanes in the world. The Suez is more than 120 miles long, and connects the Red Sea with the Mediterranean, thus linking Europe with East Africa and Asia. Roughly 8 percent of global seaborne trade travels on this maritime highway. It’s also a vital choke point for energy. Each day, 2 to 3 million barrels of oil and fuel products pass through the canal and the Suez-Mediterranean Pipeline, which crosses Egypt. (About two thirds of that oil is headed toward Europe.)

For China, or any global power, developing a healthy relationship with the government that controls the Suez is a strategic necessity!

You need to continue watching Mohammed Morsi and Egypt. Morsi’s visits this week with the leaders of both China and Iran are telling and deeply alarming. China has been instrumental in helping Iran survive every U.S.-led effort to punish the nation for its nuclear weapons program. (Russia has supported Iran too, and it wouldn’t be the least bit surprising if that’s Morsi’s next stop.) The fact Morsi also seeks a partnership with Beijing probably indicates that he’s about to make some decisions that will severely upset, perhaps even harm, the U.S., Europe and Israel.