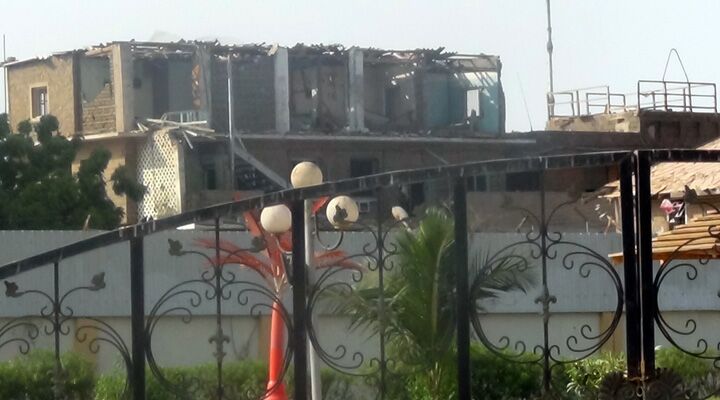 Country by country, Iran is locking down the Red Sea and Suez Canal.

Eighteen miles. That’s the width of the Bab el-Mandab passageway, the narrow stretch of ocean separating Djibouti from Yemen that connects the Gulf of Aden and the Indian Ocean to the Red Sea. In strategic terms, this passage might be called leverage, influence, or power.

As in, control the Bab el-Mandab passage and you possess enormous geopolitical power.

The Bab el-Mandab sea-lane, and the seas that it connects, is one of the main reasons you and I need to be concerned about events in Yemen. Yes, Yemen. That obscure little nation tucked away on the rump of the Arabian Peninsula. This website in recent weeks has highlighted the ongoing relocation of Egypt and Ethiopia into the camp of Iran and radical Islam. Today, Egypt is an Islamist state, an Iranian ally, and perhaps only days or weeks away from formally trashing its 1978 peace treaty with Israel. Ethiopia and Eritrea, believe it or not, are only a few paces behind.

It is in this context that we need to be watching events in Yemen.

First, some background. The Arab Spring rolled into Yemen in February 2011. In February 2012, Yemen’s President Ali Abdullah Saleh finally resigned, after 12 months of massive protests, multiple defections of key military and political officials, and a failed effort to broker a power-sharing arrangement with his opponents. Saleh was replaced by his vice president, Abd al-Rab Mansur al-Hadi.

But Saleh’s ouster did not satisfy many Yemenis. Nor did it set the nation on the road to stability and prosperity, politically, socially or economically. Regular anti-government protests continue, government officials are still defecting, and political stability and unity remain elusive. Moreover, Yemen’s economy is in horrible shape. Worse still, anti-government forces, most notably Islamist terrorist organizations, are wreaking havoc throughout the nation, expanding their reach, and slowly but surely wearing the government down.

Yemen is in deep, deep turmoil. This is evident in the recent spate of terrorist attacks, three of which have occurred in the last five days. Last Saturday, rebel Islamist forces stormed Yemen’s intelligence headquarters building in the port city of Aden. Armed with automatic weapons and hand grenades, the terrorists’ well-planned assault killed 20 soldiers and security personnel. On Sunday, a suspected al Qaeda suicide bombing in the southern province of Abyan killed a commander of an anti-al Qaeda militia. Then on Tuesday, alleged al Qaeda terrorists bombed a key pipeline transporting natural gas to the Belhaf export terminal on the Gulf of Aden. Although no casualties were reported, the attack was another in a series of destructive and expensive attacks on Yemen’s energy infrastructure. According to Yemen’s Ministry of Oil, attacks on energy infrastructure are costing Yemen $15 million per day.

While the Hadi government has had some success in its war on Islamist rebels—thanks largely to U.S. firepower and cash—this week’s attacks are a reminder that radical Islam remains a serious and growing threat. In May, the government regained control of some cities in the south. But rather than curb Islamist uprisings, the offensive seems to have driven terrorists underground, and into a grittier war. Suicide attacks are increasing. Earlier this month, for example, an al Qaeda suicide bomber killed 50 people when he detonated himself outside the home of a local sheik.

Reporting from Sanaa, Yemen’s capital, the Christian Science Monitor observed this week that despite the government’s best efforts, Islamist terrorists continue to cause violence and chaos. “A series of bold attacks and assassination attempts have rocked Aden and the capital, Sanaa, killing scores of soldiers and a number of senior military officials, including Gen. Salem Qattan, commander of Yemen’s Southern Military District and a key leader in the battle in Abyan,” reported the Monitor.

Meanwhile, the pressure on the government is expected to increase. One serious concern is an anticipated food crisis, brought on by a rapid rise in food prices and lack of availability. Last month, the World Food Program reported that half of Yemen’s population could be malnourished. Nothing provokes dissatisfaction and anger like a sore gut, and some now fear that economic stress will intensify public sentiment against the fledgling government. “Yemen’s food crisis does not only represent a threat to Yemenis, but much more importantly it represents a threat to various actors in the region and the wider world,” warned Omar Nasser Mashjari recently. “This is because Yemenis across the country but particularly in the south have lost faith and trust in their government; beyond this they are desperate for any support from anyone willing to help them. When the central government is unable to provide for its people … extremist organizations such as Ansar al-Sharia are monopolizing on the dire economic reality by providing the most basic of needs including food and in turn gain their trust.”

It’s a bleak picture. One of a nation enduring political instability and uncertainty, a tanking economy and an increasingly angry and frustrated population—and on top of all this, a nation bogged down in an expensive life-or-death struggle with Islamist terrorist organizations. It’s a picture of a nation that is weak and terribly vulnerable.

Enter Iran. Earlier this year, the New York Times highlighted the importance of the moral, ideological and military support Iran is giving to Islamist terrorists, including al Qaeda, in Yemen. “In the past several months, Iran appears to have increased its political outreach and arms shipments to rebels and other political figures in Yemen,” the Times reported. Tehran is reportedly supplying Islamists in Yemen with AK-47s and rocket-propelled grenades, as well as material for making explosive devices.

Tehran is especially invested in northern Yemen, with a Shiite organization called al-Houthi. The Houthis’ goal is to not only destabilize Yemen’s government, but also undermine Saudi Arabia’s Sunni government. Iran is Saudi Arabia’s archenemy, and has stepped forward as the Houthis’ primary ideological, financial and military ally. Despite their religious differences, the Houthi and al Qaeda are united, and even reportedly work together when it comes to undermining Yemen’s government. Both are powerful ideological allies of Tehran.

On Tuesday, Iran’s Fars News Agency, citing a spokesman for Yemen’s Revolutionary Forces, reported that “the Yemeni people are deeply interested to establish stronger and very intimate relations with Iran.” According to Fars, the spokesman “reiterated that once the Yemeni people take back power from the Saudi-U.S. pivot, Tehran and Sanaa would certainly develop their ties” (emphasis added).

So, what does Iran expect to gain by establishing a strong presence in Yemen?

Take a look at the accompanying map. Basically, Iran wants Yemen for the same reason it wants Ethiopia, Eritrea and Egypt: to control the Red Sea!

Yemen is adjacent to both the Gulf of Aden and the Red Sea. It sits on the north side of the Bab el-Mandab passageway. Every ship that passes through this passage—and there are thousands every year—would travel within easy range of Islamist missiles stationed in Yemen. Consider the global ramifications: Nearly 10 percent of global oil supplies, more than 2 million barrels per day, pass through the Suez and the Red Sea. Roughly 20,000 ships, an average of 55 per day, pass through the Suez Canal and Red Sea each year. About 15 percent of global maritime tradetravels through the Red Sea.

Talk about power and leverage!

Few see it, but ultimately, this is Iran’s grand strategy for endorsing and promoting the Islamification of Egypt, Ethiopia and Eritrea, and to a lesser extent, Yemen and Djibouti!

Think about the leverage Iran is gaining. It already effectively controls the Persian Gulf and the Strait of Hormuz. Now, in the 18 months since the Arab Spring touched off the rise of Islamist forces throughout North Africa and the Middle East, Tehran has made enormous strides in gaining influence over the Gulf of Aden, the Bab el-Mandab passageway, the Red Sea and the Suez Canal. If Egypt takes control of the Sinai, which appears imminent, Iran will also gain a foothold in the Gulf of Aqaba. It’s startling, when you really think about it, the way Iran is quietly, steadily—without hardly anyone noticing—locking down the Red Sea!

And to think, Gerald Flurry and the Trumpet exposed Iran’s grand strategy in the Red Sea region 18 months ago. Now that’s startling.