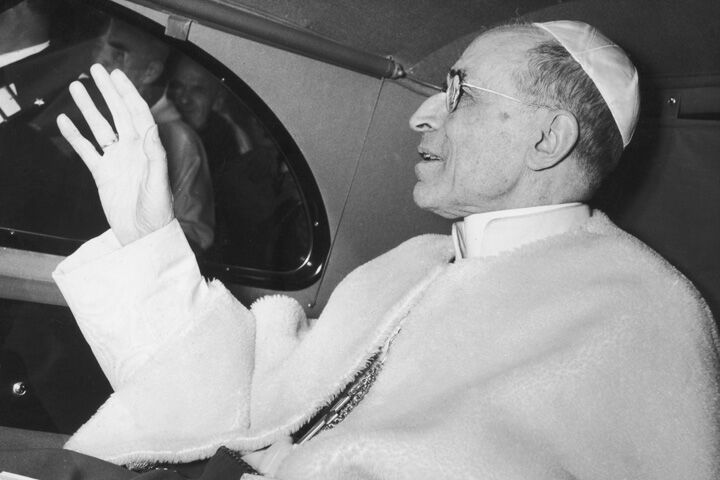 The Vatican’s historical ties with fascist states rise to the surface yet again.

Two events publicized over recent days carry with them unpleasant memories of the Vatican’s historic connection with, and support of, fascist causes—and personalities.

British political economist Rodney Atkinson alerted us to the following release by The Global Alliance for Justice: “The Ethiopian Cause condemns in the strongest terms the Italian government’s construction of an official memorial to the convicted war criminal Field Marshal Rodolfo Graziani” (August 18).

Why are Ethiopians so incensed at the Italian government honoring one of their country’s wartime field marshals in this manner? The reason for their indignation is as morally legitimate as is the condemnation of all perpetrators of fascist and Nazi horrors during World War ii (ibid):

During the Italian war on Ethiopia 1936-1941, Italy carried out a systematic mass extermination campaign in Ethiopia with poison gas sprayed from airplanes and other horrific atrocities that claimed the lives of no less than 1,000,000 Ethiopian men, women and children, including 30,000 massacred in only three days in Addis Ababa as well as the reprisal killings of the entire monastic community at the historic Debre Libanos Monastery. In addition, 2,000 churches and 525,000 homes were destroyed by the Italian fascists. These atrocities were carried out under the direct command of Graziani, known as the Butcher of Ethiopia.Graziani remained loyal to Mussolini until 1945 and served as the minister of defense of the puppet Italian Republic in Northern Italy and committed additional war crimes in North Africa.

But what is so morally reprehensible about this effort to memorialize an Italian war criminal as a war hero is that the moral arbiter of Italian society, and of 1 billion followers globally, has seen fit to endorse it!

“Now the Italian government has honored him with a mausoleum and memorial park, built at taxpayers’ expense, in a village south of Rome. A Vatican representative attended the recent opening ceremony of the Graziani memorial” (ibid; emphasis added).

The presence of a Vatican representative at the dedication of the Graziani memorial is, as Atkinson points out, consistent with the Vatican’s historic linkage with the Fascisti: “There is nothing new about the strong political and historical ties between fascist states and the Vatican. The link has been carried far into the post-Second World War era by the Vatican’s support of the blatantly fascist state of Croatia (see report on Freenations website www.freenations.freeuk.com).”

A few days prior to this release, two prime organs of the Catholic media gave prominence to the latest efforts to whitewash wartime pope, Pius xii. Despite the overwhelming evidence of Pius xii’s compromising hand in relation to Nazism, and in particular, to Hitler’s “final solution” for the Jews, Pope Benedict xvi is treading a steady course toward the beatification of Pius xii.

Thus it is that influential Catholic sources have seized upon the latest publicity being given to the claims of Prof. Ronald J. Rychlak, American law professor at the University of Mississippi, who has publicly endorsed claims by former Romanian intelligence chief, Gen. Ion Mihai Pacepa, that efforts to blacken Pius’s name were part of a Soviet plot.

Apparently Professor Rychlak was initially skeptical of these claims. However, following his coming under the influence of General Pacepais, Rychlak is now convinced that the kgb played a key role in framing Pius xii. He has co-authored a new book called Disinformation. It is centered on Pacepa’s claims of complicity by the kgb in a campaign to denigrate Pius xii.

Two influential Roman Catholic media sources—the National Catholic Register and CatholicCulture.org—headlined this story last week. Look for the Vatican to seize upon this as more grist for the mill for Pope Benedict’s campaign to beatify Hitler’s pope.

In his meticulously researched biography of American Archbishop Joseph P. Hurley, the wartime Vatican diplomat who was a severe in-house critic of Pius xii’s policy of appeasement and reticence on the extermination of the Jews, Jesuit Charles Gallagher reveals the degree of compromise and plain hypocrisy in which Pope Pius xii engaged during that horrific fascist/Nazi period of 1933-1945.

Gallagher highlights Cardinal Hurley’s view that “a pope faced by clear and present evil had to provide unambiguous moral guidance to those who looked to him for leadership. He had to decide on the facts without evasion and condemn that evil in the most explicit language. Confronted by mass murder on an unprecedented scale, the natural human reaction is one of disbelief and denial. Only when a pontiff—the supreme moral authority on Earth—spoke out in the plainest terms could lesser folk grasp the realities of the situation and do their moral duty as Christians” (Studies in Christian-Jewish Relations, Volume 4).

Flying in the face of Vatican efforts to create a positive myth about Hitler’s pope, Gallagher shows that “Hurley grasped the dimensions of the tragedy and the need for moral leadership …. He saw through the specious argument of even-handedness and the fallacy that to speak out as the Nazi machinery of extermination worked at full capacity could somehow make the situation worse. Above all, this very political diplomat [Hurley] understood that the pope must provide a fearless moral lead; if not him, then who?” (ibid).

But the Jesuit priest Gallagher has as much of a chance at getting an audience with the pope on the subject of the reality of Pius xii’s compromising papacy as any realist has of convincing Benedict of the gross immorality of his representative endorsing the Italian government honoring a mass killer as a war hero.

In the light of its historic support of fascism, it is chilling indeed to consider that Bible prophecy forecasts the Vatican seeking to enforce—via a 10-power fascist European imperial government—its assumed role as “the supreme moral authority” on Earth in the very near future (Revelation 13 and 17). The results are prophesied to be disastrous.

To be forewarned is to be forearmed, as the saying goes. Our booklet Germany and the Holy Roman Empire is a solid guide to understanding the reality of what is currently building in Europe—especially in Berlin and Rome—and preparing adequately for the outcome.