When my flight was cancelled, I got a lesson in why the way of give is so important. 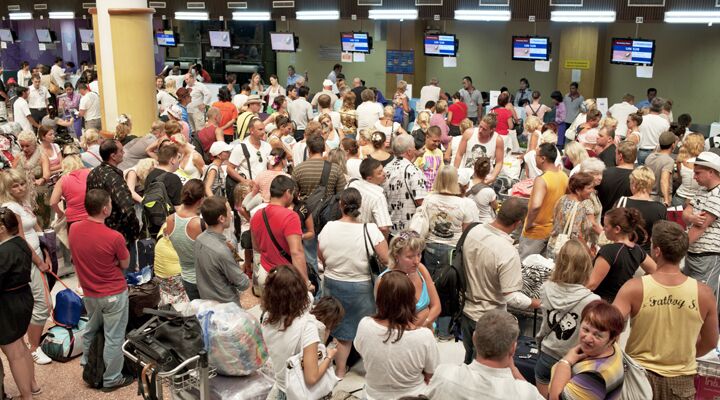 When my flight was cancelled, I got a lesson in why the way of give is so important.

I’m writing from a hotel room adjacent to Terminal 4 at Heathrow, the UK’s biggest, busiest, messiest airport. It’s been an awful, enormously frustrating day. And a sad one, too. This is because ever since I arrived at 7:15 this morning, I’ve witnessed a world-class display of incivility, rudeness and disrespect. Of pure, unbridled selfishness.

When I arrived at the gate, everything was normal. Or at least “normal” for the 21st century: blatant homosexuals; freakily dressed, body-pierced Goths; disengaged fathers; teenage girls caked in make-up and dressed like call girls; and of course, obnoxious, disobedient, disrespectful, out-of-control children. Fifty years ago, this would have constituted a nightmare. Today, it’s life at Gate 5, Terminal 4 of Heathrow—and virtually every other airport in the Western world.

It was obvious that all was not well when we hadn’t boarded the plane by 9 a.m. Fifteen minutes later—and 15 minutes before the plane was due to take off—we were informed that the flight would be delayed 1½ hours. So it began. Initially, it was evident in the chorus of groans and complaints. But within a few minutes, a crowd of visibly frustrated passengers had begun to circle the check-in desk. One especially upset lady—we’ll call her Angela—marched up with steely determination to lambast the unfortunate airline employees.

At 11 a.m., we were told the plane would depart at noon. At noon, we learned it would leave at 1 p.m. Each time the flight was postponed, the tension rose. The moans and complaints got louder. The anger was palpable—manifested in red faces, raised voices, icy glares and a steady, audible gush of swearing. It went on like this till 3:15 p.m., when we were informed that the flight had been cancelled.

Rather than sitting and waiting for instructions, as asked, the passengers formed a long line to take turns fuming at the airline employees. By now, Angela and her gang were in a frenzy. Finally, Angela snapped and marched to the front of the line, pushed her way past the other passengers, and let the airline have it: “Shame on you! Shame on you!”

You can understand the frustration we were all feeling. But it wasn’t the frustration or anger that mildly disturbed me. It was the total lack of control over those emotions. The scene was largely devoid of respect, of civility, of empathy. Selfishness reigned supreme.

This really struck me while I was waiting beside the carousel for my luggage. About 25 yards away, jammed in the middle of the tense, exasperated crowd, was a woman (we’ll call her Christy) with a large dual stroller with two children in it. One was about 2, the other younger. Both were awake, obviously frightened, and bawling. Poor Christy was a wreck. She couldn’t stray from her screaming children. Yet, she needed her bags. I watched from afar for 10 minutes and not a single person offered to help Christy and her scared, screaming children.

I was eventually able to jostle my way over and help the poor woman. From here, it was time to catch a bus to the hotel. There we were, a couple hundred people, bags in tow, crammed onto a narrow sidewalk trying not to stumble in front of passing buses, taxis and cars. We waited 20 minutes. No buses. No one was guiding us, informing us, organizing us.

Then it started to rain.

When the bus finally arrived, it was immediately obvious that there wasn’t enough room for most of us. But that didn’t stop the entire crowd from bull-rushing the vehicle. It was at this moment that I caught sight of Bob. Bob was chaperoning some sort of high school trip. A few decades ago, Bob and his entourage would have found their place in the line and calmly waited. In fact, Bob probably would have encouraged his young cohorts to let the elderly board first, or even instructed the boys to help load luggage.

Not 21st-century Bob. As the crowd moved toward the bus, Bob noticed a space in front of an Indian couple with three children. He pounced like a panther. Then, with his position established, he turned around and admonished his lads to join him. It was almost unbelievable. It was raining. People were scrambling everywhere. And this man was attempting to maneuver his entire entourage in front of families, the elderly, and everyone else in line!

This may not sound all that bad. There were no riots, no fist-fights, no full-scale breakdowns. Indeed, most of the passengers—although many were visibly frustrated and openly hostile toward the airline and its officials—kept to themselves. But that’s just it.

Virtually every individual was focused solely on self!

If you trace each one of these issues back to its roots, you will see the same thing I saw at Heathrow: thespirit of selfishness!

Herbert W. Armstrong described this way of thinking and living succinctly. He called it the “way of get.” It’s a horrible way of life, one that results in dissatisfaction, misery, frustration, hostility, trials and tribulations.

So what’s the solution? It’s simple: Live the way of give! That is the happy way. And God actually teaches it through His law, which embodies the give way. To learn more about it, request a free copy of our booklet The Ten Commandments.