Why it’s important for children to use their time wisely. 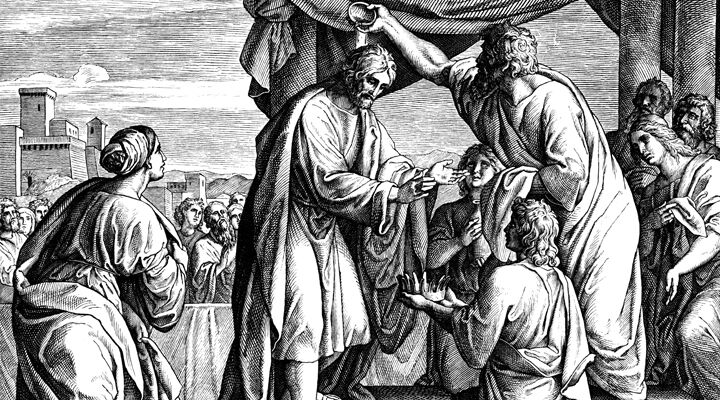 Why it’s important for children to use their time wisely.

A recent study revealed that almost 5 million Americans play video games at least 40 hours a week—the equivalent of a full-time job. Imagine what talents these Americans could develop, what great things they could accomplish, if they devoted those 200 million hours to worthwhile pursuits!

Children have a golden opportunity to develop their talents because they have more time to do so—time that is much more difficult to come by during adulthood.

In ancient Israel, God was looking for one such youth—one who was productive and diligent with his time—who could one day replace Saul as king of Israel. At the end of His search, God sent the Prophet Samuel to the house of Jesse. There, he was to anoint one of Jesse’s sons to become king (1 Samuel 16).

Jesse presented his seven sons, one after the other. To Samuel, they all seemed suited for the honor. But as each son passed by, God told Samuel that this son was not the one chosen. God told Samuel, “Look not on his countenance, or on the height of his stature; because I have refused him: for the Lord seeth not as man seeth; for man looketh on the outward appearance, but the Lord looketh on the heart” (verse 7). God does not see man as man sees man. He doesn’t look for the next attractive Hollywood-style star. He looks at who we are.

After God had rejected seven of Jesse’s sons, Samuel pressed the father to see if there were any other children in the family (verse 11). There was one more. He was in the fields, tending to the sheep.

In verse 12, the youngest of eight brothers is finally introduced—David. He was a pleasant-looking, average-size young man. One thing that really set him apart was how he used his time. Over weeks and months and years spent in the fields of Judea, working and even sleeping outdoors, David had grown physically strong. He protected the flock, wrestling and killing a lion and a bear. Even as a simple shepherd, David demonstrated the traits of a courageous warrior—taking on ferocious animals if he had to. But he had also developed his mind; he had become an outstanding musician and poet, and he had a balanced and well-rounded personality.

And yet, considering how his father overlooked him when Samuel arrived, David certainly wasn’t considered the star of the family. God actually chose the boy the rest of the family had voted “least likely to succeed”!

He was impressed with this young man’s heart.

Even though David was converted to God’s way of life as a teenager, and even though it was he whom Samuel anointed that night, he wouldn’t become king for another 17 years. Samuel actually sent him right back out into the field (verse 13). That says a lot about the amount of time involved in conversion. David didn’t just luckily stumble into his kingship as a teenager. He needed experience, he needed to grow, he needed to overcome sin and to build faith—he needed time.

David’s rise as a young man coincided with the decline of Saul, who had lost God’s Holy Spirit and was suffering from demonic influence. Saul, deeply discouraged, alternated between suicidal depression and fiery rage. His advisers became gravely concerned about his well-being. Finally, Saul agreed to let them find someone who could comfort him. They looked for someone who had developed an ability to play soothing music.

Notice verse 18: “Then answered one of the servants, and said, Behold, I have seen a son of Jesse the Bethlehemite, that is cunning in playing, and a mighty valiant man, and a man of war, and prudent in matters, and a comely person, and the Lord is with him.”

David may not have been widely known at the time, but this royal servant obviously knew him and was aware of the unique skill set he had developed. During his life, David probably wrote hundreds of poems, psalms and songs. This servant recognized him as an accomplished musician and “prudent in matters”—a skillful communicator.

Saul arranged to have David come play for him. Verse 21 says, “And David came to Saul, and stood before him: and he loved him greatly; and he became his armourbearer.” Thus began a beautiful relationship that ended up revealing so much about David’s character. David was the rightful heir to the throne, yet he displayed not even a hint of jealousy or competition toward Saul. In fact, he became one of Saul’s most trusted advisers! As long as Saul remained king of Israel, David humbly submitted to him.

God was preparing David to become king—over time—by placing him exactly where he could learn how the royal court and the government of the kingdom functioned.

These verses reveal how young David spent his time. For all his accomplishments that are recorded, he devoted many hours, days, years of his youth to developing his talents, which are not recorded. He had to learn from childhood how to develop character to the point where he could be a courageous and faithful shepherd, then a loyal adviser, then much, much more. This young boy did not waste his youth. He was active, productive, diligent. He learned how to labor outdoors, how to focus on music and poetry, how to follow God’s law, how to love people, and how to become a man after God’s own heart.

Because of how this young man spent his time, God was able to take David—whom few thought would amount to anything—and turn him into a king!