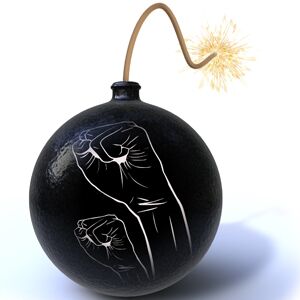 The trend of mobs of black youths committing crimes is growing. Authorities are helping no one by pretending it doesn’t exist.

It’s a disturbing video. A picture of brazen lawlessness—anarchy. A mob of perhaps 300 black youths besieging a Walmart, terrorizing staff and customers. It was filmed in Jacksonville, Florida, just a week and a half ago.

Such events have become common in America. In hundreds of incidents in cities and towns throughout the country, gangs of young people are coming together to commit random acts of terror—stealing, vandalizing, intimidating, assaulting, even raping and killing.

If you just read the stories, the one characteristic generally uniting the criminals is their age. Reports always mention their being young adults and teens.

But if you watch the videos—the footage from surveillance cameras, or the jerky cellphone images that these youths proudly upload to YouTube—another commonality becomes unmistakably clear: These kids are almost all black.

It’s the invisible fact. It’s missing from report after report on these incidents.

In fact, politicians, law enforcement officials and other authorities, reporters and media analysts do more than just ignore the racial component. Often they flatly deny it, even to the point of lying about it.

This is what makes the book White Girl Bleed a Lot, by award-winning author Colin Flaherty, such an astonishing read. It thoroughly documents what is nothing less than the modern rise of the race riot in America: dozens upon dozens of dozens of events with a clear racial component, many of them black-on-white or black-on-other-race assaults punctuated by blatantly racist hate speech.

What makes it even more astonishing, though, is the prevalence of officials brushing over or covering up the truth. They believe that simply acknowledging the undeniable racial aspect of these events is itself racist—apparently a bigger problem than the crimes themselves.

Take Miami Beach. For five days each year around Memorial Day, it becomes a destination for a massive influx of 350,000 to 400,000 black visitors. In the last few years, the event has turned the city into what many have described as a war zone—with widespread noise, vandalism, violence, car crashes, gunfire and assaults on police—and has left more damage in its wake than a hurricane. Flaherty calls it “the biggest race riot in America.” News reports mention the violence and destruction, but never the race of the perpetrators. The same is true of Myrtle Beach, which on the same weekend each year becomes the meeting place for some 300,000 African-American bikers. Last year, this upscale family town witnessed a heap of mayhem—including five armed robberies, a stabbing and a shooting—all within a single eight-hour period that weekend. But, the official line goes, it had nothing to do with race. “[I]sn’t it strange, for good or bad, that 300,000 black bike enthusiasts can come to a small town, and no local media mentions the group or its members even once?” Flaherty asks.

It was at a mob scene in Wisconsin last July that the statement Flaherty used as the title for his book was uttered: A white woman under attack heard her black assailants say, “Oh, white girl bleed a lot.” That night, a large group of blacks attacked a group of a couple dozen people who were watching fireworks, and a BP service station was ransacked, possibly by the same group. The police chief responded by insisting that crime is colorblind—after all, the mob also assaulted blacks and Asians, in addition to whites. A few weeks later, hundreds of black people beat up whites at the Wisconsin State Fair in Milwaukee. Around the same time, a similar horrifying incident went down at the Iowa State Fair in Des Moines, which the attackers were overheard calling, “Beat Whitey Night.” One reporter called the reporting on race a rush to judgment and insisted it never happened.

Perhaps America’s flash mob capital is Chicago. A group of 70 blacks suddenly storm a McDonald’s. Fifty black youths mob a Walgreens on the Magnificent Mile. Over a dozen black teens board a Chicago Transit Authority buses, attack passengers and steal their cell phones. A hundred black teens assault two people on bikes and throw them into Lake Michigan. On Memorial Day 2011, against a backdrop of several of these types of crimes, violent gangs of blacks began to assault people and riot, while others callously cheered and egged them on. City officials quickly closed the beach for the weekend. But they subsequently refused to acknowledge that race or criminality had any bearing on their decision—and, strangely, even denied there had been any violent activity. They insisted their decision was made purely to protect people from the heat.

Amid all these attacks, Chicago Tribune readers began to question why the paper never reported the fact that the attackers were all black. “There are good reasons not to identify the attackers by race,” the paper responded. “It’s the newspaper’s sound general policy not to mention race in a story, whether about crime or anything else, unless it has some clear relevance to the topic. … My question to readers accusing us of political correctness is: Why do you care so much about the attackers’ race? If you fear or dislike blacks, I suppose it would confirm your prejudice. But otherwise, it tells you nothing useful.”

No relevance, nothing useful. In most cases, those who are covering over the racial aspect of these events are trying to lower the temperature, defuse the crisis. It’s understandable. Most of them are surely sincere.

However, looked at squarely, the real undercurrent to this trend is that authorities in government and the media are afraid to tell the truth. They fear the backlash it could cause among blacks.

Their silence, however, isn’t calming anyone down.

Many people blame the authorities. Police often get involved in these incidents; commonly, some youths are arrested—sometimes, even shot. When pictures or footage of white police officers dealing with young black people is published or aired, it unavoidably carries a strong racial message.

To many, it reinforces the explosive belief that blacks are under attack in America.

After a series of attacks in Chicago by almost exclusively black mobs mostly on white individuals, the city’s superintendent of police stepped up and bravely addressed the racial aspect of the violence. How? By blaming the inner-city violence on some kind of racist conspiracy: specifically, “federal gun laws that facilitate the flow of illegal firearms into our urban centers across this country that are killing our black and brown children.” What? In front of a cheering audience, he called these laws “government-sponsored racism,” comparable to segregation and slavery.

This is supposed to alleviate the problem of black youths creating violent flash mobs?

Colin Flaherty began researching this phenomenon with the intent of writing a magazine article about it. But the evidence quickly piled so high that he realized he had a book on his hands. White Girl Bleed a Lot is filled with so many examples, one column can’t even begin to communicate the scope of the problem.

The sad truth is, this isn’t going away. It is growing. To pretend it is something other than what it is—race riots in America—is misguided and solves nothing.

“The dangers to the nation as a whole are an even bigger problem,” wrote Thomas Sowell in a review of Flaherty’s book. “The truth has a way of eventually coming out, in spite of media silence and politicians’ spin. If the truth becomes widely known, and a white backlash follows—turning one-way race riots into two-way race riots—then a cycle of revenge and counter-revenge can spiral out of control, as has already happened in too many other countries around the world.”

This is a racist bomb that has been building for years, decades, in this country. As Ayn Rand once said, “We can evade reality, but we cannot evade the consequences of evading reality.”

God’s prophecies, recorded millennia ago in the Bible, speak of racial discord creating enormous problems in our world today, with massive race riots culminating in burning cities. It is a subject the Trumpet has repeatedly visited as growing tensions have heightened the relevance and urgency of these prophecies. To learn more about where the Bible says this trend is leading, read our article “Race to War.”

The wounds of victimhood, the emotions of grievance, the demand of each race for its own version of justice, no matter the cost—these forces are boiling in America, and the lid is starting to blow off.

Why? Because of human nature—unbridled and undisciplined. It is human nature that creates prejudice, jealousy and envy, competition and strife, resentment of authority, vanity, lust, greed—evils that always end up leading to violence.

But feeding that human nature, inspiring it, is that invisible force, the “god” that “deceiveth the whole world.” Satan the devil is the supreme racist—he hates all races, and passionately aims to destroy the human race! And he is stirring racial hatreds in the nations today, laying the groundwork for a terrifying social explosion!