Waging war from 50,000 feet by remote control is cleaner—but does it make us safer? 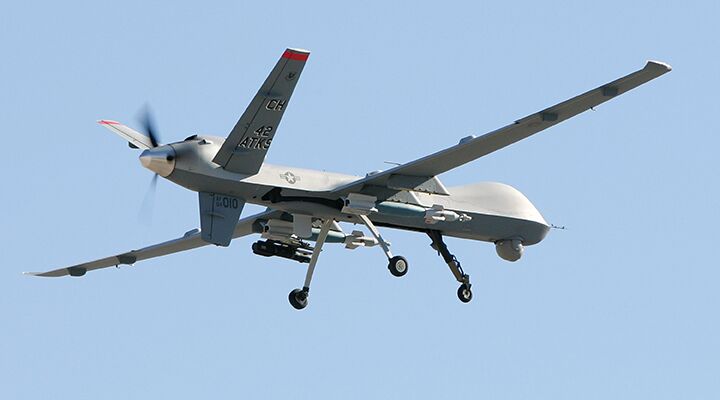 Waging war from 50,000 feet by remote control is cleaner—but does it make us safer?

The president’s new plan calls for trimming about 100,000 soldiers from the ranks of the Army and the Marines. The president and his advisers are advocating a kind of sterile war-making directed out of air-conditioned cubicles of joystick warriors, who fight a war halfway around the world brought to them on computer screens. This new breed of soldier kills bad guys and then heads home for dinner.

This robotic trend has been overtaking the military for the last decade. Unmanned aerial vehicles, otherwise known as drones, have become indispensable war fighters because they are relatively cheap, and, ironically, they are dispensable. Including peripheral systems, an mq-9 Reaper drone costs a little more than $30 million, while the manned Joint Strike Fighter will cost about $140 million.

Drones are changing how America engages in war. For politicians and military staff, the advantages are especially alluring. It is war with less nuisance: less blood, less money. When a robot is blasted into shards of metal and oozing fluid, there is no sad funeral, no letter to bereaved parents and no national angst at the untimely death of yet another young man in the prime of life. Drones offer freedom from some of the human constraints and risks that come with conventional and counterinsurgency warfare. So far, drones have not become a hot-button issue among the mainstream media, so the military enjoys a certain amount of impunity. This makes it more likely to take risks it would not otherwise take, and more likely to use deadly force.

It is hard to argue with the success these drones have had. In conventional war, counterterrorism and covert cia operations, they have proven highly effective. They have given America advantages that the enemy just doesn’t have.

7,494 of the military’s total aircraft are now drones, according to congressional research published in January. That’s about 31 percent—up from 5 percent just seven years ago. While manned planes continue to receive the lion’s share of procurement dollars (92 percent), the United States has still spent nearly $26 billion on drones since 2001. And costs for robots are way below those of manned aircraft. For $1 billion, you can buy about seven F-35 Joint Strike Fighters, or you can get about 33 Reaper drones. For a government and military complex facing budget pressures, the bang for the drone buck is quite compelling.

Of the 7,494 drones in use today, about 5,300 are Raven drones. Built for conventional and counterinsurgency warfare, the $35,000 hand-launched remote-controlled uav has a ceiling of 500 feet and a range of about six miles, and it can return to its launch point with the press of a button. During the Second Gulf War, the Raven was used for advanced reconnaissance and surveillance.

But it’s the Predator drone and Reaper drone that garner the most media attention. Used for conventional, counterinsurgency and counterterrorism work by the military and the Central Intelligence Agency, the drones can be outfitted with Hellfire missiles, take high-quality photos and listen to cell phone conversations—and all from 5 to 10 miles above the ground. Deployed in groups of four, they can be kept in almost continuous night-and-day operation, what the Air Force calls “deadly persistence.” As of January 2012, the U.S. has 161 Predators and Reapers. Pilots—including some who have never flown a real plane—sit in cubicles halfway around the world and scour video feeds for targets. Iterations of these two drones have been operational in the Balkans, Afghanistan, Pakistan, Iraq, Yemen, Libya, Somalia and along the U.S.-Mexican border.

The highlight of the drones’ tour of duty so far has been the alleged dismantling of al Qaeda. In 2009, counterterrorism officials credited drones with having killed over a dozen senior al Qaeda leaders and their allies in the previous year—comprising more than half of the cia’s 20 most wanted “high value” targets. As recently as this past June, U.S. Secretary of Defense Leon Panetta reported that a U.S. drone strike had killed al Qaeda’s number two, Abu Yahya al-Libi, in Pakistan’s lawless North Waziristan tribal area.

In addition to these two models, other unmanned combat aerial vehicles are in the works. Nearly a trillion dollars has been invested in the Northrop Grumman x-47b, which is designed to take off from an aircraft carrier, bomb its target, and return to the mother ship all while being flown entirely by computer. Boeing is developing the Phantom Ray ucav for surveillance and ground attack. A dizzying number of other drones are being researched, developed, tested and delivered—including drones that can carry nuclear warheads. This is the future of American warfare.

But the advantages and early success of unmanned aerial vehicles comes at a cost, including a bad case of overconfidence. The U.S. military is overestimating the strength of this new technology while simultaneously underestimating threats to it. This has led military planners and politicians to overreach, turning their present tactical monopoly into a full-blown military strategy for the future.

This overconfidence is leading to mistakes that America’s enemies have exploited and will continue to exploit. America may wield a vast technology edge over the Taliban and other tribal terrorists, but more technically advanced enemies are lurking in the shadows, working to take advantage of weaknesses in America’s new robotic army.

Primitive terrorists with machine guns and grenade launchers may be vulnerable to American drones. But American drones are vulnerable to cyberwarfare. Drone failures and captures have already been made public, underlining the risks Washington is taking by gambling the nation’s future on robots.

Emerging systems simply have errors. Both the technology itself and the systems designed to prevent problems will always contain flaws—flaws that can be exploited. There are flaws designers are aware of, flaws they are not aware of, and flaws cyberattackers can build into the system—potential backdoors for sabotage, data mining or worse. And it’s happening already.

An egregious example of American complacency occurred in 2009. An Iraqi insurgent was detained, and his computer confiscated. On its hard drive, authorities found hours of supposedly proprietary and secret drone video feeds. How in the world did a low-level Iraqi insurgent get his hands on American drone video feeds? Someone bought a satellite video capturing program for $26 off the Internet and loaded it on the computer. With these video feeds, he might have been able to inform other insurgents of impending drone attacks, perhaps allowing them to live and kill another day. This mind-boggling breach must have caught U.S. commanders off guard, right? Not so. Wired online reported, “[H]ere’s the real scandal: Military officials have known about this potential vulnerability since the Bosnia campaign. That was over 10 years ago” (Dec. 17, 2009).

Wired online also reported on Oct. 7, 2011, that a major virus was plaguing the onboard computers of the Predator and Reaper drones. The virus was traced back to a staff member who inadvertently uploaded it from a thumb drive. The virus has resisted all attempts to wipe it from infected drones. It also allegedly monitored keystrokes and could have mined sensitive data from classified systems. But most alarming of all is that the military personnel responsible for removing the virus and protecting the wider military network found out about the problem by reading Wired’s breaking news report.

Lower-level technicians did not follow the chain of command and report the infection in a timely manner. In fact, more than two weeks passed before appropriate military personnel were mobilized to take any serious action. One military security source said, “Nothing was reported anywhere. They just didn’t think it was important enough. The incentive to share weaknesses is just not there” (Wired, Oct. 11, 2011). In subsequent reports, the military reported that the problem was benign after all, and no serious damage occurred. But what else is it going to say?

Then there is the curious case of Iran capturing a fully intact version of the stealthy Sentinel spy drone last December. Iranian officials claimed they had hacked into its navigation controls, spoofing gps signals and tricking the drone’s onboard computer to land in Iran. While the U.S. military denies the drone was hijacked, some Western analysts say that, though remote, navigational spoofing is possible and has been possible for the last 20 to 30 years. No other reasonable explanation has been given as to how Iran got its hands on one of America’s most advanced spy drones in pristine condition. Iran has been reportedly offering up the drone’s secrets to the highest bidders, including China and Russia, who will try to reverse-engineer the drone.

Finally, two Cambridge experts have found that some made-in-America-but-assembled-in-China computer chips aboard some military drones have a backdoor built into them.

“In a paper that has been published in draft form online and seen by the Guardian, researchers Sergei Skorobogatov of Cambridge University and Chris Woods of Quo Vadis Labs say that they have discovered a method that a hacker can use to connect to the internals of a chip made by Actel, a U.S. manufacturer. ‘An attacker can disable all the security on the chip, reprogram cryptographic and access keys … or permanently damage the device,’ they noted” (Guardian, May 29). These chips are in American dronesright now.

None Goes to Battle

Unmanned aerial vehicles have offered the United States tactical advantages and have achieved several successes. And they are just part of the most advanced military the world has ever seen.

However, these tools are necessarily and unfathomably complex, requiring a network of complicated systems to not only function together properly, but also remain free of interference and attack. They have unique limitations and vulnerabilities that are already being exploited.

Will the benefits outweigh the risks? For clues as to the answer, we can turn to biblical prophecy.

Many Bible prophecies make the surprising prediction that America—which is descended from ancient Israel—is about to be defeated militarily. If you compare its technology and its arsenal to any other nation or group of nations, this seems almost impossible. But if you respect the prophecy more than the conventional wisdom, your perspective on America’s increasingly drone-reliant military strategy changes—and possibilities emerge of just how such a defeat might happen.

Ezekiel 7:14, written over 2,500 years ago, makes a startlingly relevant prediction: “They have blown the trumpet, even to make all ready; but none goeth to the battle ….” An attack will happen, and America will need a military response. The call will go out to defend, yet none will answer the call. It is entirely feasible that scenario is attributable to a communication breakdown caused by technology failure—a hacking or other form of sabotage.

Trumpet editor in chief Gerald Flurry has repeatedly targeted America’s heavy reliance on technology as its fatal weakness. Its powerful-yet-vulnerable drone program is a prime example.

America’s trust in technology will lead to a breach of its defenses and its eventual defeat at the hands of a powerful and sophisticated enemy.

Why will America meet this terrible fate? “[N]one goeth to the battle; for my wrath is upon all the multitude thereof,” Ezekiel continued. America will face a horrific—and avoidable—demise. God will punish this nation for its rampant sins and faithlessness, and the highest technology imaginable cannot stop that.

But God has also promised that He will raise it up from the ashes of horrific defeat once this nation repents of its sins. In the process, it will learn a hard but beautiful and eternal lesson. As Jeremiah wrote when his nation faced its own national security disaster: “Cursed be the man that trusteth in man”—or his robots.