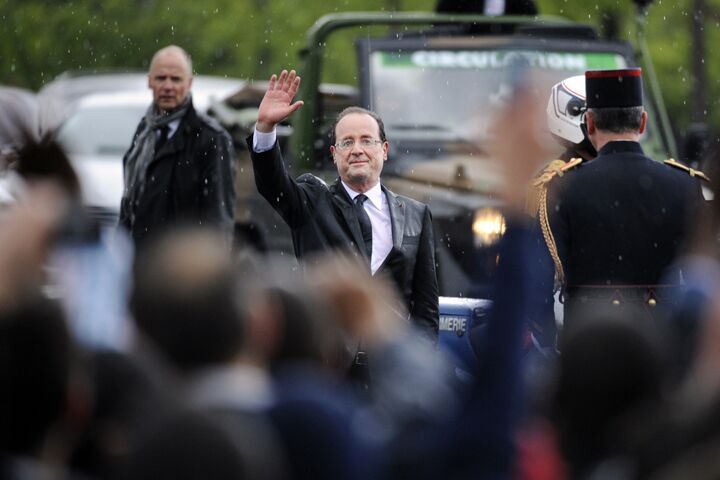 A political facet of Islam’s push against Europe

A study into the voting patterns that nudged François Hollande to victory in France’s May 6 presidential election reveals that his win—and the resulting rupture of the Franco-German axis that has defined Europe for decades—was overwhelmingly due to the Muslim vote.

During his campaign, Hollande courted France’s Muslim vote by offering an amnesty to all of the 400,000 illegal Muslim immigrants living in the country. He also pledged to revise French law to allow Muslim residents without French citizenship to vote in municipal elections.

An unprecedented number of France’s Muslims—2 million—came out to vote. An astonishing 93 percent of these voted for Hollande, while only 7 percent voted for the incumbent, Nicolas Sarkozy. This means 1.7 million Muslim votes went to Hollande. And, since Hollande defeated Sarkozy by only 1.1 million votes in the election as a whole, it’s clear that the Muslim vote was one deciding factor placing Hollande in the Élysée Palace. Soeren Kern, senior fellow for European politics at the Strategic Studies Group, said, “The French vote marks the first time that Muslims have determined the outcome of a presidential election in a major Western European country.”

The fact that France was the nation where the Muslim vote brought about a sea change is important for two key reasons.

First, when it comes to immigration issues, France provides what Kern calls “a preview of things to come” for the rest of Europe. With 5 to 6 million Muslims, France is home to Europe’s largest Muslim population, and those numbers are expected to exponentially increase in the years ahead. As France’s politically active Muslim population grows, and as the majority of Muslims cast their vote for leftist and socialist parties, conservative parties will find it harder all the time to win elections in France.

Other European countries are experiencing similar influxes of Muslims immigrants, and could begin to see more elections tipped by the Islamic vote.

Also noteworthy is Hollande’s pledge to revise French law to allow Muslim residents without French citizenship to vote in municipal elections. Most Muslims in France—and in Europe as a whole—suffer higher levels of unemployment and live in lower-income households. These tendencies weld socialists and Muslims together in a power-dependence relationship—between the providers of welfare benefits and the providers of votes. For this reason, socialists like Hollande enact policies that increase Muslim immigration, which in turn creates more voters for socialist politicians.

The second reason it is noteworthy that France was the location of this Muslim political overthrow is because, for decades, Europe has been defined by the Franco-German leadership alliance. But, while conservative Sarkozy was submissive to Germany’s prescription of austerity measures to remedy the eurozone’s economic ailments, Socialist Hollande is overtly opposed to it. Instead, he believes “economic growth” fueled by incessant money printing is the solution to the financial crisis. For this reason, Hollande’s election represents a break in that Franco-German alliance.

This will ultimately bolster German strength and resolve. With the lynchpin Franco-German partnership effectively broken, German Chancellor Angela Merkel has begun making grand overtures to Italian Prime Minister Mario Monti. While France strove to position Germany as Europe’s economic engine but not at the political helm, Italy will be much more accommodating to Berlin’s leadership ambitions. The geopolitical romance now burgeoning between Germany and Italy will blossom into a partnership in the image and likeness of the old Berlin-Rome Axis of 1939.

Bible prophecy shows that, somewhat ironically, this new Italy-German balance of power in Europe that French Muslim voters helped create will ultimately crush the rising Islamist tide: “And at the time of the end shall the king of the south [radical Islam] push at him: and the king of the north [German-led Europe] shall come against him like a whirlwind …” (Daniel 11:40).

Radical Islam, under Iran’s sway, is already pushing against Western powers with increasing ferocity. The push is coming in the form of terrorist attacks, aggressive immigration into Europe, economic extortion, brazen defiance of international laws, human rights atrocities and more. And the success of French Muslims in tipping France away from Germany and toward self-destructive, Islam-embracing socialism represents a clear political manifestation of this “push.” That multifaceted push will continue to intensify until Europe—led by Germany with Rome’s unwavering support—reacts “like a whirlwind,” with a decimating blitzkrieg attack. So, French Muslims have bruised the EU’s Franco-German heel by electing Hollande, but Berlin and Rome will ultimately bruise Islam’s head.

To understand more details of the rapidly-approaching fulfillment of these prophecies, and how closely they connect to the best imaginable news, read Trumpet editor in chief Gerald Flurry’s landmark booklet The King of the South.