‘Jesus Christ the same yesterday, and today, and forever.’ 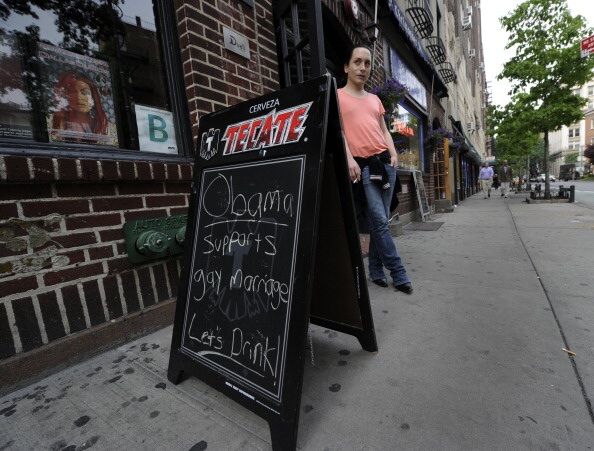 ‘Jesus Christ the same yesterday, and today, and forever.’

When campaigning for the U.S. Senate in 2004, Barack Obama credited religion and faith for dictating his position against same-sex “marriage.” “I’m a Christian,” he said. “I do believe that tradition and my religious beliefs say that marriage is something sanctified between a man and a woman” (emphasis added throughout). He reiterated this position when campaigning for president in 2008, calling marriage a “sacred union” between a man and a woman.

In May, however, President Obama changed his mind and decided to endorse homosexual “marriage.” He then defended his flip-flop by invoking the same Jesus—and the very same inspired text—that he once used to defend the traditional marriage union. He also credited staff members, neighbors, friends and family members—even his two daughters—for influencing his “evolving” position over the years. But in the end, what mattered most was the Golden Rule: “Treat others the way you would want to be treated,” the president said, paraphrasing Luke 6:31.

Of course, Mr. Obama’s “evolving” position on same-sex “marriage” is really about political expediency—certainly not the inspired teachings of Jesus. But it still comes as quite a shock when Jesus Christ and the Holy Bible are dragged through the mud in order to defend behavior that God emphatically condemns.

Last year, in Britain, Prime Minister David Cameron upset many traditional Christians when he announced plans to legalize homosexual “marriage” before the next election. This April, to defend his controversial plan and to bridge the gap between his government and the Christian community, Mr. Cameron once again turned to—you guessed it—Jesus Christ.

“The New Testament tells us so much about the character of Jesus; a man of incomparable compassion, generosity, grace, humility and love,” Mr. Cameron said. He then referred to the same passage in Luke that President Obama paraphrased.

The Church of England, meanwhile, was quick to criticize the prime minister’s same-sex “marriage” crusade. Marriage is between one man and one woman, the church said in response to the government’s attempt to redefine the union. In the same statement, however, the Church of England endorsed homosexuality and same-sex unions—but drew a very distinct line between that and homosexual “marriage.”

What a pathetic and weak defense of an institution ordained by Almighty God! The supposed moral authority in Britain summarized its official position on homosexuality and marriage and didn’t even include one biblical passage or scriptural reference. Not even one verse!

And we wonder why our leaders are so quick to disparage the Bible and the reputation of Jesus Christ to disingenuously defend their lawless agendas. Today’s “enlightened” clergy is far too busy figuring out how much of the Bible can be categorized as myth or hyperbole to be bothered with actually preaching the plain truth of God’s inspired Word!

What an ominous sign of the times in which we are living.

“I charge thee therefore before God,” the Apostle Paul wrote to his young assistant, his faithful minister—the evangelist Timothy. “Preach the word; be instant in season, out of season; reprove, rebuke, exhort with all longsuffering and doctrine” (2 Timothy 4:1-2).

God has charged His true ministers with the sobering and momentous responsibility of preaching the truth of the Bible. It doesn’t say preach what men want to hear or to modify doctrinal positions as societal behavior evolves over time.

“I am the Lord, I change not,” God thunders in Malachi 3:6. And His ministers must uphold and defend the sanctity and permanency of His revealed truth. Be instant with God’s truth, Paul said. That means we must stand up and fight for the truth of God!

“For the time will come when they will not endure sound doctrine; but after their own lusts shall they heap to themselves teachers, having itching ears; And they shall turn away their ears from the truth, and shall be turned unto fables” (2 Timothy 4:3-4). That is the time we live in right now. Most people today have turned away from what the Bible actually says and have accepted lies in place of truth.

What about you, dear reader? Will you accept the simplicity and purity of God’s revealed truth? You can know the truth if you are honest in your study of God’s Word and willing to submit to the Bible’s authority.

In his book The Incredible Human Potential, Herbert W. Armstrong said that God has made His revealed knowledge and truth available to anyone willing to believe what He says in His inspired book, the Holy Bible. It’s the world’s best seller, Mr. Armstrong said, “But this precious book has been interpreted and misinterpreted, distorted, twisted, misrepresented, misunderstood and maligned as no other book ever has.”

Indeed it has, which is why you must put aside what men say about the Bible and investigate the source for yourself. It doesn’t need any “private interpretation,” as the Apostle Peter wrote. God’s Word interprets itself for those who are humble and honest—and who are willing to dig in and study. The Bible says what it means—and with authority! And it means exactly what it says. Just take it as the timeless masterpiece that it is, and it will begin to make sense.

“Look into it for yourself,” Mr. Armstrong urged Plain Truth readers in February 1982. “It’s full of surprises—it’s full of truth—it’s full of the way to a positive peace of mind, to happiness, to prosperity, abundant living here and now and to salvation in joyous eternal life—forever!”