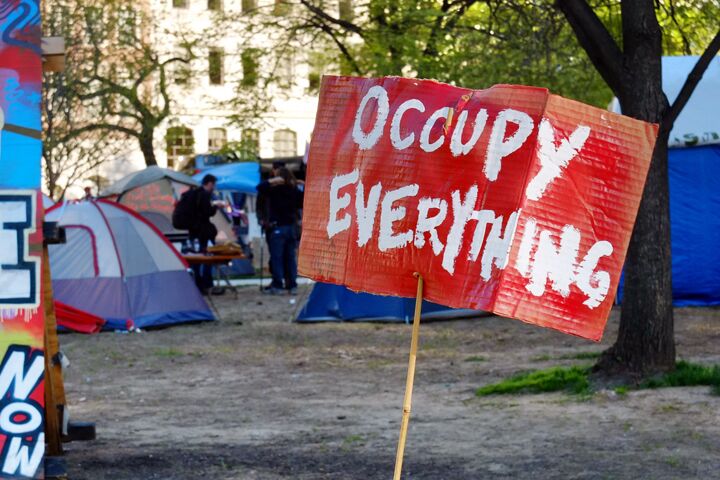 With the arrival of spring, activists across the nation are getting ready to emerge from their winter of hibernation.

As a wave of warmer weather sweeps across America, Occupy protests are again popping up in cities across the nation. Just this past week, several hundred protesters participated in a Saturday march through downtown Chicago, the National Park Service issued a cleanup notice to the Occupy DC groups in McPherson Square, and 12 activists were arrested for blocking traffic in Minneapolis.

A large subset of this up-till-now leaderless movement is even seizing the opportunity to form a more unified political front. This front, dubbed 99 Percent Spring, aims to recruit 100,000 activists and will be holding spring training sessions in all 50 states from April 9 to 15 on how to do such things as resist arrest and organize protests.

The primary leader of the 99 Percent Spring movement is currently Anthony Kapel “Van” Jones—the former special adviser on green jobs to the Obama administration. Jones resigned his post as special adviser in 2009 when Republican lawmakers called for his ouster over revelations about his past association with the radical Marxist group Standing Together to Organize a Revolutionary Movement (storm).

Since his resignation, Jones has worked with organizations like MoveOn.org to launch the Rebuild the Dream campaign, which is intended to counter the Tea Party movement and rebuild America based upon the campaign promises of Barack Obama.

In comments made to the media last month, Jones claimed that the only way to change America for the better was to first reelect Obama to the presidency and then to establish a grassroots social movement capable of pushing the government into making the demanded changes. “I think you need two sources of power to make change, and not just one. I think you need a head of state that’s willing to be moved, and a movement to do the moving,” Jones said.

Last January, billionaire investor George Soros warned of all-out class warfare as the economy deteriorates and protesting becomes more common. “Yes, yes, yes,” Soros told the Daily Beast on the subject of whether “riots on the streets of American cities are inevitable.” Soros went on to claim that the solution to such violent rioting was for President Obama to increase taxes on the rich in an attempt to solve social inequality.

While Soros is right about the inevitability of rioting in the streets, his solution would only likely further escalate class tensions. Taking money from those who own businesses and giving it those who are threatening to shut them down is not a viable solution to American joblessness.

As Occupy Protests and 99 Percent Spring Rallies proliferate across the nation, expect violent rioting to eventually engulf cities across America. The political establishment is gearing up for a presidential election campaign based on partisan division, class warfare and outright racism. The Occupy protesters are likely to become a major component of this campaign. For further information, read Philip Nice’s article “Blood in the Streets” and Stephen Flurry’s editorial “Will ‘Trayvon Martin’ Ignite Race Wars?”