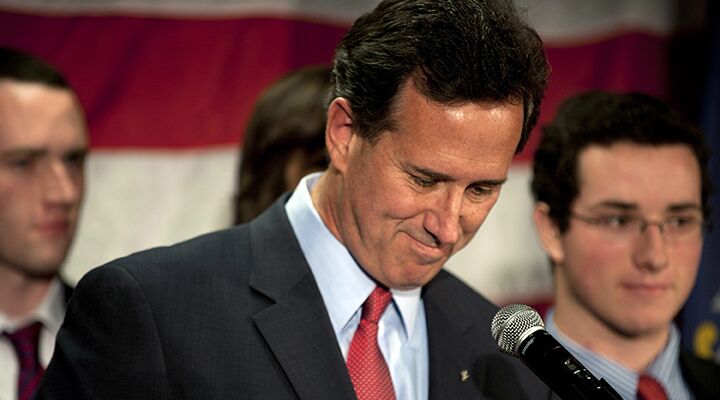 The Philadelphia Trumpet, in conjunction with the Herbert W. Armstrong College Bible Correspondence Course, presents this brief excursion into the fascinating study of the Bible. Simply turn to and read in your Bible each verse given in answer to the questions. You will be amazed at the new understanding gained from this short study!
From The May-June 2012 Philadelphia Trumpet
View Issue FREE Subscription

Satan the devil is making headlines. Recently, a 2008 speech by presidential candidate Rick Santorum resurfaced and instantly became the epicenter of a major controversy. Why? Because it mentioned Satan.

“This is not a political war at all. This is not a cultural war at all. This is a spiritual war,” Mr. Santorum told an audience of students at a Catholic university in Florida. “And the father of lies has his sights on what you would think the father of lies, Satan, would have his sights on: a good, decent, powerful, influential country—the United States of America. If you were Satan, who would you attack in this day and age? There is no one else to go after, other than the United States.”

A presidential candidate talking about Satan? Not a metaphor, but a real, living being who actually affects us and the world we live in? In the orthodoxy of political correctness, this is heresy. Liberals and even some conservatives are branding Santorum as reactionary, zany, prehistoric—“a religious nut.” Even many Christians are distancing themselves from such an idea, and almost everyone is wagging his head about what this means for the candidate’s “electability.”

But that’s not really the main point. The point is this: He said there is a devil. So—is there?

Comment: Most Americans believe there is a God; as does about one out of every two people on Earth, according to an Ipsos Social Research Institute global survey last year. So, ask someone, particularly one of the world’s 2 billion Christians—or yourself—that question: Who is in charge of this world? If you think it’s God, then you’re at odds with the Apostle Paul, who says this world’s god is someone who has “blinded the minds of them which believe not.”

Comment: Let that sink in! This is talking about someone fighting God and getting thrown out of heaven, down to Earth. It says that this being, like the one in the previous verse, “deceives the whole world ….” Why? Because it’s actually the same being: “the dragon … that old serpent, called the Devil, and Satan”! How explicit. Your Bible says the devil is very active, very evil—very real!

How exposed is a country whose leaders, shepherds and critics scoff at even the suggestion of his existence? Answer: The Prophet Isaiah said this great fallen archangel “didst weaken the nations!” (Isaiah 14:12).

Comment: This is the story of the world’s founding father and mother. God had given Adam and Eve a command. Then He allowed the devil to come along, in the form of a serpent, and test their obedience. The serpent enticed Eve to step away from God, out on her own. She observed the situation, used her own reasoning, decided for herself what was right and wrong, and then experimented, breaking the command (verse 6).

Does that sound familiar? Do you know someone who believes it is his inalienable right to decide for himself what is right and wrong? Do you believe that? It’s not just you or your friends, it’s everyone in the world: smart, simple, rich, poor, religious, agnostic, atheist. This is one of humankind’s most universal beliefs: We decide what is good and evil. But think back. Who was it that sparked this idea? That old serpent! (verse 1).

Comment: Did you know that Satan the devil is mentioned more than 30 times in the Gospels? These four books are biographies of the life of Jesus, and they record that He taught about, described, warned against, and even spoke to Satan! Matthew 4 reports an epic showdown between Jesus Christ and Satan the devil. What was this faceoff about? Satan was trying to get Jesus to do the same thing every other human has done: observe the situation, use His own reasoning, decide for Himself what was right and wrong, and experiment (verses 1-7). What does this ultimately amount to? Worshiping Satan! (verse 9).

Don’t overlook verse 8. Who was the one to offer his enemy “all the kingdoms of the world”? Satan, not Jesus. He was the god of this world, and Jesus did not deny that. In John 12:31 and 14:30, Jesus actually calls the devil “the prince of this world.”

However, unlike Adam and Eve, Christ defeated Satan in that harrowing battle. How? By submitting to God and obeying His commandments (Matthew 4:4, 7 and 10). Don’t try to tell Jesus Christ that the devil is a metaphor!

Why Do We Do What We Do?

1. How come we don’t feel like we are being influenced by Satan? Ephesians 2:2.

Comment: It’s very easy to associate Satan with a little caricature standing on one shoulder, or as an influence that is obviously insidious and easy to detect because it is so dark and evil. But Satan is actually much more subtle—and much more effective—than that. “The prince of the power of the air” transmits his influence much like radio waves or cell phone signals, except he broadcasts attitudes, moods and emotions: pride, competition, strife, envy, vanity and, most of all, selfishness.

2. What does the prince of the power of the air influence humans to do? John 8:44.

Comment: We want to believe that human nature is basically good. But look at this world—all of it! Think about what happened to the busload of people described in the cover story of this issue (page 4). Think of the violence choking Syria right now, or even within the inner cities of many urban areas in the West. Think of the many millions who are suffering severe deprivation and abuse because of corrupt government. Think of gang warfare and tribal conflict. The evidence is everywhere that the god of this world is “a murderer from the beginning”!

Consider too the many other, more subtle ways that man manifests his evil nature. We are ignoring each other, taking advantage of each other, stealing from each other, lying to each other, abusing each other, torturing each other. “The father of lies” guides us—sometimes very subtly—to be greedy, to be arrogant, to be thankless, to be self-righteous and selfish. We can see Satan’s influence when we look at the world and see hateful partisans, unjust judges, corrupt lawmakers, bloody warlords, horrifying criminals, and so much more heartbreaking wickedness. But do we realize that this is the same selfish evil that is inside each of us?

Never forget, we are living under a reign of terror: the administration of the god of this world. Everyone has absorbed his attitude of “self is right.” With that terrible wedge hammered hard in between us and God, we are left prone to all of Satan’s other hurtful influences, many too heartbreaking to mention. This suffering world is proof.

Comment: The verse compares the devil to a roaring lion searching for victims to devour. It also tells who Satan is: “your adversary.” In every way, on every level, this wicked being is our enemy! He wants to destroy our relationships with God and to murder us spiritually and physically. The Bible warns us: “Be sober, be vigilant.” See also Luke 22:31.

Comment: Caricatures of the devil based on Dante’s Inferno conjure images of a grotesque red creature with fangs, horns and a pointy tail. Even if you don’t imagine Satan that way—if you believe in the Satan of the Bible at all—you probably imagine someone who is visibly and obviously evil incarnate. But this passage says that he transforms himself into “an angel of light.”

Satan’s influence can seem innocent, even good sometimes—especially to people who rely on themselves to discern what is right and wrong. Revelation 2:9 says that you can even think you’re worshiping the true God—and actually be worshiping Satan! The only way to defend against this powerful enemy is to trust and obey someone more powerful: God.

Satan has tools he has used over and over. He takes advantage of our weaknesses, especially our vanity! When we self-righteously refuse to admit that we don’t know right and wrong of ourselves—when we fail to submit to God in order to seek both His wisdom and His protection—we make ourselves extremely vulnerable!

But we don’t have to be blind to what the god of this world is doing. There is a way to remove our ignorance of Satan’s devices. There is a way to understand the truth. The first and most important step is to pierce through the deceit Satan relies on more than any other: the lie that he doesn’t exist.

God’s Word—and our world—is full of the proof. Satan does exist! That is the truth of your Bible!

You need to know more about “your adversary the devil.” Can you prove he is real? How pervasive is his influence? Did God create a devil? To receive satisfying, thorough scriptural answers to these fundamental questions, request a free copy of Herbert W. Armstrong’s book Mystery of the Ages and study Chapter Two, “Mystery of Angels and Evil Spirits.”