A powerful, genuine example of peace was given to this world for a tiny period. When you see how people reacted, you can understand why this world has no real peace. Nevertheless, we are about to have world peace in spite of man and his human nature. 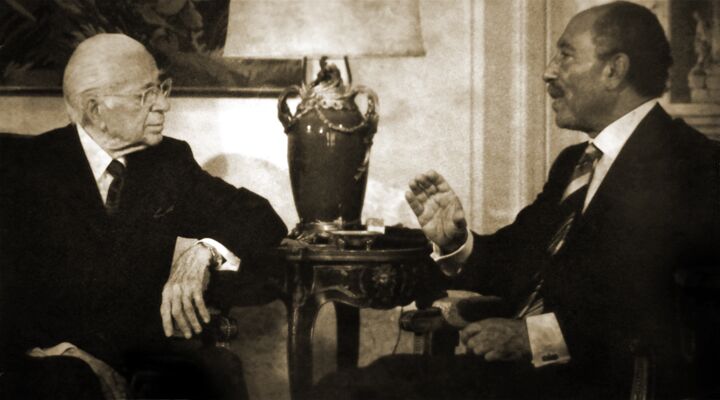 A powerful, genuine example of peace was given to this world for a tiny period. When you see how people reacted, you can understand why this world has no real peace. Nevertheless, we are about to have world peace in spite of man and his human nature.

Look at the list of world leaders Herbert W. Armstrong came into contact with, and who responded warmly to him. They called him an ambassador for world peace. That is a miraculous understanding, when you realize that he had that kind of an impact on the leaders of this evil world.

Mr. Armstrong did restore the way of peace to God’s Church. He also, momentarily, restored that to the whole world as well, I believe. He was part of a project that, if fully understood, showed the world how to have peace!

One of the most dramatic examples of Mr. Armstrong’s efforts to promote peace in this world revolved around the construction of a world peace center. What truly made this extraordinary was the fact that it was promoted by perhaps some of the most unlikely individuals—and at probably the most significant, profound location it could possibly inhabit on Earth.

Mr. Armstrong wrote about this peace effort in Quest/81. “For too long, leaders have dealt with effects, ignoring the causes of our problems,” he wrote. “It is imperative that they come to a knowledge of the way that will produce peace. President Anwar L. Sadat of Egypt may be pointing to that way” (May 1981).

In this article, Mr. Armstrong listed several significant events that converged in this historic peace initiative. Among them was Sadat’s visit to Jerusalem, which Mr. Armstrong called the most incredible peace overture of modern times. “After four bitter wars against Israel in 30 years, President Anwar el-Sadat did an unheard-of thing! On Nov. 20, 1977, he declared peace, not war!”

What a sacrifice this man made! Virtually the entire Arab world harbored intense hatred for the Jews. Yet Sadat traveled right to the heart of the Jewish state and spoke to the Knesset in Jerusalem. These nations were at each other’s throats. Then suddenly, this courageous man had a change of heart. President Sadat extended an offer to the Israeli prime minister, Menachem Begin, who accepted. Sadat came before the Knesset and said, “You would like to live with us in this region of the world, and I tell you in all honesty that we welcome you among us.”

Perhaps he didn’t fully realize how much hostility that move would create, but from that point forward he was a marked man. He had an ambulance following everywhere he drove because he knew a lot of people wanted to kill him. His trip to Jerusalem even triggered assassinations of other Egyptian dignitaries.

Is that not a sacrifice for peace? This man was most unusual. Anwar Sadat became one of a few great leaders in this world. He sacrificed his life for true peace. That is the sign of a great leader!

How many such men do you see in this world?

Mr. Armstrong called that a “genuine peace offer”! That was what launched the peace process. But nothing we have seen since has even come close to the sincerity and praiseworthiness of that initial effort.

In the past, I have criticized Israel for accepting that offer from Sadat. But after studying into it more—and particularly after looking at how Mr. Armstrong responded to it—I am convinced that this really was a valiant and laudable peace effort, and I even believe that, to some degree, God’s hand was in it.

Sadat went to Jerusalem to declare peace. And it worked quite well, right up to very recently, as far as Egypt and the Jews are concerned.

In this Quest/81 article, Mr. Armstrong wrote about a specific idea that Sadat had: “He plans to build at the base of Mount Sinai a world peace center, emblematic of peace among all nations and religions” (emphasis added throughout). The magazine included an artist’s drawing of the proposed edifice, and it had a church building, a mosque and a synagogue.

“The concept is unique! A total departure from any previous peace undertaking,” Mr. Armstrong wrote. This effort showed these two nations’ “extreme willingness to give extraordinary sacrifice in the start toward peace in their region.”

When Mr. Armstrong heard of Sadat’s proposal, he immediately donated a hundred thousand dollars, as down payment on a total pledge of one million dollars. Obviously Mr. Armstrong knew they weren’t going to solve the problems and have peace in the world. He knew the prophecies—that this world will end violently, and true peace can only be achieved once the Prince of Peace returns. Still, he did all he could to represent peace and to promote peace in this world, and he demonstrated his strong desire that all men work toward that end today.

God’s apostle saw real vision in this project, and saw what it could do to point people in this world toward real peace.

President Sadat’s thoughts on the peace center are quite inspiring. “It will be a living symbol of the brotherhood of man, a lighthouse that will rekindle the spirit of coexistence and tolerance among nations,” he said when he announced the project. “As we look at the world today, we realize the great need for a reminder of the oneness of human destiny and the continuation of the divine mission, which is in essence, a great act of mercy. This monument must light the path of the generations yet to come.”

What a noble plan in this ignoble world!

I believe this project was special because God’s apostle was a part of it. What other peace agreement have you ever heard about that is comparable to this? Mr. Armstrong saw that, and he wanted to encourage President Sadat in these efforts. He was called the ambassador for world peace without portfolio. He really was a man of peace! He knew how to have peace! And he knew that Sadat was on to something really big in this world. I believe Mr. Armstrong’s involvement was God’s way of saying, This is an act of peace by a true peacemaker. You need to support him and help him and be a part of this. Leave that at least as an example. And what an example Anwar Sadat was to the world, and Mr. Armstrong as well.

During the Millennium, God is going to force the Egyptians to come up to Jerusalem (Zechariah 14:17-19). At that time, they’re going to recognize what Mr. Armstrong saw: that Anwar Sadat was a great man.

This world is about to explode into World War iii, and here was a man, Anwar Sadat, who made a peace effort in a grandiose way, and made himself a target in doing so. At a time when the number one problem was and still is human survival, you would think people would be scurrying to find any peace plan that might avert that greatest of all tragedies, the snuffing out of all human life. That is what Christ said would happen if He didn’t return (Matthew 24:22).

This small slice of history left us a vision of imminent peace in this world. We are about to have peace fill this Earth, which has a bloody history of warfare.

The Sadat-Begin-Armstrong peace project left us a message of soaring hope in a hopeless world!

‘Them That Make Peace’

On Oct. 6, 1981, Anwar Sadat was assassinated by his enemies—including members of the Muslim Brotherhood, the very organization getting control of Egypt today. God allowed Sadat to be killed and that peace center to die. If nothing else, this gave the world a condemning example of how it hates the way of peace even on a letter-of-the-law level. What a witness against it!

People need the Holy Spirit of God to heal their minds—and soon God is going to give it to them. Jesus Christ died so they might have the Holy Spirit to cleanse their thinking and truly forgive people for what Satan did to them.

Don’t the nations today need peace? We are in a period of time just before “the great and dreadful day of the Lord.” God is about to give us peace forever, but it is preceded by the worst suffering ever on this planet. God wants us to remember and escape the Tribulation and the Day of the Lord. However, most people just scorn God’s warning message.

I truly believe that, for a moment, Mr. Armstrong really did restore the way of peace to this Earth! He knew the way of peace, and he knew and taught about the God of Mount Sinai. If you bring this God into your life, you will have peace! If you have all parties looking to this God, how could you not have unity and joy?

Mr. Armstrong taught the world the way of peace, and it was and still is a prelude to world peace! Not just peace for one church or one state or one nation—God is about to bring world peace! What a beautiful thing that is!