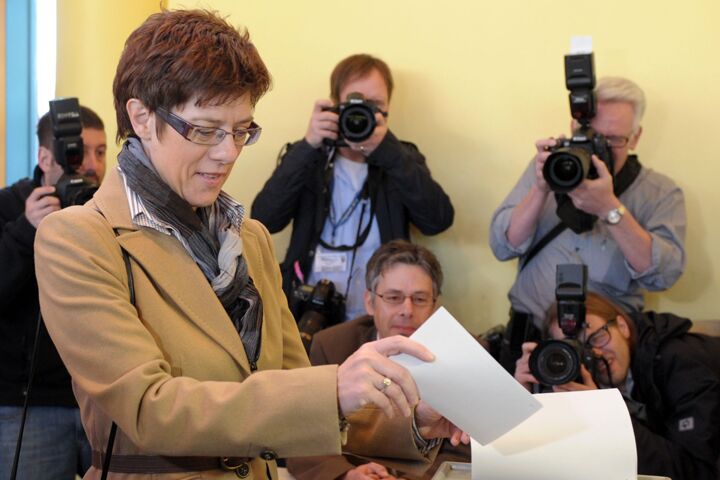 Moves are afoot within Germany to justify the changing of national and state borders.

Two events in Germany recently highlighted moves being considered by the government mooting changes to Germany’s national borders and also changes to its own federal state structure.

Being aware of the strong centralist tendencies of the German mind and also the Bible prophecy relating to Germany’s ultimate—though short-term—destiny to head 10 regional powers in Europe, we have long anticipated these developments.

One of the major considerations in respect of postwar Germany is the fact of the German League of Expellees (Bund der Vertriebenen—BdV) refusing to recognize Germany’s eastern borders as established by the 1945 Potsdam Agreement. This powerful lobby group claims that the resettlement of Germans from east of the Oder-Neisse river was unjust. Their position has powerful support in Berlin.

German-Foreign-Policy.com observes that “indemnities asked for by the League of German ‘Expellees’ can be linked to an old law of the Federal German State, which leaves ‘property questions’ systematically open. This has further been exacerbated by the claim by chairman of the German-Polish Society of the Federal Republic of Germany, Prof. Dr. Christoph Koch, that ‘Even the German-Polish border is confirmed only by a Border Confirmation Agreement’” (March 26).

Professor Koch maintains that, as of the current date, the unconditional recognition of Germany’s border with Poland has never been concluded. If this is the case, it leaves the situation wide open for Germany, by far the stronger regional power in Europe, to pursue a change to its eastern borders with a compliant Polish leadership.

During last week’s opening of the exposition of the “Home Nostalgia” conference of the League of Expellees in Berlin’s Crown Prince Palace, the presence of Chancellor Angela Merkel appeared to give implicit support to claimants for indemnity due to their expulsion from the pre-1945 territories occupied by Germany. This is in conformity with consistent Christian Democratic Union, Christian Social Union and Free Democratic Party policy that has backed claims for property indemnity for Germans forcefully repatriated from their properties east of the Oder–Neisse line since the time of the Adenauer government. It also synchronizes with the regular stance of conservative governments in Germany for moves to reclaim former German possessions east of that line, or to move the Polish border back to its pre-Potsdam Treaty status.

In parallel with the challenge to the legitimacy of Polish takeover of former German property and territory, the regularly raised voices of the Sudetenlanders for similar indemnity due to the forceful repatriation of German ethnics from former German-occupied Czech territory are becoming more strident. At the forefront is Bavarian statesman Edmund Stoiber’s wife, a former resident of Sudetenland. She is avidly supported by her husband in the quest for indemnity or a reversion to the pre-World War ii German-Czech border.

At the same time that the BdV cause is being given fresh support from Berlin, calls are being made within Germany for changes to its own state borders. In the wake of recent elections in Saarland, “On Sunday, the citizens of the western state of Saarland went to the polls. The small state has one of the highest debts in Germany, and some politicians think the solution is to merge states and centralize government” (Deutsche Welle, March 25).

While Germany’s federal structure and its division into separate states is enshrined in the nation’s constitution, it does not define any particular number of states per se.

“Indeed, there is an article in the constitution which allows for the reorganization of states according to certain rules. Among the conditions is a referendum for the concerned states. This has happened only once in the country’s history, when the states of Baden, Württemberg-Baden and Württemberg-Hohenzollern combined to form the state of Baden-Württemberg” (ibid, March 26).

Thus a historic precedent exists upon which an argument may be built for the further centralization of government in Germany by reducing the number of currently existing states. Such a move in the future would certainly streamline the administration of German political power, allowing it the administrative room to concentrate on welding together an international combine in Europe under Berlin’s control.

The book of Revelation, chapter 17 and verse 10 prophesies of a time to come when 10 kings, acting in complete concert, yield up their “power and strength” to one overarching power called “the beast.” At present, the European Union, a Franco-Germanic creation in the spirit of the Frankish Emperor Charlemagne, consists of 27 nations, with even more aspiring to be added to its monolithic structure. It is not beyond the realms of possibility that this unwieldy European Union, with its current concept of regionalization already in vogue, could change or even do away with certain national borders to achieve a more cohesive 10-region combine consistent with the Bible prophecy of its ultimate political structure.

Watch for more calls for the centralization of administration of German governance, domestically, and of the EU, internationally. These are but signs of the inevitable prophesied outcome of emerging Germanic power in Europe. Power of a nature that your Bible prophesies will even be turned against the King of kings upon His imminent return to put down all governments and finally impose peace and security globally (Revelation 17:14; Isaiah 9:6-7).