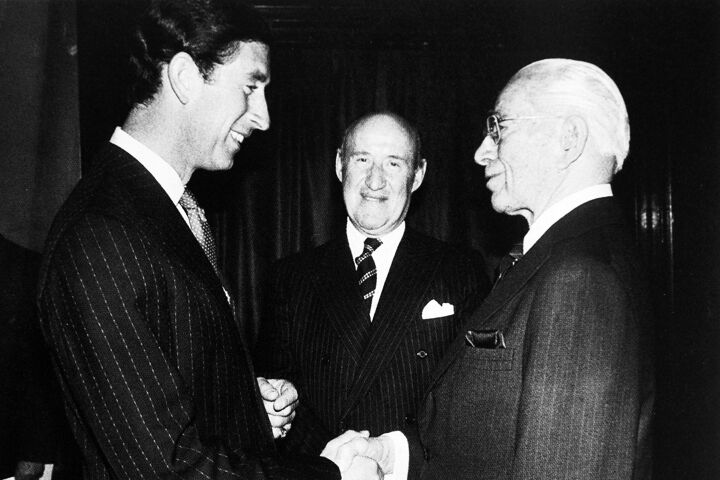 The music of Handel, Mozart, Tchaikovsky, the works of Verdi and Shakespeare, the voices of Dame Joan Sutherland and Luciano Pavarotti, performances of Swan Lake, The Nutcracker, Sleeping Beauty and countless other notable works have graced the stage of the Royal Opera House in London’s Covent Garden. This spectacularly historic architectural masterpiece traces its history as far back as 1728. Twice it was burned to the ground and rebuilt during the 1800s. It was used as a mecca for dancers during World War ii, and, more recently, under Her Majesty Queen Elizabeth’s guidance extended, renovated and reconstructed.

It was here in Covent Garden, scene of song, music, theater and dance over almost three centuries, that the heir to the British throne would join illustrious company as he smiled, shook hands and conversed with the man who had met with more heads of state and leaders of government than any other on Earth. The meeting came a year after millions of readers of the Plain Truth magazine worldwide received an edition featuring a cover photo of the Prince of Wales, captioned “Heir to a Sacred Line of Sovereigns,” promoting an article titled “The Real Value of Britain’s Royal Family.”

The Worldwide News, Aug. 2, 1982, recalled that on “Monday, July 19, Mr. Armstrong attended the opening of the new extension to the Royal Opera House in London. After touring the new facilities there, Mr. Armstrong joined about 250 other dignitaries present for an address from Prince Charles.

Plans for a second, more formal meeting following their warm handshake during the peace and calm of their initial meeting were to be abruptly interrupted. Neither the Prince of Wales nor Herbert Armstrong were to know of the horrific tragedy about to unfold the very next day. Terrorists planted two explosive devices in the city. The first blast came in Hyde Park, injuring 23 bystanders and killing two soldiers and seven royal horses. The nail bomb exploded precisely as the Queen’s official body guard regiment, the Household Calvary, prepared for the changing of the guard between their barracks at Knightsbridge and her residence at Buckingham Palace.

The second blast came from under Regents Park bandstand as an audience of over 120 listened to the Royal Green Jackets play selections from the musical Oliver. The explosion killed six soldiers and injured 24 civilians.

The bbc News reported, “The ira admitted carrying out the attacks in a statement echoing Margaret Thatcher’s declaration of war on Argentina over the disputed Falklands. It repeated her phrase about the right of self-determination and continued: ‘The Irish people have sovereign and national rights which no task or occupational force can put down.’”

Prince Charles planned to attend the military funeral on Thursday morning and as such he moved the meeting to 9:30 Friday. However, the prime minister already had a scheduled meeting with Mr. Armstrong for 10:30 a.m. that day. In the interim, Prime Minister Margaret Thatcher and her Irish counterpart Garrett FitzGerald mutually condemned the deadly blasts to the stunned public.

“Late Thursday morning, the prince’s secretary called again, requesting another postponement. He explained that the prince was deeply saddened by the funeral. Seven of the men were married, one only four weeks before the tragedy. The secretary mentioned that the prince decided to leave London for a while, and that all of his appointments were cancelled. Mr. Armstrong hopes to reschedule a meeting for a future trip” (Worldwide News, op. cit.). The horrific incident underscored the animosity between biblical Ephraim and Dan, highlighting God’s prophesied appointment of terrorism on them as a result of national disobedience to His law (Deuteronomy 26:16).

Beyond the terrorists bombs, the second meeting never eventuated. However, with the Covent Garden meeting, God had already ensured that today’s heir to the British throne had met His representative of the day who was preaching, as a witness, the royal gospel of the good news of Christ’s Second Coming to an already existing throne (Matthew 24:14; Luke 1:32-33).

William Shakespeare’s Tragedy of King Richard II has been performed on the stage of the famed Royal Opera House in Covent Garden. In that play, John of Gaunt gives a most memorable speech about England. Among his words are the following: “This royal throne of kings, this sceptered isle …. This blessed plot, this earth, this realm, this England. This nurse, this teeming womb of royal kings ….” Shakespeare’s prose recalls the inspired quill of the Prophet Jeremiah which the Authorized King James in chapter 33, verse 17, notes, “For thus saith the Lord; David shall never want a man to sit upon the throne of the house of Israel.” It was from Mary’s very womb that Jesus Christ, of the seed of King David—to whom the present Queen, Elizabeth ii, can trace her direct ancestry and thus that of her firstborn son, Prince Charles, as well—was born to sit on the same throne as today’s ruling British monarch, to establish of His everlasting Kingdom of peace forever (Luke 1:30-31).

The Prophet Jeremiah also noted, “Neither shall the priests the Levites want a man before me to offer burnt offerings, and to kindle meat offerings, and to do sacrifice continually” (Jeremiah 33:18). Thus today, as the Scripture cannot be broken (John 10:35), there must be one who continues to lead in that role, in its New Testament sense, preaching Christ the ultimate sacrifice and expounding the words of the prophets (2 Peter 1:19) prophesying Jesus Christ’s return.

That individual will be continuing to perpetuate the legacy of the one who came and restored all things to the Church (Matthew 17:11), one who moved among world leaders, prime ministers, presidents and monarchs, including the future monarch of Britain, as a witness of the King of kings and His Kingdom to come. His will be an even more intensified warning involving a commission to “prophesy again about many peoples, and nations, and tongues, and kings” (Revelation 10:11).

That message of sounding the mystery of the ages to the world pictures a wonderful utopian world to come, heralding the soon-coming establishment of a godly, peaceful royal rule, and as the prophecy in Isaiah 35 envisions, a world where the deadly blasts of terrorists bombs are to be replaced by the royal harmony of joyful song and dance forever.