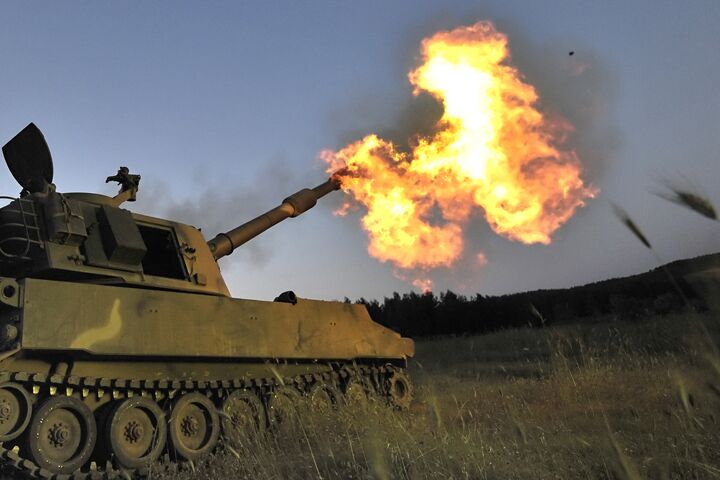 Even as the Greek economy continues its agonizing collapse, with the nation struggling to submit to extreme austerity measures being enforced by its masters in Berlin, the nation’s unelected technocratic government is overseeing a giant fiddle of the books involving the channeling of bailout money into the coffers of Germany’s armaments industry.

Greece lives under a permanent military threat from its huge neighbor on the Anatolian peninsula, Turkey. The Turks taunt their smaller neighbor across the crucial Bosporus sea gate, daily violating Greek airspace with their fighter jets. Tensions are made worse by continuing disputes over Greek sovereignty attached to certain islands in the Aegean. To counter Turkey’s aggression, Greece has spent huge amounts on defense budgets—as much as 4.3 percent of gross domestic product, proportionately the highest among the EU nations.

Who has been the greatest beneficiary of this defense expenditure? The major supplier of defense equipment to Greece: the German armaments industry.

How much have EU elites actually manipulated ongoing Greek-Turkish tensions for the advantage of the European Union’s thriving defense industries? As one Greek source observed: “In this volatile game of geopolitics, the bosses of Euro ‘family’ have always been playing the major role in cultivating and manipulating an unguaranteed stability in the area, thus creating market conditions for their influential military industries to flourish. German defense corporations in particular have been major contractors with the Greek (and Turkish) army for more than two decades” (Antibaro.gr, Nov. 29, 2010).

The facts are that Greece’s coffers have been substantially drained into huge profits for German defense industry barons. This includes multibillion-euro contracts for Greece to purchase big-ticket military hardware ranging from tanks to missiles to naval vessels, including submarines.

“All these sum up to hundreds of billions of euros and, under other circumstances, could have been more than enough to balance the Greek budget deficit and even drastically alleviate the external debt,” that same Greek source observed. “One thing is for sure, those billions were added to the profits of German industrialists, bankers and intermediaries.”

Since that report came to light, the Greek economy has been brought to the brink of catastrophe, with the prospect of inevitable default on its debts being very real by the end of the first quarter of the current year.

The saving grace for Greece may well be the degree of influence that German defense industry corporate elites and their bankers have in terms of convincing the International Monetary Fund and the European Central Bank to cough up another tranche of euros in their interests. An unnamed source is quoted by German news source Zeit Online as observing that “If Greece gets paid in March the next tranche of funding (€80 billion is expected), there is a real opportunity to conclude new arms contracts” (January 5).

Zero Hedge reports that, “after the Portuguese (another obviously stressed nation), the Greeks are the largest buyers of German war weapons.” The same source contrasts this huge expenditure by Greece on armaments amid the general state of the Grecian economy, with “the country’s doctors only treating emergencies, bus drivers on strike, and a dire lack of school textbooks and the country teetering on the brink of drachmatization …” (January 9).

When the EU was threatened with the collapse of the Greek economy, German defense industry chiefs held the Greeks’ feet to the fire. Rather than cancel out on existing contracts, permitting the release of funds to support basic services within the ailing Greek economy, the German government defense contractors enforced Greece’s contract obligations.

The effect of this scenario has been that Greece is treating as a priority the payment of its obligations to the German armaments industry using the very bailout funds received to ostensibly revive its dying economy.

Once again, as Spiegel Online points out in its January 10 edition, “Its neighbors may be suffering, but the euro crisis has created conditions that actually benefit the German economy.”

The fact that the European Monetary Union was constructed by certain elites to achieve this very effect has escaped most observers. Yet we have consistently reported on this fact, well before the current euro crisis. A quick check of our voluminous archive of articles on the euro project, its beginnings and its outcome will reveal this undeniable fact.

It’s time that you educated yourself in just what is really happening in Europe today, its sinister beginnings and its rather fearful outcome.

Study our booklet Germany and the Holy Roman Empire for the facts behind this incredible deceit, its immediate and its long-term future.