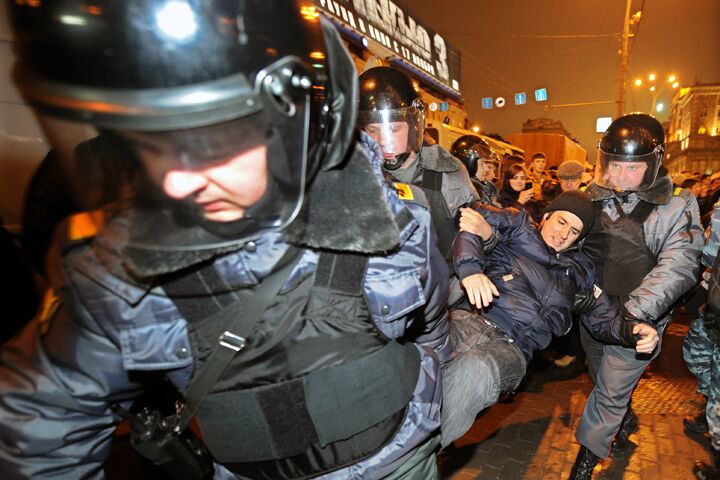 Many Westerners say Putin’s wings were clipped by Sunday’s parliamentary elections and the subsequent protests. But what are the true implications?

The Kremlin deployed over 50,000 Russian security forces in Moscow for the third day on Thursday to counter several thousand protesters who have been demonstrating there since Monday in response to reports of voter fraud in Sunday’s parliamentary elections.

The months leading up to the vote have been tense. In September, Russian Prime Minister Vladimir Putin and President Dmitry Medvedev announced that they would swap places in March, returning the presidency to Putin. The announcement soured the mood of some Russians, and the popularity of United Russia, a political party created in 2001 to support then President Putin, began sliding. The force behind United Russia’s decline is an anti-corruption Internet campaign based on a slogan coined by campaigner Alexei Navalny, who called it “a party of crooks and thieves.”

The Kremlin appears to have panicked. On election day, there were denial-of-service attacks on the country’s prominent media outlets and on LiveJournal, Russia’s most significant blogging platform. Election observers also reported that ballot box stuffing and other irregularities were widespread during Sunday’s election, mostly to the benefit of United Russia. For example, United Russia reportedly received nearly 95 percent of the votes from Moscow’s mental hospitals.

These reports infuriated some Russians and prompted around 10,000 to take to the streets of central Moscow on Monday in protest. More than 1,000 protesters have been arrested so far, including Navalny.

Even with the help of vote rigging, United Russia saw a drop in support from 64 percent in 2007 to around 49 percent on Sunday. But, despite attempts by Western powers to point to the election results as proof that Putin’s political strength is deteriorating, the outcome will do little to loosen his grip on Russian power.

On Monday, U.S. Republican Sen. John McCain offered Putin his interpretation of the protests on Twitter, saying, “Dear Vlad, The Arab Spring is coming to a neighborhood near you.” McCain’s assessment represents a naivety common in the West, which was also demonstrated by the early Western perceptions of the “Arab Spring.” The Western media is infatuated with words like democracy and revolution, and leaders like McCain view the protests in Russia as a sign that seeds of democracy are germinating there. Such a perspective is naive and oblivious to history. A few thousand protesters in a historically authoritarian state like Russia, where democracy has never really taken root, means little.

Western observers who take this view also ignore or downplay the fact that many of the protesters in Moscow’s streets are pro-Putin. Reports say that “thousands” of the demonstrators are there to celebrate the United Russia party’s victory. “Russia! Russia!” they chanted, and “Russia! Putin!” and “Medvedev! Victory!”

Stratfor points out that other Western analysts view the protests as an opportunity to portray Russia as a deteriorating country, and Putin as a weakening leader (December 6):

[D]espite United Russia still holding onto majority power, Western media has been calling these elections a major hit to Putin’s power. … But what the West is trying to push is the idea that Putin is not as strong of a leader as he was in the past—true or not. The West (especially the U.S.) has to push this idea because Putin is set to return to the Russian presidency in March. Putin’s return has set many countries on edge—particularly those that are on the front line between Russia’s sphere of influence and the West’s, mainly Central Europe. The U.S. is looking to guarantee that it is still a strong partner to protect those countries—but with many physical guarantees (like missile defense) still years away, the U.S. is currently looking to ensure that Russia isn’t as strong as may be perceived. And in order to do this, the U.S. is hitting at the perception of Putin and his hold over his own country.

As prime minister for the past four years, Putin was never out of the picture. But his looming return from de facto rule to official rule presents a stark challenge for which Western nations, especially the U.S., are ill-prepared. As president, potentially all the way until 2024, Putin has one overarching goal: the development of a third, post-tsarist, post-Soviet Russian empire. If Westerners could convince Eastern and Central Europeans that Putin’s grip on Russia is loosening, then they could marginalize Moscow’s influence in those nations and bolster their own sway in the region. But these efforts are not likely to succeed.

In reality, Putin’s wings were not clipped by the election, because none of the three parties that Putin’s party lost votes to present actual “opposition” to United Russia and its nationalist political platform.

Following United Russia with 49 percent of the vote were the Communist Party (CP) with 20 percent of the vote, the Liberal Democratic Party (ldp) with 12 percent, and A Just Russia with 13 percent. It is true that United Russia’s performance was down, but most of its decline was translated into boosted support for the Communists and the ultra-nationalist ldp, which rarely vote against United Russia. The CP has followed United Russia on almost all foreign-policy issues, including Moscow’s 2008 war with Georgia and opposition to the broadening of nato’s anti-missile shield. The ldp shares United Russia’s vision of a powerful and anti-Western Russia. And A Just Russia expresses full backing and even admiration for Putin. CP and ldp leaders have promised cooperation with United Russia on many issues—even using terms like “coalition.”

Also significant is that the parliamentary election was far from a direct vote against Putin. Despite criticism of United Russia during recent months, both supporters and opponents credit Vladimir Putin with restoring Russia’s standing in the world following the chaos of Boris Yeltsin’s 1990s, and polls show that, if presidential elections had been held on Sunday, a clear majority would have cast their ballots for Putin.

All Part of the Plan, Comrade?

Stratfor said on Tuesday that the blow United Russia sustained in the vote was “orchestrated as part of a large smoke-and-mirrors campaign called ‘managed democracy’ in which Russia’s election system and parliament look more democratic, while Putin still holds full control behind the curtain.”

For most any other nation, that assertion would sound like a conspiracy theory. But this is Russia, and Putin appears serene about the election and protests. On Tuesday, he said he was “satisfied” with his party’s performance despite its having lost a number of seats. On Thursday, he accused the United States of paying Russian poll monitors to spark the protests, a move representative of his tried-and-true political trick: hyper-nationalism that pits a prideful, beleaguered Russia against a harsh, U.S.-led global conspiracy. Putin also said the Kremlin needs to “think of ways to tighten accountability for those who carry out the aims of foreign states to influence domestic political processes.”

On Thursday, President Medvedev said the alleged vote rigging should be looked into, but made plain that Moscow had no intention of annulling the election.

Tuesday and Wednesday, the number of protesters dwindled to around 3,000, but organizers are aiming for a mass demonstration this Saturday. It is evident that some Russians are weary of Putin, but it is not a large enough percentage to rattle the ruling class. If necessary, the Kremlin will break out the water cannons, tear gas and rubber bullets. The protesters look resolute, but as foreign affairs authority Tim Marshall wrote on Thursday, “there does not appear to be enough of a fire burning in enough of them to take on the strong man of the Kremlin as we approach the depths of a Russian winter.”

We should expect more demonstrations, maybe even some rioting and heartfelt calls for democracy from some voters, but the dissatisfaction will not be enough to foster revolution. Despite a drop in United Russia’s popularity, and despite the protesters taking to the streets, March’s election will be no contest.