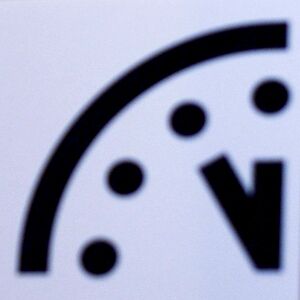 Doomsday prophets aren’t the only ones saying grave things about the world today.

Even to the casual observer, this world has withstood a series of profound crises in the last few years. At the end of 2004, just seven years ago, a devastating earthquake rocked the Indian Ocean, triggering a massive tsunami that wiped out 230,000 lives in Indonesia. Nearly a quarter of a million people were swept out to sea.

In July 2005, radical Islamists bombed the London underground rail system, killing 56 people; injuring 700. A month later, Hurricane Katrina plowed into the Gulf Coast, killing more than 1,800 people. It was the deadliest hurricane to strike America in more than 75 years.

We also witnessed a change of power in the Vatican in 2005. The new pope, Benedict xvi (Joseph Ratzinger), was the man the Trumpet had correctly predicted.

In August 2006, Iran started the Second Lebanon War by orchestrating the kidnappings of Israeli soldiers.

In December 2006 we saw a radical turn in U.S. politics with the midterm elections. At the time, we wrote, “You don’t need deep biblical understanding to realize that something is dreadfully wrong in this country. America is being cursed!”

In September 2007, Israel bombed Syria’s nuclear facility. Some analysts said this nearly started World War iii! There was the Hamas takeover of Gaza in June of 2007. And then the National Intelligence Estimate of December 2007, which signified, as we wrote at the time, “a nation-destroying change in American foreign policy.”

In 2009, the new leadership in the United States spent the year courting its traditional enemies while at the same time sticking it in the eye of our allies. Israel went to war with Hamas in Gaza, Iran crushed a democratic uprising called the Green Revolution, and the Lisbon Treaty became Europe’s new constitution! That same year, Europe was rocked by a financial crisis, which opened the way for Germany to ride to the rescue.

In 2010, for all intents and purposes, Iraq fell to Iran—something we have been predicting for years. The U.S. dollar came under assault. America’s strong traditional ties with Israel unraveled. Britain surrendered its military sovereignty. And then there were the natural disasters: Last year, more human beings died in natural disasters than any other year on record! The Associated Press called 2010 “the year the Earth struck back.”

This year, Bible prophecy has accelerated in spectacular fashion—particularly in the Middle East and Europe.

These are not normal times! “Time was,” Herbert Armstrong wrote in Are We in the Last Days?, “when some wild-eyed freak shouting a ‘doomsday’ warning was ridiculed as ‘off his rocker.’ But today serious world leaders and scientists are saying grave things about the current drift in world conditions.”

In Matthew 24, the disciples asked Jesus Christ what would be the sign of His coming and of the end of the world. Notice the first and most important warning Christ gave: “Take heed that no man deceive you. For many shall come in my name, saying, I am Christ; and shall deceive many” (verses 4-5).

This religious deception is the first horseman of the apocalypse! And this isn’t referring to deception coming from non-Christian religions. Jesus said many people would be deceived about His message—about what true Christianity really is.

Christ continued in verse 14, “And this gospel of the kingdom shall be preached in all the world for a witness unto all nations; and then shall the end come.”

The word end here is not the same as the Greek word used for the end of the age (see verse 3). Thayer’s Lexicon defines the word end in verse 14 this way: “In the Greek writing, always the end of some act or state, but not the end of a period of time. … What end is intended the reader must determine by the context.”

So what really ended? When the gospel was preached around the world as a witness, then that work ended. It was the end of the Philadelphia era and the beginning of the Laodicean era in God’s Church (Revelation 3:7-20). A man came and finished an end-time work (Zechariah 4:9). Then he was taken out of the way (2 Thessalonians 2:7). For more on this subject, study our free book Malachi’s Message to God’s Church Today.

Never before has there been anything like this, nor will there ever be again, it says in verse 21 of Matthew 24. “And except those days should be shortened, there should no flesh be saved: but for the elect’s sake those days shall be shortened” (verse 22).

Notice what Mr. Armstrong wrote about this passage in the booklet mentioned above: “This is a prophecy, as it plainly states, for the last days. When I was a little boy, 90 years ago, those conditions were not true or escalating as they have been within the last 20 or 30 years. … The weapons have never existed in all history that could have laid all cities waste until the hydrogen bomb of some 30 years ago. How significant that this became possible only during the time while this gospel of the Kingdom was going from nation to nation into all the world for a witness to all nations.”

Numerous other Bible passages describe these frightful conditions, Mr. Armstrong went on to write. “Person is against person, even within a large proportion of families. Group is against group. Nation is against nation. Violence is escalating as never before in history. Terrorism is throwing fear and consternation into people all over the world.”

But all of this, Jesus plainly revealed, culminates in His literal return to this Earth: “And then shall appear the sign of the Son of man in heaven: and then shall all the tribes of the earth mourn, and they shall see the Son of man coming in the clouds of heaven with power and great glory” (verse 30).

Jesus Christ returns the same way He left this Earth 2,000 years ago (Acts 1:11). Only this time He’s not coming to die for mankind. He’s coming to forcibly put an end to human suffering and sin and to set up the glorious Kingdom of the living God!